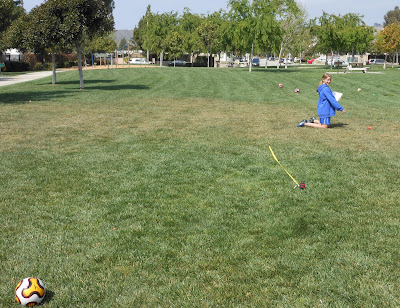 Alyssa doing her Science experiment at Thille Park
After the morning soccer game for Ayden at Anacapa, Alyssa and I searched for the perfect place to conduct our experiment.  We probed the local parks; Kimball and Camino Real and then finally settled in on Thille Park.  First, we jogged around the outer sidewalk (fitness trail) to warm up for the kicks.  We filled up one ball with air and the other with Helium.  Her science project  is to compare how the two balls and determine if they would react differently.  Our results we somewhat interesting; not what we expected, which makes this experiment even more impressive.  Once we finalize the results, I will post them on this blog...

I was feeling very strange during the day and by early evening I realized that I was quite sick.  A fever crept upon me and the cold chills took over my body.  Sleeping that night was horrible...

I called off work; something I never do.  I'm a die hard workaholic and very rarely do I feel at ease to skip out.  However, I was very sick.  The buzzing in my head would not stop ringing.  My temperature overnight was around 102.  The pain in my head was unbearable.  I had some chest and sinus issues but when I woke up in a puddle of sweat I determined that I could not work.  Alyssa and Ayden were also under the weather but by 9:00, Jess deemed Ayden school ready.  I took him to Poinsettia, walked around the campus and stretched it to a mile after dropping him off.  I wasn't in the mood to hike but thought that maybe I could kick this thing and still make it into work later.  ---Nah... never happened!

I was drenched by 7am this morning.  Last night I thought I was seriously dying.  The fever hit 104.  Sweat dripped in my ear and I felt like I was under water.  The chills were the worst part.  You bundle up because you feel so could but in reality you have an insane fever.  I only got up to go pee and when I did that, I could not stop shaking.

Miraculously, I decided to go to work anyway.  I showed up by 11:30am and stuck around till 4pm.  I came home, felt horrible but I still ate like a champ.  I then walked the dogs on the upper trails in the early evening.  Thanks to Daylight Savings Time, there was enough light to see around the uneven concrete trail.  I hate doing these duplicate hikes but at least I got one in and I am still barely above par for the goal.

I don't remember Wednesday at all.  I usually remember everything - even when I'm drunk.  I don't black out, I just always know what's going on, except today.  I do know that at night I mirrored my walk from night before but other than that, I couldn't tell you.  I come to find out that nearly half if not more than half of my department came down with the similar sickness.  It spread like a plague, insane!  I felt insane on Wednesday.  I suppose I remember feeling silly, like I had laughing gas or something.  However, I didn't take any medicine.  The fever was gone and the sweats were minimal.  The cough was there but the head was dizzy.  Not a bad dizzy thought, more like I was tripping acid or something.  Very peculiar?!

Where am I, who am I?  I was still all the bit out of it.  My son had a play at the school and I attended it.  Earlier in that day Alyssa ran her Jogathon and there was a school picnic.  I missed those events because I was working.  I was still very dizzy and for my hike I walked along the familiar upper easy Arroyo Verde Trail to complete the minimal mile.  I am now concerned because I have gone through all the duplicate days that I could without passing go.  I will need to do some serious hiking in the future to make up for this lag...

Feeling quite a bit better, I hung out with Ayden at his school.  We hiked around the place at a brisk pace and it easily winded me.  From there, we played a short game of basketball and some other playground games that he taught me and cheated on.  It was a good day and we called it an early night for the Palm Springs Adventure that would take place tomorrow...
Posted by Jeremy Jacobus at 6:16 PM