Miles: 1.5
Elevation Gain: 50 Feet
Time: 1 hour
Difficulty: Heavy Rains!!!
Reward: Swans, the secret of the lagoon and the ocean
Description: There is a trail between the Lagoon and the college.  You can follow this out to a nice beach.
Where: Goleta, CA (UCSB: Isla Vista)
Directions:From the 101 Freeway in Santa Barbara continue north toward Goleta.  Exit #108 Glen Annie/Storke Rd exit.  Turn left and follow Storke road a mile to the end.  Turn down the narrow road to the right (Slough Road).  This will take you right into the lagoon.  The area back here is ecofriendly and protected.  Look for a pull off to the right.  Do not block the gate because cars may come in and out.  There is a trail that follows the lagoon to the ocean: 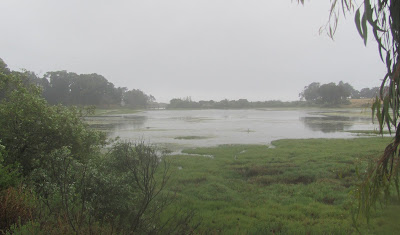 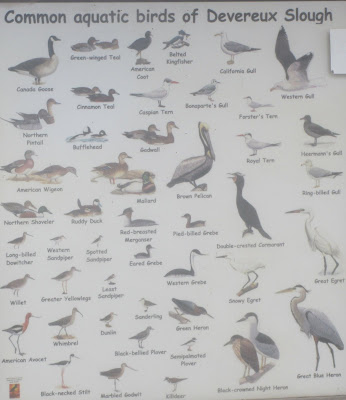 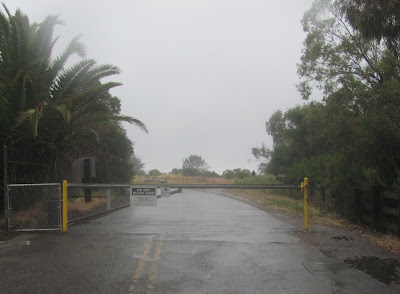 There are many patches of open space on either side of this lagoon area.  The Elwood Mesa/Sperling Preserve Open Space sits just to the west and there is a trail known as "Bluffs Overlook Trail" that offers miles of hiking.  My buddy Josh was spending the weekend with his lady and her family at El Capitan Canyon.  This luxurious resort is about 10 miles north (west) on the 101.  There are many undeveloped open spaces of land and beach in between to explore.  Unfortunately, I did not have a chance to meet up with JP between Alyssa's Tournament Games.

From the lagoon, if you head back to the Storke Road intersection, you can turn down El Colegio Rd.  Drive a few blocks to the east and then turn right on Embarca Del Norte.  This area is known as Isla Vista and the University of California Santa Barbara (UCSB).  After passing several frat houses you will run into several undergorund places to eat like; Freebirds World Burrito, Woodstock Pizza and a Steak and Hoagie Place.  We stopped to eat a Philly Cheese and the owner of the establishment explained that in 1977 he originally opened up the Steak & Hoagie hole-in-the-wall on Thompson in Ventura.  Over the last 30+ years, he has opened up 13 Steak & Hoagie places but he is now retired.  He opened up this one in Goleta for his son, but I didn't ask why he was the one working it.  I caught him on a bad day because his home in Goleta, an RV, caught fire due to some down power lines.  This likely happened due to the heavy rain that we experienced this weekend.  Although the owner lives in the RV in Goleta, he does own a home in the Santa Paula Canyon.

In his shop, I learned that the college students every year celebrated Floatopia at Del Playa Park, a beach at the end of the road.  Up until 2009, students and residents would bring there floatation devices and pack the beach.  The last celebration took place in 2009 because now the city closes the beach for that weekend.  Instead, he advised that the party continues on the streets.  Interesting, huh...

Continuing to the west along the beach after Del Playa Beach is: Window-to-the-Sea Park, Camino Pescadaro Park, Pelican Park and UCSB Lagoon.  Then after that is the airport.  Needless to say, there are a gazillion beach hikes and open space ventures between Santa Barbara, Goleta and then all the way up to Gaviota.  There are 10 fold as many mountain hikes from east to west.  In the months and years ahead, I must come back and conquer Santa Barbara County just as I have done with Ventura. 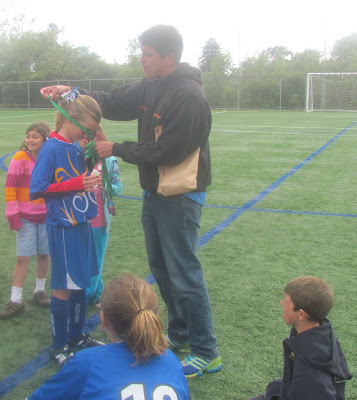 Alyssa officially turned 10 today.  She kicked in a count of 6 goals and 1 assist but the effort fell short of winning the title.  The Ventura Vipers proudly finished 4th place in this event.  The final game went into a shootout and we lost by 1.  An opposing parent posing as a photographer heckled our goalie during the shootout but the ref didn't see it.  This was a classless way for Pacific Palasades to take the medal.  It led to drama between the parents but fortunately it did not get out of control.

Posted by Jeremy Jacobus at 7:40 PM