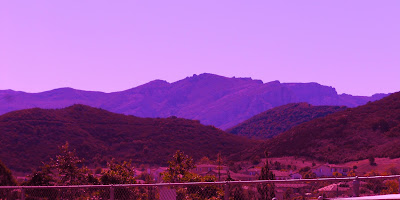 Another way of looking at Boney Mountain
I took Sky Hiker's advice to toy around with the color, contrast, brightness, etc...  I'm not sure that this is what he had in mind, but I think it turned out good :)
Day 328: ﻿Saturday October 8, 2011
Dos Vientos Community Park - Newbury Park
Avocado Festival - Carpenteria, California
Miles 3.5  +50 feet
***I'm dragging on these "hikes".  I've lost the vigor to push above and beyond mountains.  Yet, I feel like I haven't even begun.  Life has caught up, too fast, too much to do.  I've though about just hiking one legit trail a week and then I said no, I must accomplish this.  It would be too easy to slip back into a routine and do the same thing, in the same place every day.  Yes, I am essentially doing the same thing daily but at least I am doing it some place new, even if it is not all that exciting.
We were up at Dos Vientos this morning for Alyssa's soccer game.  Her Vipors won 4-2.  I marched through the park before the game and reflected on the surrounding rocky hills, mountains, where I once conquered.  It's awesome really; yeah, "I came from up there", a quote that I recited in one of the videos that I made.  That portion came from the hills beyond the park. 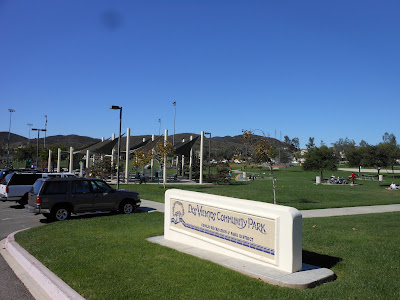 Later that day, we walked the closed off streets of Carp and enjoyed the Avocado Festival.  In doing so, I ran into a non-profit organization that is taking in donations to complete the "Franklin Trail".  This trail system will start at Carp High School and push up nearly 2000 feet into the mountains where it will meet up with another trail.  When I'm not too busy, I will forward some info to this blog... 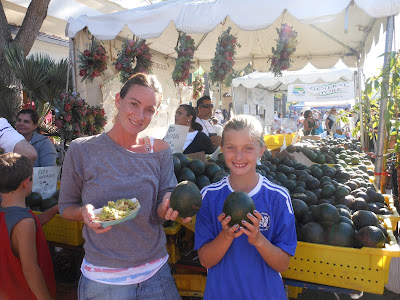 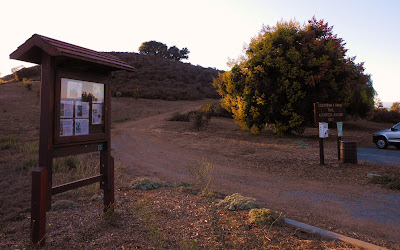 I know this trail has a name but I was too lazy to look it up
This was the first legit trail that I hiked in a while.  It felt great and at the top near the water tower is an alternative way to loop around and explore.  I purposely did not take this so I can come back for another visit.

Views from of Newbury Park from the trail

Day 326: ﻿Thursday October 6, 2011
Camarillo High School 3-Mile Run
Miles 4.0  +50 feet
It's a hike to reach the track from the far lot off Adolfo.  I've been running, but I've been eating and unlike my usual motivation, I am not pushing myself; hence the splits that I recorded:
1-Mile: 10.22.18
2-Mile: 10.31.65  (20.53.83)
3-Mile:   9.45.24  (30.38.07)
--My final quarter was rounded in 1.54.82  --I'm just not in the mood.  Never in the past have I raced myself to not better my previous time.  I didn't know how to run unless it was a race.  Well, looks like I just did and as you will see, I've been like this for a week+ now; mild depression I suppose.  I don't even really want to update the blog anymore.  Here I am editing Alyssa's Soccer video and this hiking thing has really become a drag....
Day 325: ﻿Wednesday October 5, 2011
Calle La Guerra - Camarillo
Miles 1.5  +25 feet
It had rained earlier today and I actually brought my rain gear looking forward to hiking a muddy trail during a downpour.  Unfortunately, this is California and the rain had subsided by the late afternoon.  Actually, the sun was out so I began my journal today at the small community center at the end of Calle La Guerra.  I ran through the small park and around the neighborhood.  I didn't bring a camera because I wasn't even about to go there, due to the forecast.  --I became bored, my jog took to the streets and ended with a walk.  Hoping to train for 5 miles, I ran about half and then just walked one... 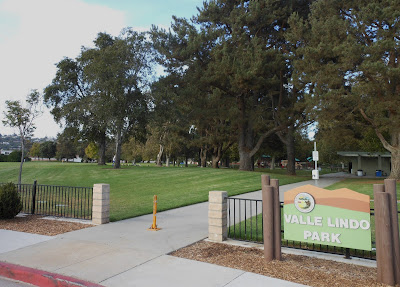 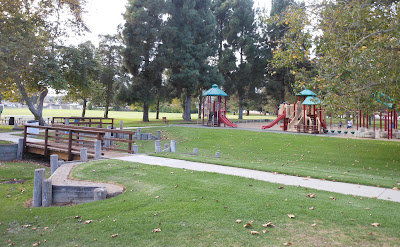