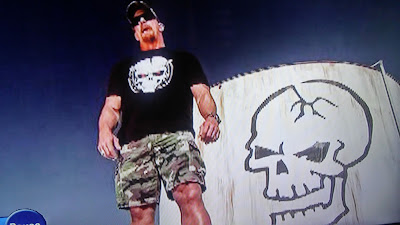 Here's a couple of links to check out the show:

Directions and Purpose
We were in Santa Clarita for our daughter's high school track meet.  One of my wife's favorite shows is the Steve Austin Broken Skull Challenge.  She discovered that the filming for this "Texas" ranch was located in Santa Clarita.  Although Steve does live on the Broken Skull Ranch in Texas, he films the show at the Agua Dulce Movie Ranch which is located on Petersen Road, just off the intersection of Mint Canyon and Sierra Highway, where Agua Dulce Canyon Road ends.

Driving down Petersen road we noticed this dirt hill with an iddy-biddy sign off to the left, the pic above.  We passed this, headed down the road 500 feet but of course, the gate to the ranch was locked.  Well, let's make a hike out of it and see if we can gain a greater vantage point... 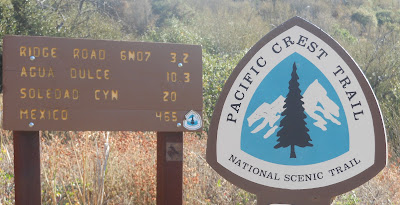 You will follow the dirt road under the power lines for more than a half mile.  You will see the filming area below.  It looks a mess, but with smart camera angles, this - junkyard transitions nicely.

Finally - now I can call this a legit hike!  It took some convincing, of Jess, to tell her that this trail would wrap around to the back part of the ranch.  Although it was obvious, several other single tracks led down to the private property, for now - we are Hiking! 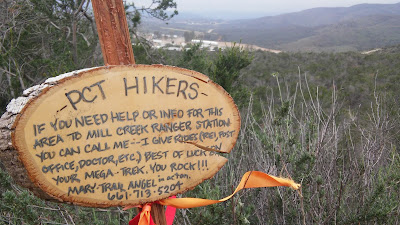 My cell phone camera does not do this justice.  I don't have an IPhone and I no longer take the time to use my great camera that I urged for, which would have really brought to life the feel of the scene here today.  It was a magnificent grey-blue tone overcast sky shadowing light over the greenish pasture.  From the somewhat rainy season we have, I'm sure by late summer this place would be brown and dry. 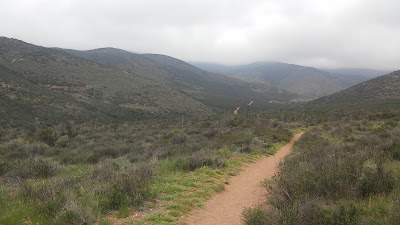 My hunch was, just a little bit further, this trail will intersect the canyon floor and we could walk back over the Broken Skull Course.  However, I had been saying that for the past five minutes and my wife was not a believer.  Thus, we turned around :(

We did head down to the canyon floor, for a moment, but Jess got scared and forced the turn back.  Well true, there were bulls, horses, life - happening.  There was a house, someone was home, so back to the car we went.  But, from here, how does the PCT continue?

The PCT crosses Sierra Highway and the follows the dirt sidewalk for about three miles to Valasquez Rocks... 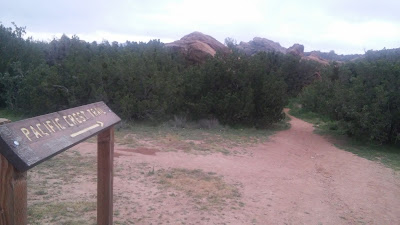 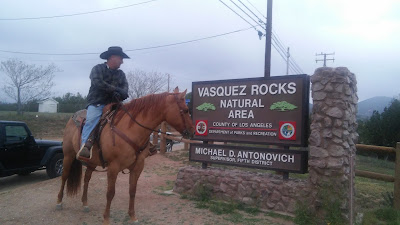 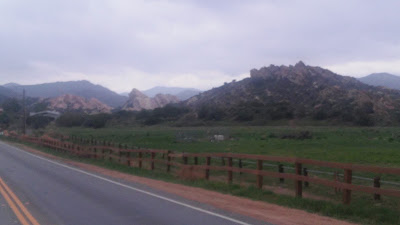 I remember day 126.  It was a rainy day - Alyssa had a soccer tournament in Palmdale and I convinced Jess to turn down Agua Dulce to see these rocks. I then learned about the PCT trail being here and despite the rain, I really wanted to hike it.  But, she was not going to wait and I know her, she would have left me.  It was then when I wanted to quit my 1000 hikes in a row, but I didn't - obviously.

One day, I will come back to Agua Dulce, hike the PCT through the tunnel under the 14 to Soledad Canyon - and Beyond!

Posted by Jeremy Jacobus at 5:20 AM