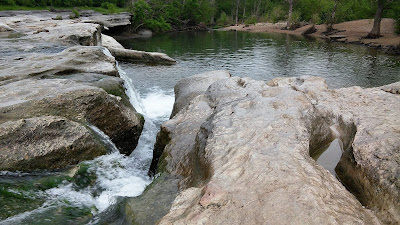 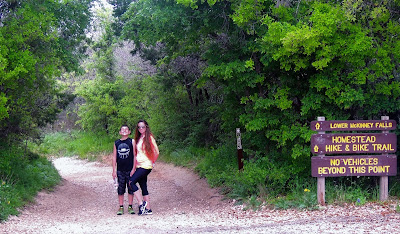 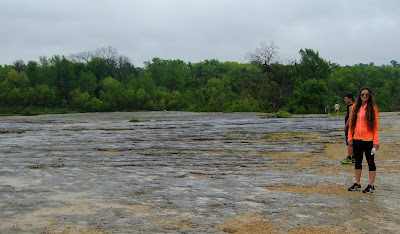 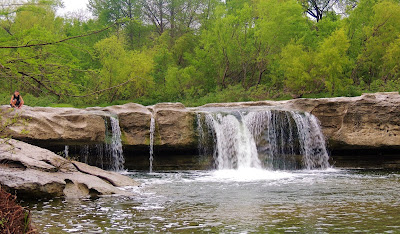 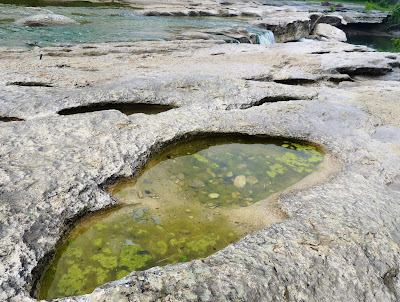 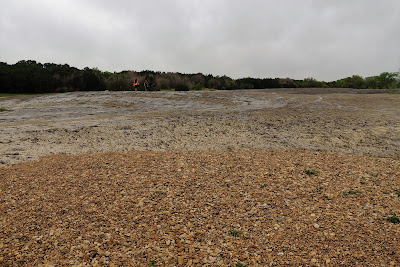 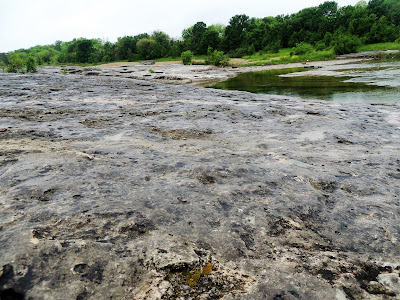 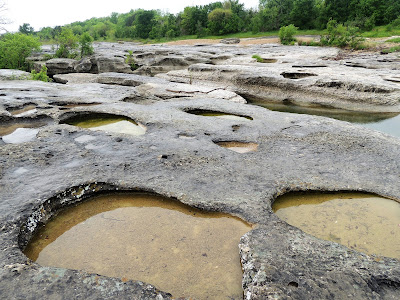 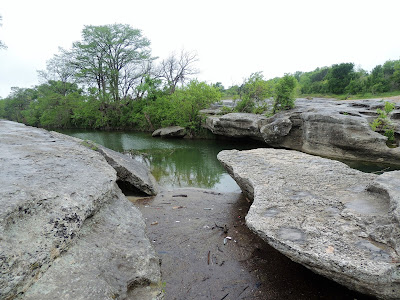 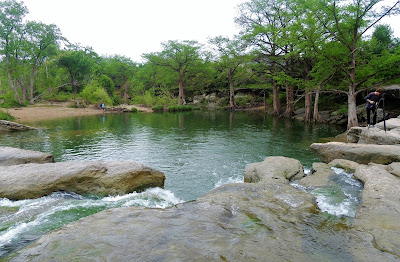 Just south of Austin, McKinney falls offers an awesome escape from the crowded city life.  I can imagine the brilliance, and danger, of this place when the rains storm in.

After seeing my cousins the night earlier, we rushed to this location in hope to get there by 10:00, before the gate is locked.  You are able to park overnight within the park but if you do, you will then be locked in.  Well, that didn't matter because we got there around 11pm and the entrance was already shut off.

We parked/camped in the turn around area and about a quarter til 5:00, an officer knocked on our window.  Rory, a very fair cop, allowed us to stay the final hour and he came back to open the gate for us at 6 am.  We paid $12 in the self pay envelope and then drove to the Lower McKinney Falls Trailhead, where we went back to bed for a couple of hours.  The pictures above represent our short little adventure, and then we drove around to the Upper Falls for a quick walk: 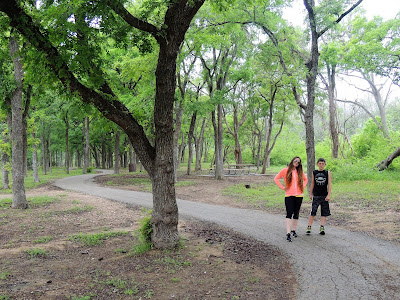 We did not go far, long travel day ahead of us - heading to the desolate region of, West Texas.  But first, before leaving this plush environment, one more stop: 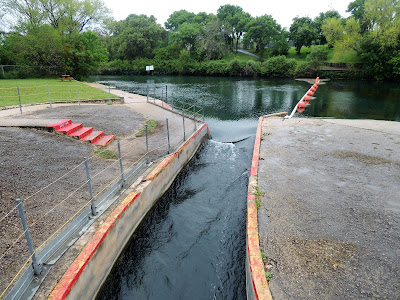 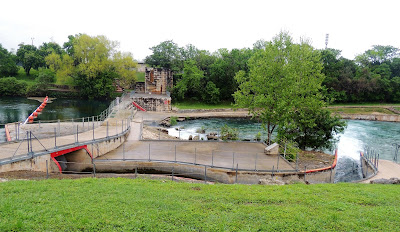 My next surprise for my wife and son was to float in a tube down the Comal River.  The water slide shoot, I knew, was closed until May.  But, according to the website, renting a tube and floating down the river was possible.

Some say that this is the shortest river in the world.  It is said to be fed by natural springs which keep the river warm at 72 degrees year round.  However, as you can see by the pictures, the Comal is not in operation on this day.  Instead, Ayden and I wandered about for a bit - since we were here and all... 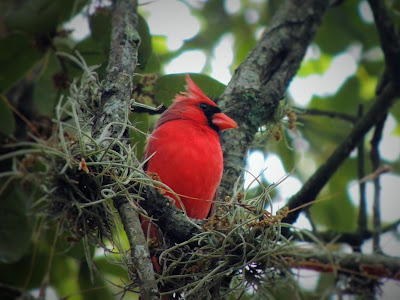 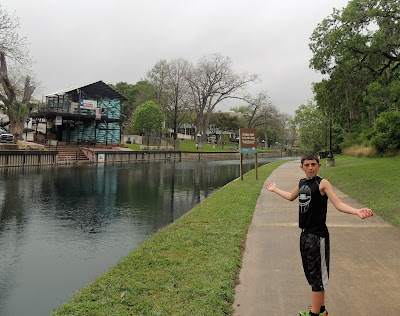 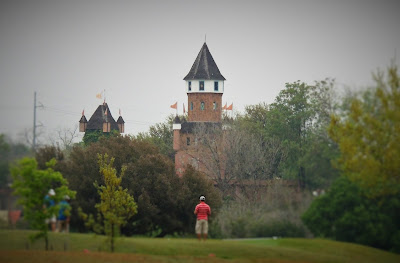 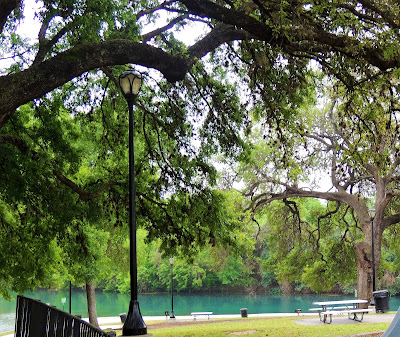 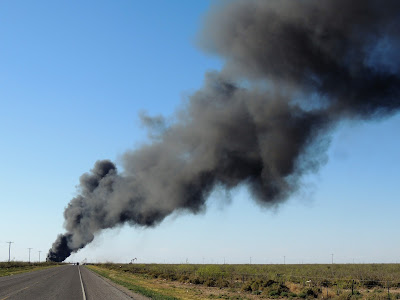 I first saw the slight of smoke, a white transparent trance low on the horizon well over 100 miles away.  Leaving the San Antonio - Austin area, it was raining very steadily and the landscape was green and alive.  However, traveling West on the I-10, the rain stopped about an hour or so out and another hour thereafter, so did Earth;s hospitality.

Just as in Cali as you drive away from the coast, you reach desert.  Well, Texas was no different and the further we drove, the shorter the trees became, nothing, but cactus and blah.  The flat land remained mountain-less, but elevation slowly began to increase.  Beyond the fog that I saw, that Jess could not see, and for me, thought I was just sensing something was not, appeared the Rocky Mountain Range 100's of miles past.

Tomorrow's journey called for a summit to the highest peak in Texas.  To get there, we needed to turn off the I-10, drive through the town of Pecos and so on - but as we got closer, perhaps 30 minutes off the interstate, an oil fire blocked our path... 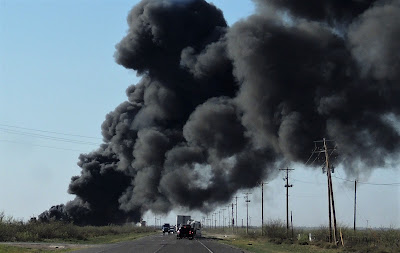 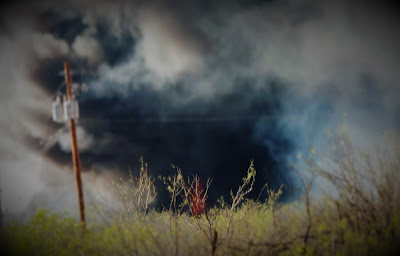 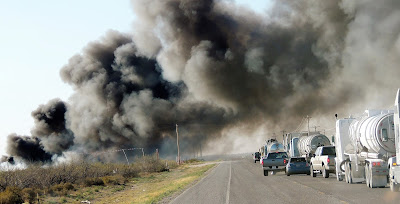 Well, this looks safe.  Oil tankers parked under an out of control fire - and I was taking pictures!!!

You could see the street was clear, just let us through, but Not!  eventually we turned back, but no way I would want to go all the way back to the 10 and then take the next road up.  It would be a forever task.  So, looking at the map on my phone, perhaps there was a road that cut through?  And we did, found an F.M. route that was paved, for a few minutes, then dead-ended on a county road, dirt road, in an RV.  Nope, not turning back!  We zig-zagged on these roads, in the middle of nowhere oil fields, about an hour before sundown and less than a quarter tank of gas.  After 30 minutes or so, this did become quite nerve racking - and our RV was shaking nonstop like an earthquake due to the road condition.

Ha, but we made it - all the way to Pecos.  Filled up the gas tank, stopped at a Walmart and walked around for a bit - just to stretch these legs.  I figure along with what I did earlier that day, I easily accomplished my 2.5 miles and +100 foot goal for the day.  Take it.

Then, the night drive from Pecos to the Guadalupe Peak Trailhead, where we marked camp for the night.  Yes, a long day of travel - sleep at 5500+ Feet...


-Although Foolish, the Chance Paid Off, this time...
Posted by Jeremy Jacobus at 5:24 AM