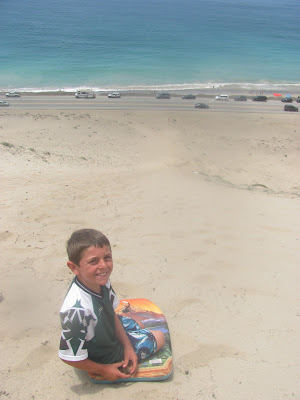 From atop the Great Sand Dune!

Miles: 5.5
Elevation Gain: 750 Feet
Time: All Day
Difficulty: The Sand Dune is very steep, It was very hot and I went the wrong way at Nicholas Flat
Reward: Sliding down the Great Sand Dune & Dolphins at the refreshing Zuma Westward Beach
Description: All day holiday weekend in Malibu
Where: Malibu, CA
Directions:From Ventura County, make your way to the PCH (via Las Posas or Rice Road from the 101).  Because the Rice Road ramp is currently closed, we exited at Del Norte, turned left on 5th and turned right on Wood.  Wood ends at Pt. Mugu Missile Park at the PCH; get on and go towards Malibu.  First stop, the Great Sand Dune.  This will be on your left about 5 miles up (you can't miss it)... 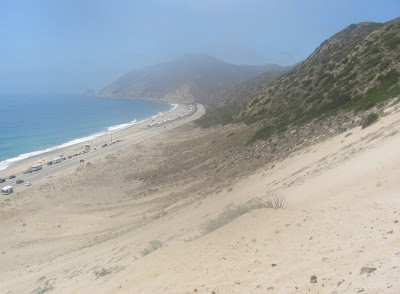 Looking back at Mugu Rock
June Gloom on July 2nd; typical.  At least in Malibu you can see the sun.  From my house in Ventura, the ocean looked like a cloud of smoke.  It made me think of the Mistake on the Lake (when lake Erie and the Cuyahoga River caught fire).
The sand on the dune was quite deep, so walking up to the top was not easy.  Slow, steep & deep footsteps climbing up around 100 feet.  Think you'll slide down this hill like a sled in snow, think again.  Not possible.  Instead, I ran down and pulled Ayden on the boogie board.  Only problem was, my feet were kicking sand up in the air and he was literally eating my dust.  Eventually, he let go and with the instant loss of weight, I went flying.  I took a tumble, hit my arm against a rock and landed with my face in the sand.  I survived, so did he :)
**Next on our holiday shopping list will be a short hike to Nicholas Flat.  From the Great Sand Dune, continue south on the PCH.  Another 5 miles or so turn left on Decker Canyon Road, Route 23.  Drive up a few miles, around 1500 feet of elevation.  Look for the sign on the left for Decker Camp Grounds.  Keep going another quarter mile and then turn off to the left onto Decker School Road.  This street can be hard to see.  As the 23 swerves a turn to the right, Decker School Road will be nearly straight ahead over a hump.  Be mindful of traffic that you cannot see coming downhill.  Once on Decker School Road, take this all the way to the end and park: 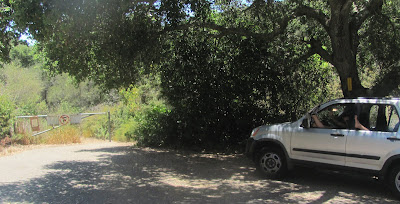 The Trailhead
There are two trailheads.  My goal was to hike to a small lake so I ventured down the trail on the left.  According to the map, this would be a short 0.3 mile hike and then loop on a pretty level flat area.  At 1500 feet, the June Gloom was completely burnt off and the temperature was over 90.  The wife and kids wanted to stay in the car which allowed me to run the trail.  I should be back in 20 minutes... 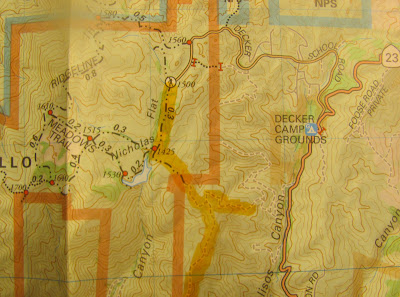 As you can see by the orange highlighted route that I took; I went the wrong way.  At the junction 0.3 miles in, I was supposed to turn right but instead I kept straight.  I ran down the open run under the bright sunlight.   I probably ran down 300 feet until I said, forget about it.  I hiked back up and then took another split to the right (which lead me further away from my destination).  Still, I was hopeful that I was going to find the lake so I ran down this hill about 200 feet until I said, forget about it.  It wasn't until after I came back to the car, 45 minutes later, that I realized I went the wrong way.  I ran so hard that I felt like I was going to puke, but I didn't.  Here are some pictures: 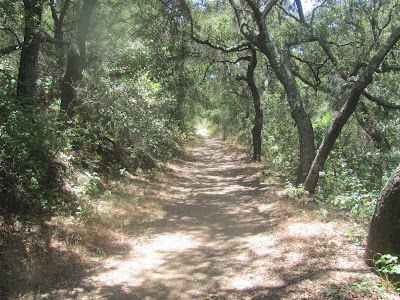 A cool shady start to my jog 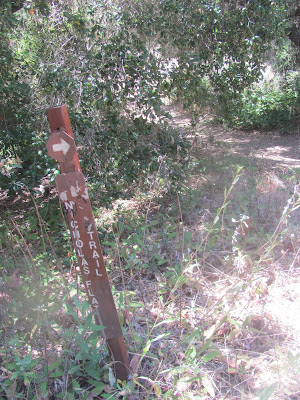 The turn I missed
The only problem with jogging is, you miss the little things; Like Small Hidden Signs!  I snapped this picture on my exhausted was back.  Before I wandered into the wild, I looked at the map and was expecting this junction at 0.3 miles in.  For some reason, I thought I was supposed to go straight... 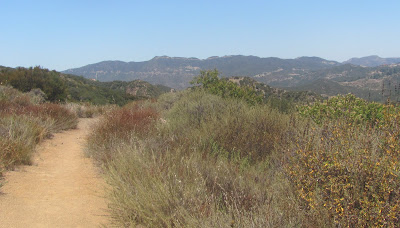 Into the open under the hot sun 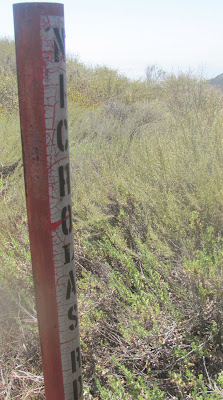 Decker Canyon Road off to the left
At this point I realized that the trail is only going to keep going lower.  So, I turned back.  Rather than quit, I then went up a junction that I had passed earlier.  However, that road then started going lower.  Hmm, maybe the lake is down here?: 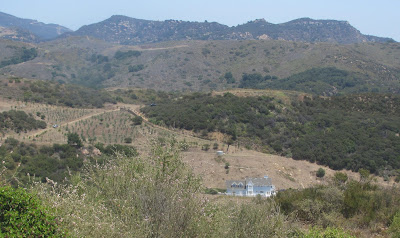 ...No lake, just a house in the middle of nowhere 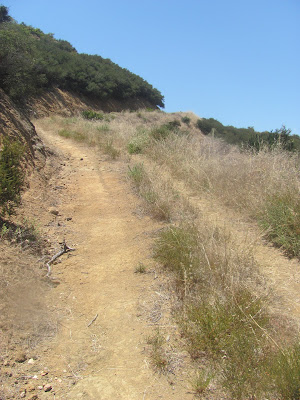 Turn around, climbing back up again! 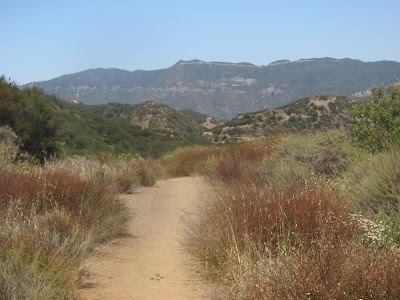 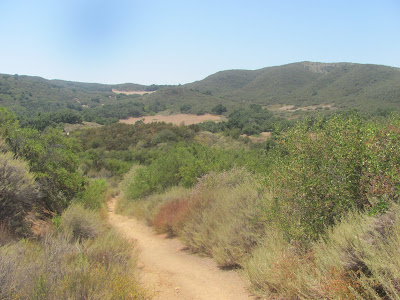 Nicholas Flat ahead
Of course, I didn't turn down the skipped trail.  I probably should have.  According to the map, the lake would have been less than a quarter mile away!  You know what, I will be back.  I did not see one other person in this area.  I never heard of this area before.  It was only by chance that I bought this map and discovered what should have been a short, easy family hike.  --The day is not over yet, let's head back to Malibu: 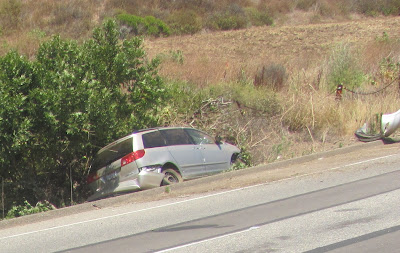 The ambulance had just pulled away 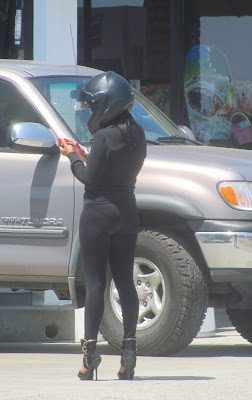 Lady Surfer wearing a wetsuit, high heals & a motorcycle helmet
The beaches were packed on this hot holiday weekend.  Although June Gloom remained at Leo Carrillo all day, just a few miles south the sun burnt off the misty layer.  We stopped at Starbucks on the corner of Trancas Canyon Road and PCH.  Instead of paying for parking at one of those popular, overcrowded beaches, we searched for a local private beach.  Across from Trances Canyon Road is Broad Beach Road.  We drove down the narrow residential street and found beach access: 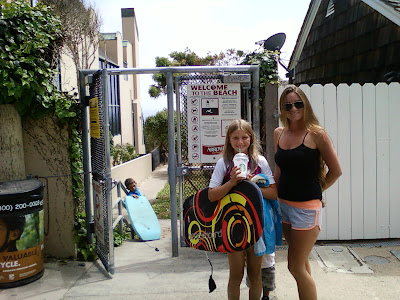 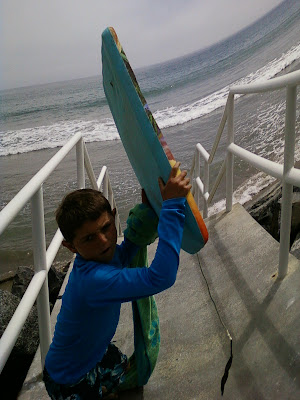 Ayden was attacking me with his boogie board.  --This beach was no good because it was nearing high tide.  A local resident said that it would be low tide at 8:00 pm; yeah, we are not waiting.  So, we drove further down the PCH and just past Zuma Beach and Busch Road, turn left on Westward Beach Road.  While cars were lined up at the pay gate at Zuma, which created a backup on the PCH, we drove down Westward and found a spot on the street for free.  It took a couple of back and fourths but once there, we were in paradise.  Unlike some of the other beaches, the sand was not overcrowded and we had plenty of room to do what we do. 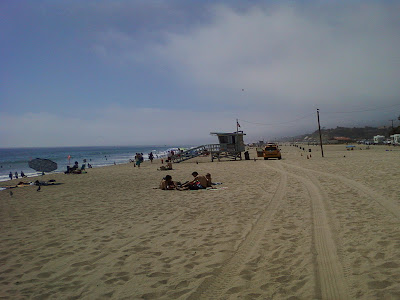 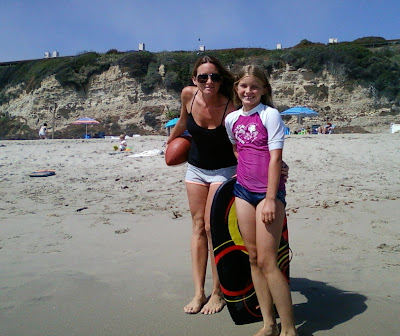 Alyssa went boogie boarding while Jess and I played football.  My girl has an arm and caught most of my passed.  Meanwhile Ayden was building sandcastles, something he used to do when he played T-Ball.  --There were about 10 dolphins in sight the entire time.  They kept swimming back and forth.  We took the kids to see "Sole Surfer" the night before, a movie where a kid surfer lost her arm from a shark attack.  Fortunately, that did not deter our kids from going in the waters, even with circling dolphins.  At one point, the dolphins were racing and jumping waves.  The picture below shows how close they came to Alyssa.  I was using my camera phone so the resolution is blury, but those four humps over Alyssa's head are dolphins! 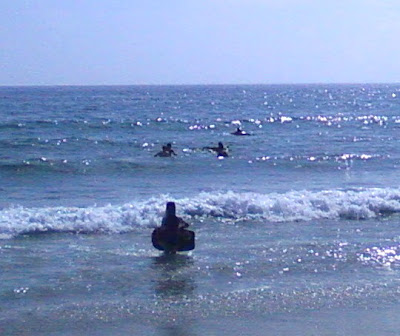 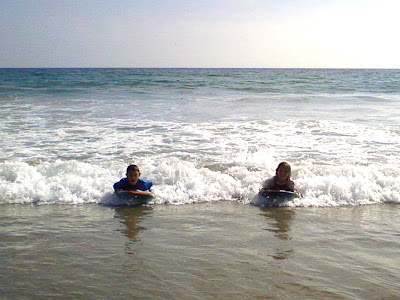 Ayden finally made it in the water and rode the waves.  A perfect day in California; can't wait to do it again!
Posted by Jeremy Jacobus at 9:41 AM