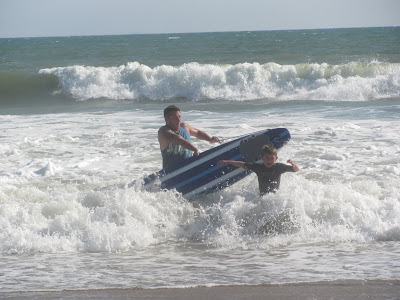 Miles: 3.0
Elevation Gain: 150 Feet
Time: 35 minutes
Difficulty: Fairly easy trail, but it was hot!!!
Reward: A good afternoon jog
History: This area supports the Pentachaeta Lyonil, an endangered yellow flower only found in Southern California.  The flower blooms in May to June.  I've seen it on many of my trails over the last few months but I didn't actually notice it in this region today.
Description: Follow a slightly steep trail into the sun up 80 feet.  On top, very little shade and you will drop down and up again.  1.5 miles later, you will lower to the shaded other side.  You can loop back through the shaded mobile home park.
Where: Westlake Village, CA
Directions:From the 101 Freeway in Thousand Oaks, depending on which direction you are coming from, exit on Westlake Blvd or Lindero.  From Westlake Blvd, head south and then turn left on Tirunfo Canyon.  From Lindero, head south.  Lindero and Triunfo Canyon dead end at each other.  The trail begins across the street... 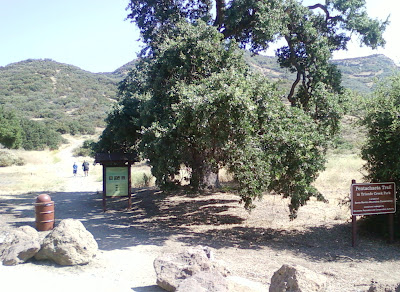 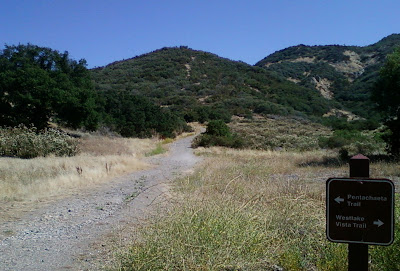 The Pentachaeta Trail; discovered the Westlake Vista Trail for next time 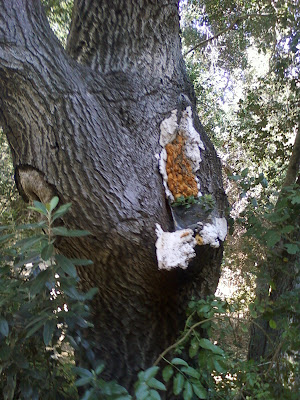 This bees nest marked the end of the trail 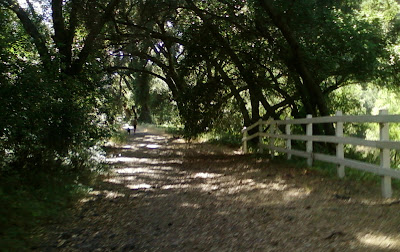 Turn around; some strange guy was talking to himself here?? 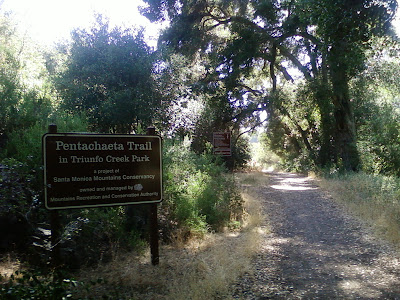 I took the lower right fork back 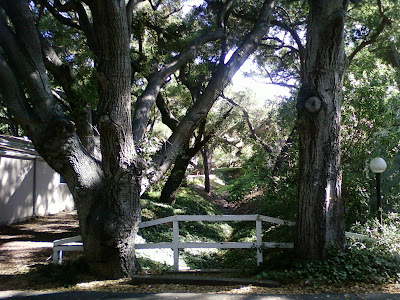 In the mobile park
The first 1.5 miles had just enough hill to really give the legs a good workout for the jog.  That said, I was able to keep a pace up all of the hills but don't let this fool you.  You'll probably end up walking a good part because it's so darn hot here!  The footing is ok, a bit rocky but nothing too crazy.
The 1.5 miles back was much easier but I did attempt to make my own trail once I reached the mobile park.  I climbed up a bit and then said forget it.  Jogging thru the park was the only reasonable way.  There was a small creek, nothing spectacular.  All in all, this was a good little run to build up some sweat, pump up the heart and tan my natural olive-tone skin.
Rewind:::
Day 236: Friday July 8, 2011
Surfing at San Jon in Ventura & Hiking at San Buenaventura Beach
Hiking (jogging): 3.0 miles  +25 feet  --  Surfing: ???
From the 101 Freeway in Ventura Heading North, exit on San Jon.  Turn Left at stop sign, Right on Harbor and Right on San Jon.  Park under the bridge.  If you are coming down from Santa Barbara, you must exit at the first Main Street exit in Ventura and head down either Thompson or Harbor to San Jon.
Before hitting the waves, I jogged along the beach, circled the park across from the In & Out Burger and ran back along the promenade.  **Ayden was eager to go but the wind had picked up and the waves were quite choppy.  Surprisingly, the water was 67 degrees, atypically warm for this pacific coast.  It felt quite refreshing but at best, I could only reach my knees.  Ayden and I did not try to go out beyond the break to really sense what riding a wave was.  Basically, we rode the waves like boogie boards.
Day 237: Saturday July 9, 2011
Camarillo Model Airplane Field
2.5 miles +250 feet
Earlier in the day, Ayden had his first diving competition.  On a back somersault tuck from the 1 meter board, a judge gave him a 4.5.  Congradulations Ayden!
...I was told beyond the model airplane field off University Drive at Cal State Channel Islands in Camarillo, you will found a single track trail which will eventually lead you to the peak.  I went with my son to see the airplanes on this hot day and then we took a long death march.  This post confirms that beyond the road toward the mountain side you will find a single track trail.  Problem is, after Ayden's 20 mile death march in Rosevalley, no chance he was done to climb this peak.  So, we turned back and had McFluries and Mac Donalds!
Day 238: Sunday July 10, 2011
Trails off Las Virgenes & Mulholland Highway
3.5 miles  +350 feet
Today Jess and I took a LONG motorcycle ride.  After doing some shopping in Ventura, Camarillo Outlets, Thousand Oaks and ate ice cream, we exited the 101 at Las Virgenes.  Damn it’s hot!!!  Mid 90’s, just a guess?  Hot, on a bike with jeans!  Immediately off the freeway is a trail heading right up the hill.  We checked it out, hiked a moment and then decided, I’ll do this another day.  We continued down Las Virgines towards Malibu.  At the corner of Mulholland there are trails on either side.  We walked a bit on the Southwest side of the intersection and discovered that this area is Malibu Creek State Park.  On the higher, dryer, un-shaded side is another trail that leads back towards Calibasas.  Walking it was dreadful so we stopped.  We then rode down Mulholland to the east.  Along the way, we saw this view point: 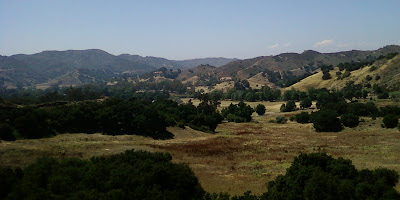 There were signs talking about how the Chumash Indians hunted here 6000 years ago.  There was also a map and we set course to the Stunt Trail.  We rode a few more miles down Mulholland and then a sign pointed to Stunt Road to the right.  It comes up very quick!  We turned down Stunt for about a mile and then Parked on the right.  Leading lower on this side of the road is the Stunt Trail: 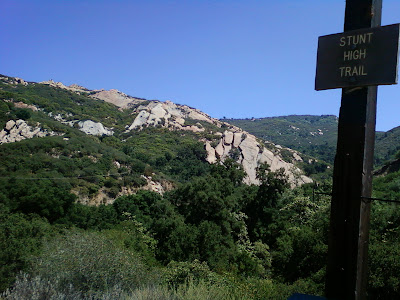 Across the street is a trail that leads up to Calabasas Peak & Red Rock Canyon Park: 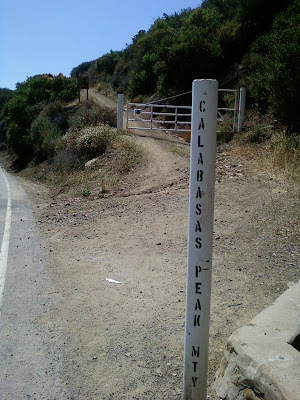 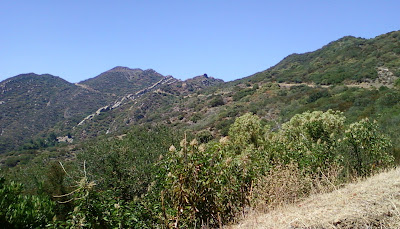 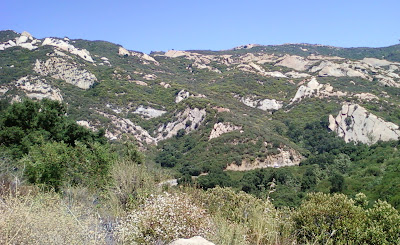 After Hiking some of this, it was time to jump back on the bike to look for a good place to eat.  We followed Mulholland Highway to where it ends on Mulholland Drive.  We turned left back towards Calabasas.  We then crossed under the 101 and turned right on Ventura Blvd.  Eventually, after zigzagging around the neighborhoods, we ended up on Topanga Canyon Blvd.  We found a neat little Italian Deli: Cricca’s, located at 4876 Topanga Canyon Blvd.  This is located in Woodland Hills.  Damn it was hot!!!
We checked out some open houses in the neighborhoods, always fun to do!  Finally, 120 mph+ back to cooler weather.  We finally felt relief after coasting down the Conejo Grade.  Once back to Oxnard, we went to Sports Authority where I picked up some new soles for my shoes.  In my honest opinion, the absolute best sole to wear is the Airr performance insole by SofSole.  Make sure you buy the one that says “Airr” on the package.  No other sole will compare.  I’ve run a marathon and hiked a marathon+ in these.  Trust me, for $25, your feet will thank you!  SofSole should sponsor me…
Posted by Jeremy Jacobus at 11:18 PM