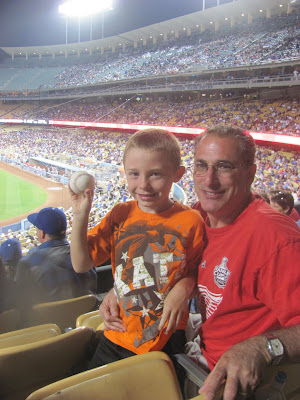 For over 30 years I have gone to over 100 ball games and "Prepared" for this moment.  This was a Father/Son day for us; it began with his dive meet, we added a hike in the middle and concluded with a Dodgers Game.

In the top of the 2nd inning, Arizona Diamond Back 2nd Baseman Kelly Johnson fouled a ball back behind home plate.  With one hand in the dibs cup that Ayden and I were sharing, my reaction time was instant.  I stood up on my tiptoes and leaned two seats over.  It appeared that the ball was sailing higher.  However, it came down and deflected off the top of my wrist, just below the leather of my trusty glove.  I felt dismayed, shocked; I did not "Execute".  The family in the row in front of me was scrambling around.  The moment lasted forever.  I glanced and saw nothing.  According to my son, the ball slowly fell from my wrist to our feet and then dribbled below the seats in front of us.  And then it happened; the family found the ball and the father (Steven) stood up proud and held the ball high in the air.  The crowd in our section cheered and I felt dumbfounded.

Congratulations to Steve and his family!  He has gone to baseball games his entire life and this is the first foul ball that he will be going home with.  Just an inning earlier, I heard him talking smack about the Cleveland Indians.  Well, my son and I were wearing Chief Wahoo hats so I assumed he was talking about us.  Thus, I spoke out.  Come to find out, he is a Michigan guy and was talking about his 1st place Detroit Tigers in the AL Central.  We come from similar backgrounds; Ohio State v. Michigan is arguably the greatest rivalry in all of sports!  --There's no hard feelings here and I am glad that the ball went to a good guy with a family :)!

Another father sitting two seats over reassured me that the ball was over his head.  My son said that I jumped but the bottom line is, no excuses, I over extended.  This ball was floating and when it hit me, it didn't hurt nor leave a red mark on me.  **I've never caught a foul ball before.  The closest I have been was at the old Municipal Stadium in Cleveland.  While my father was in the restroom, a ball was fouled back and coming right at me.  The trajectory was targeting the walkway in front.  Just then, the hot dog vendor was walking by and rather than shouting out or leaning over the easy railing to catch the ball, I just sort of stood there and watched the ball hit the cement about 2 feet from the guy and then it bounced back to the upper deck.  I was young but my lack of confidence then could have caused certain injury to the worker.  Fortunately, nobody got hurt.

At the old stadium as a child, we often sat in the $2.00 General Admission Seats next to the foul pole.  Back then, it was common that less than 5000 fans showed up for the game.  The park attendants were firm that you had to stay in your seats (first come first serve), but when the ball was hit in foul territory, the race was on!  There were no fans sitting in dozen sections separating the pricey box seats to our section.  Many foul ball were hit over that way and I did come home with souvenirs on several occasions.  However, I used those balls to play stick ball with my friends and I no longer hold the possession.  Further more, I did not share the event with my son and in my opinion, it only counts if you catch the direct shot.  --I am on a mission--

**It was less than a month ago when a fan leaped out for a ball in Texas.  He was at the ballpark with his 7-year-old son.  Sitting just a few sections over was former President George W. Bush.   Reaching over the railing, the father fell 20 feet below and landed on his head.  He told the paramedic, “Please check on my son. My son was up there by himself.”  Less than an hour later, the father was pronounced dead.  I can't imagine how that moment will alter the boy's life forever.


There's something instinctual about going to the ballpark in search for that foul ball.  This was a most horrible tragedy and I'd like to send my heart and condolences to the family--- 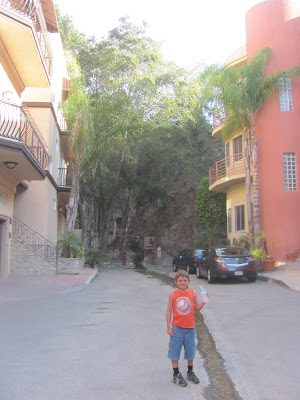 Trailhead
Directions:
From the 101 Freeway in Sherman Oaks, exit on Woodman and drive a half mile to Ventura Blvd.  Turn left on the boulevard for another half mile and then turn right on Dixie Canyon Ave.  About a mile up, take the road will circle back but turn left up Dixie Canyon Place (No Outlet Sign).  At the end of the road is the trailhead.
You will notice water running down the street in the middle.  This comes directly from the tiny stream along the trail. 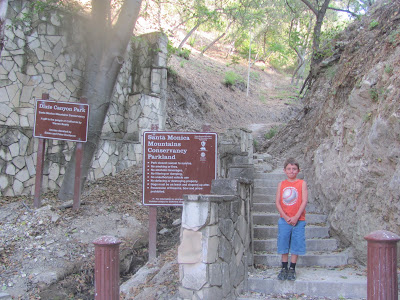 Walk up the stairs to begin the short journey 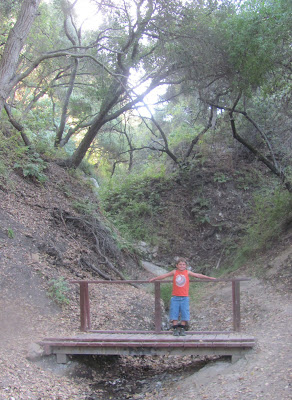 The bridge of decisions
Heading back up the easy graded hill, you will reach this bridge.  We crossed and then switched back to the left.  A ways further, you switchback several times up about 200 feet.  This is very easy but in some places, the trail is eroded so keep one hand on your son.  The all shaded trail is a pleasant relief.  Up top, we circled to what I call a switchover.  We then began to descend to the other side of the canyon and wound back up at the bridge.  I was expecting to reach the top of this canyon and hope to take a picture of the distant San Fernando Valley.  We walked past two other hikers and they said that they had heard there is a way to climb up to Mulholland, but they looped like we did.  So, Ayden and I continued our adventure up past the bridge.  We followed the stream a ways but the footing was treacherous.  We could have gone on further but it became wildly overgrown and we had a baseball game to get to :).
I discovered this hike many months ago on David's blog:  Dixie Canyon by NobodyHikesinLA.com

This was the perfect easy hike before the game... 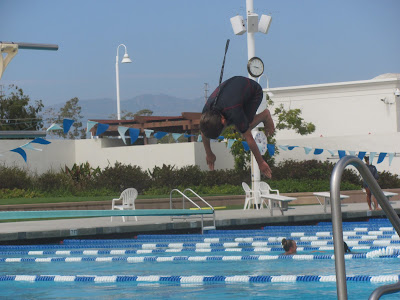 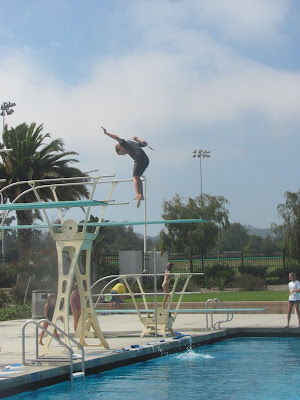 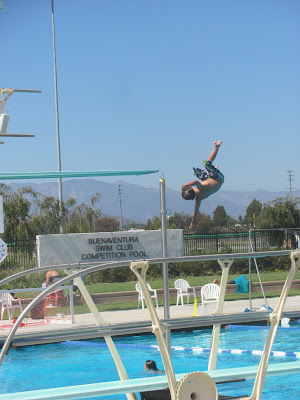 Early Saturday afternoon, before the hike and ballgame, Ayden competed in his second diving competition.  These pictures are of his practice dives.  I video taped his competitive dives.  During practice, Ayden hit his foot on the board while performing a reverse inward dive.  It was a painful injury which caused a bloody cut on his heel.  Nevertheless, Ayden performed 5 dives and completed them all.  In the 2nd round, he performed a back dive and scored: 4.5, 4.0, 4.0.  Out of nearly 30 competitors, approximately 10 divers attempted this jump in the 2nd round.  Ayden's score was the highest.  He even beat out the more experienced teenagers.  Good Job Ayden!