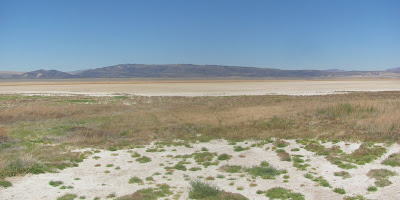 Day: 245 Sunday July 17, 2011
Harper Dry Lake – Mohave Dessert
1.25 Miles  +25 feet
If you live in Southern California, chances are you have taken a Vegas weekend get-a-way and your drive back on Sunday afternoon took twice as long as your drive in.  Over the years, I’ve discovered ways to exit on Zzyzx or other side roads when the 15 becomes bumper to bumper.  Essentially, you will parallel the freeway along Yerma Road to bypass the congestion.  Of course, my trials did not always go as plannedl.  I once drove over 40 miles in a horseshoe to climb a mountain on a good road that turned into a dirt/gravel road.  **Nevertheless, it’s always fun to try something new.
So on my trip back this time, considering Carmageddon with the 405 shut down, I decided to take a new alternate way.  In the past, I would take the 18 to the 138 to the 14.  Basically this takes you from Apple Valley to Antelope Valley.  This is not a bad alternative  even if there is no traffic congestion.  However, when the 15 is just being stupid, you want to exit whenever, wherever.  Thus, after I drove Yerma Rd and then rejoined the 15 again, I then exited in Barstow on Highway 58.  You have the option to exit early on Old Hwy 58; your choice.  This route will smoothly sail you across the Mohave Dessert and Edwards Air force Base.
Directions to Harper Lake:
From the 15, approximately 20 miles from the Old Hwy 58 exit, or 12 miles from the actual route 58 exit, you'll see a brown sign with binoculars on the right.  We decided to take our chances and turned down Harper Lake Road.  The sign said that there was a wildlife viewing area 8 miles up.  The first 7 miles was on a pretty well maintained straight paved road.  Then you are directed to turn right on a dirt road.  The road was in very good shape so any vehicle would be able to access it.  No more than a mile later you reach this sign, turn left and park: 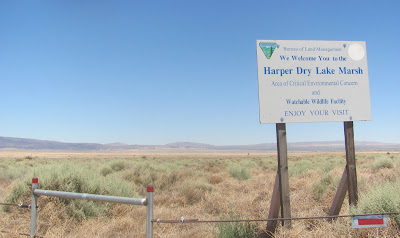 Parking lot entrance
It was a dry, sunny 90 degrees and no one around for miles.  My wife and kids elected to stay in the van while I jogged the gravel trail.  As soon as I exited the van, a large rabbit, a Jackrabbit hopped and scattered away.   A short hike away you will reach the first of three boardwalks stretching over the dry lake: 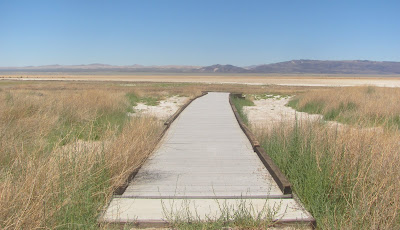 First of three boardwalks
The sound of Silence; it was remarkable.  You hear this in nature all the time, but to see clear for 100’s of miles on flat land and hear nothing was astonishing.  There was no mountain wind noise, just chill.  Then, the drones of insects began to sing and birds chirped.  There was life in the desert.  I soaked it all in.  I began to walk back toward the gravel path and two small chipmunk size animals ran from under the walkway into the brush.  Too quick, I couldn’t snap a picture.
I then continued my jog and passed numerous white signs with nothing written on them, hmm?  I then walked onto the next boardwalk: 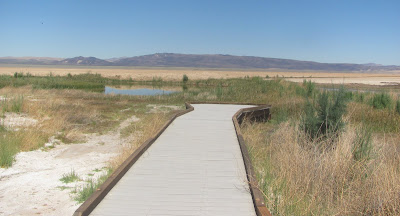 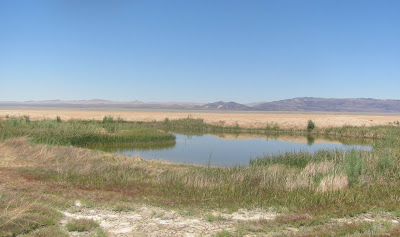 The Dry Lake is Alive!
Water!!  Really??  Amazing.  Birds were flying around here and another Jackrabbit!  He didn't give me much time to focus my camera: 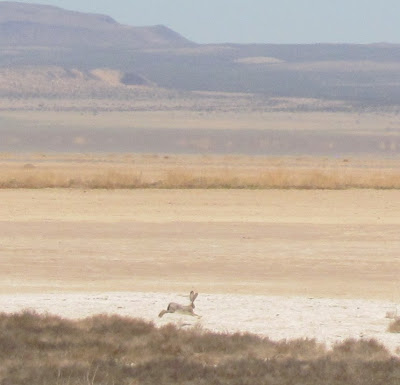 Jackrabbit in full stride
This guy was twice the size of a normal rabbit that you always see when you are hiking in Ventura County.  His ears flopped down nearly to the ground.  The most amazing part was how fast he was.  He leaped out of the wet area and sprinted across the dry lake until he was out of sight.  He began to hop with the same bouncing action as a bunny but then at top speed, his front legs became more relevant.  I’ll compare it to a horse galloping off stride in a harness race and then gaining stride to a fast pace.  Amazing!
I then ran all the way around and back to the third platform.  I saw yet another jackrabbit, more birds and then the horn honked; gotta get back to the wife and kids.  My wife saw a roadrunner while I was hiking.  The wildlife was abundant and not disappointing.  Well worth the 10 minute drive down the road.
History
Until the early 20th century, Harper Lake contained water and a natural marsh which supported wildlife.  This area was a natural oasis in the middle of the desert until developing farms depleted it.  Still, an alfalfa farm operated until the 1990’s but when that closed down, the remaining waters completed vanished.  More recently, the largest solar power plant in the entire world was built just west of the lake.  The Harper Lake Solar Electric Generating Station generates up to 160 megawatts.  It’s part of three separately owned sites that produce up to 354 megawatts of electricity.  Part of their agreement in operating was to deliver water to help restore the habitat.  However, concerns arose due to the nearby Edwards Air Force base that flybys would strike birds.  For that reason, the project of delivering water has been halted.
On March 25, 2009 a pilot of an F-22 died in a crash on the dry lakebed.
For more information, check out these links:
http://ludb.clui.org/ex/i/CA4986/
http://en.wikipedia.org/wiki/Harper_Lake 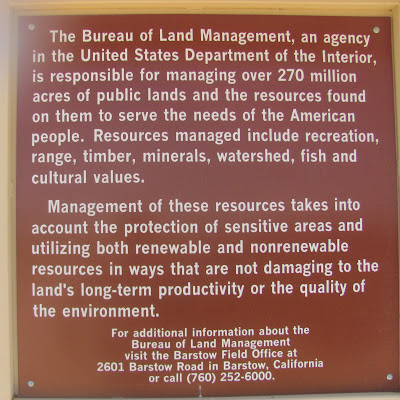 **Total miles hiked on Day 245, including A.M. Vegas Strip hiking and a 5th buffet at MGM = 3.5 miles Elevation gain +100 feet.
Day 244: Saturday July 16, 2011
Freemont Street - Las Vegas
2.5 miles  +50 feet
Saturday morning began with our 4th buffet and then we hit up the wave pool and lazy river at Mandalay Bay.  In the afternoon, we wasted some time at a timeshare but then we enjoyed the reward by watching the Lion King.  Finally, the hike began at night.  We basically covered the entire strip earlier in the week so Freemont Street at night was our destination.  The light show above was amazing and the street entertainment did not disappoint.
We were supposed to fly home at 11pm, but because Spirit Airlines did us wrong, we drove to the Motel 6 for a cheap final night.  Let me tell you, yuck!  Horrible idea, tiny camping style pillow with a small uncomfortable bed.  Our van would have been more comfortable...

Posted by Jeremy Jacobus at 9:35 PM