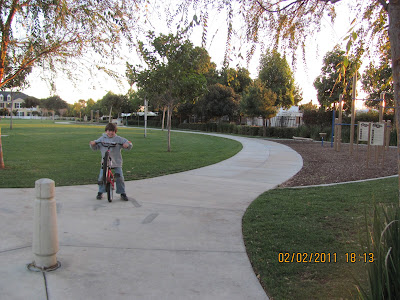 The idea is to go outside each day and conquer a new place.  No better way to do that then by taking your son to the park.  As you can see from the picture above, Thille Park not only paves a quarter mile cement path, but it has several stations along its way for a full body workout.  Ayden and I each did one pull up and several dips :)

After going around the circle several times, it was time to push Ayden on the swing.  Sure, I would have loved playing basketball with the guys out there, but playing with my son is priceless; Really!  Two of his friends showed up with Jessi, my wife and two other random girls were there as well.  We all ended up playing the game, "your it!"  --I haven't played Tag in years!  I couldn't stop laughing while I was running.  These little girls were relentless!  They were in pursuit of me and would not let up.  I felt like I was going to have a heart attack because I am not used to sprinting and rounding turns that fast!  Our game stretched between the two playgrounds there!  In one instance, I ran so hard that my legs went one way and my body hit the wood chips.  The only injury I suffered was the nasty splinter that became stuck under my wrist.  It's out now, no big deal. 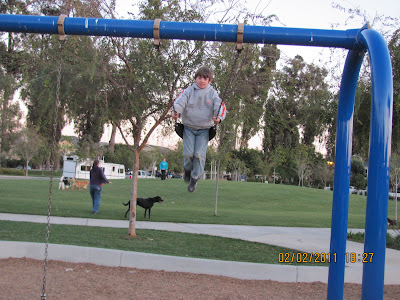 Although many of my hikes are solo, Ayden has found his way on about 1/3rd of all my hikes.  He's excited and told me last night that he will be going with me this coming Saturday, Sunday, Monday and Friday.  I'm planning my schedule accordingly!  I would not miss this voluntary effort that my son is giving me to spend time with.  To be continued...
Posted by Jeremy Jacobus at 2:10 PM