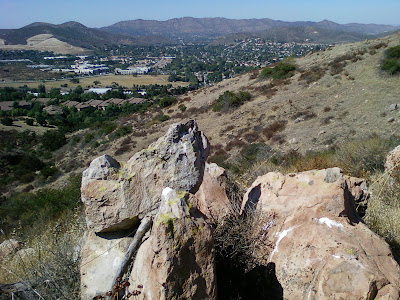 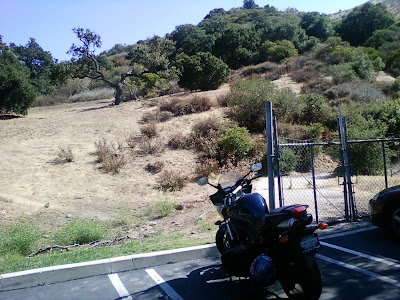 Look what I found; A Trail!
Directions:
From the 101 Freeway in Agoura Hills, exit on Lindero Canyon and head south for a moment.  Turn left on Agoura.  Less than a half mile down, turn right into the Archstone Apartments.  Go up the drive past the speed bumps and park all the way in the back.

Random find, just looking for a trail.  Actually, I had meant to hike a section off Agoura Road further down by Reyes Adobe.  According to Google Maps, it appeared as if there was an old dirt road that led way out into nowhere.  Problem was, when I passed it, there was a fence, construction vehicles and No Trespassing signs!  I guess I was a year too late on this trail.  So, I ventured further down and took my chance at the apartment complex.  Hey, what do you know; a somewhat legit trail! 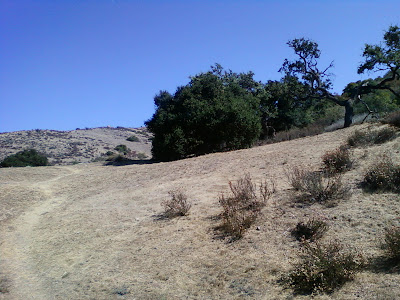 There was an old paved road that began to the right so I started to climb that.  Immediately, the road was gone and soon there after, it led into the thick...  My initial idea was to hike into it this way and then return through the open; but guess not.  I walked back to the trail and started again.  Up and into the open field following the worn path, I pass the tree in the picture above and noticed squirrels playing.  As they saw me pass, they quickly jumped off the tree and into a hole in the ground.  It's funny because back in Cleveland, squirrels usually climb trees to hide, out here they act like gofers. 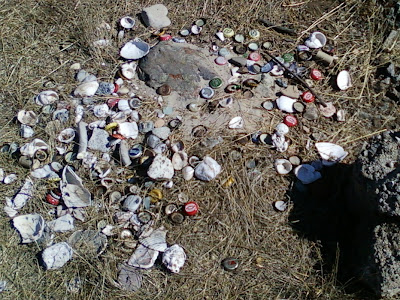 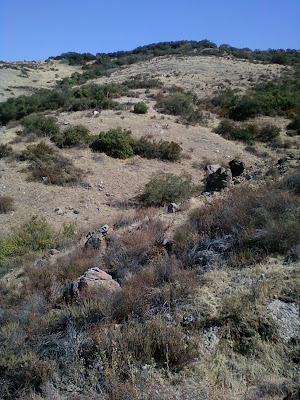 Climbing to the top!
There were many small footpaths that began and then just disappeared.  These are probably small animal paths and when they ducked down into the thick, I had to forget about it.  I kind of made my own switchback trail to the top.  At first I thought that I was going all the way over to the left, but then it appeared that I was climbing the highest peak to the right.  The hot sun was shinning 90 degrees plus on the steep hill, but the footing was pretty good.  Once I reached the top, I realized it wasn't the top at all.  To be expected, a dip down and then more massive mountains beyond.  An opening to the right revealed: 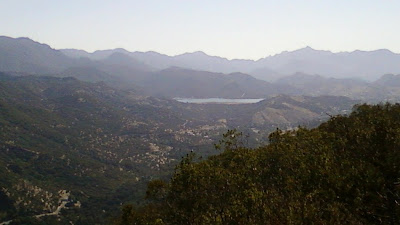 Las Virgenes Reservoir in the distance
There appeared to be a halfway decent way to go in that direction and possible different way back if I chose to do it.  However, I wanted to keep going higher.  I pushed up and back and quickly found no trail at all.  Rather than turning back, I took some chances by going down and up into thickness.  I pushed past some of it and rejoined another bunny route. 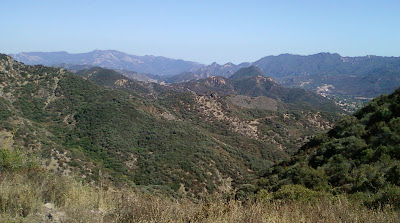 Ok, I'm nearly out of water with nowhere to go.  I kept going left until it was impossible.  I made many trips down only to get stuck and then climb back up.  I felt like Cartman from South Park and I wanted to "wah".  Eventually, I just gave up and pushed down and through the thickest of thicks.  I had no shirt on and trust me when I say, it hurt.  Branches sliced open my upper torso.  My legs were all bloody too.  Things did not get any better.  I was still very far out: 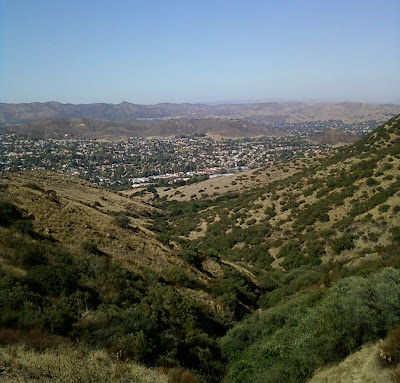 My only choice from here was to drop into the ravine and sacrifice my entire body.  It took me more than an hour but eventually I made it to the street.  I was completely dehydrated and cut up.  Once at my bike, I immediately jumped on and raced to the nearest gas station.  I downed some Vitamin Water and sat on the grass near the 5th tee at the golf course right next door.  I decided that my socks were destroyed and I spent the next 20 minutes emptying my shoes from debris.  --Quite possibly, this was my worst hike to date.  The crazy thing is, I will likely return to the area but next time I will hike towards the reservoir. 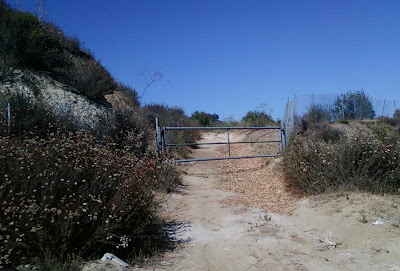 Trailhead
I found this trail a few weeks bike when I was jogging the streets near Quilto Park in Camarillo.  Directions: From the 101 Freeway exit on Santa Rosa and turn left on Morrongo (a few miles down).  Weave your way up the hill to the deadend intersection of Dia and Los Coyotes. 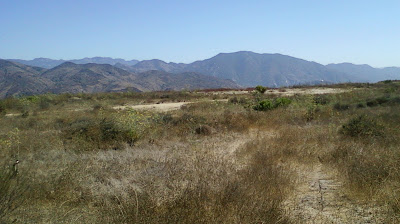 I jogged for the first 15 minutes.  Up the hill, to the right, reached the fence line and then crossed the open field to the left of the trailhead. 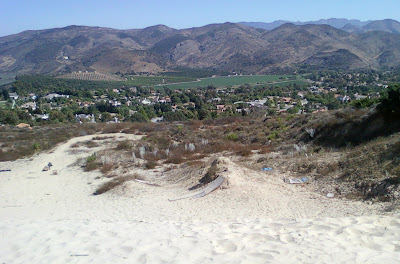 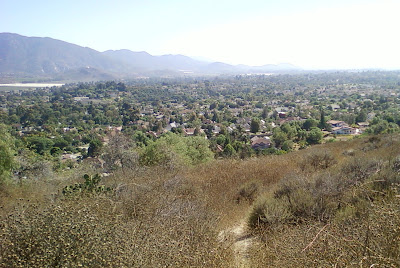 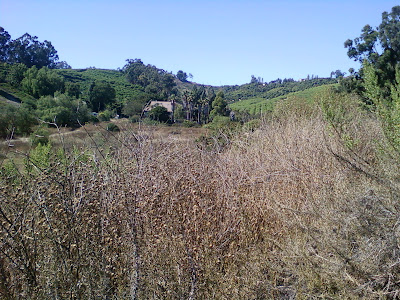 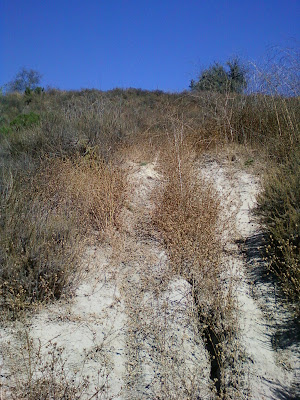 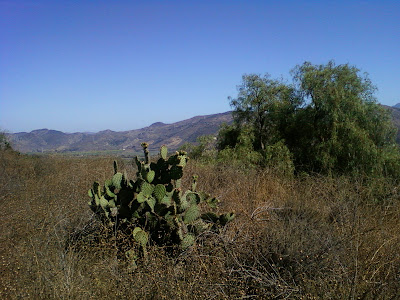 The dead thistles were still sharp, my legs paid the price 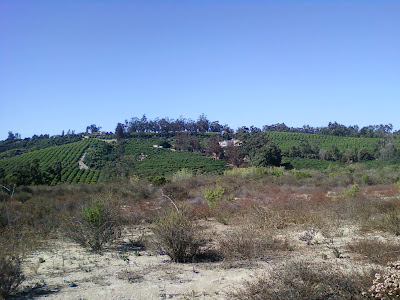 nice backdrop
***This is not a recommended trail.  When I tried to extend it to reach somewhere else, I paid the price through the scratchy dead thistles.  Little did I know at the time that this day would be a breeze compared to what was ahead tomorrow...
Day 262: Wednesday August 3, 2011
Ventura County Fair
Distance: 6.0 miles +100 feet
Time: All Evening 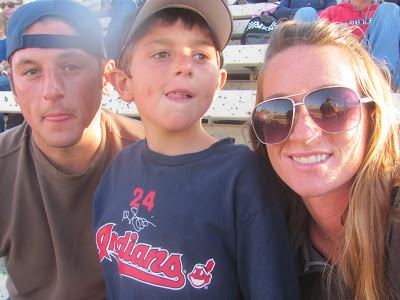 What's up with our tongues?
Rather than to wait in traffic and pay $10 for parking, we parked our car off the Avenue.  Maybe not the safest place to park, but the 1.5 mile walk created a hike.  We walked to the ocean and into the fairgrounds.  The highlight of the VTA County Fair opening night were the races: 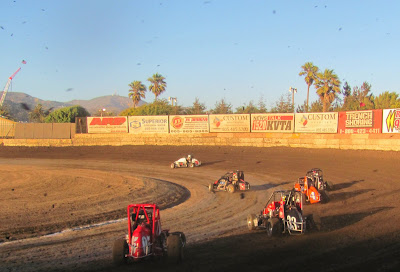 Dirt Clumps flying
We sat in the "wet zone" and let me tell you, I still have dirt clumps on me.  The large mud clumps flying at you surely stings on impact but the fine dirt floating waters your eyes.  Cool experience. 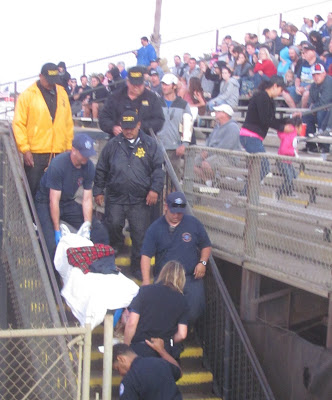 Tragedy in the stands
Prior to this event, a girl was walking down the bleachers rather than the stairs and fell badly.  Amazingly, her full beer cup did not tilt but her ankle snapped.  Walking on bleachers is dangerous, especially over the muddy while intoxicated.
The girl in the other section as seen in the section above did not fair as well.  She was in real bad shape and they were supporting her neck.  You know, it sucks paying $10 for a beer, but when you have too many; your $50+ investment can only end horribly.  Hmm, likely the reason I dropped the foul ball last week at the ball park!  --Being sober is better!!!
Day 260: Monday August 1, 2011
Mondos Beach to Emma Wood and Back
Distance: 3.5 miles +25 feet
Time: 2 hours

After work today was another day at the beach.  Living up the great weather after dive practice, my son was eager to hit the waves again.  We returned to the same spot from over the weekend but today, instead of jogging along the sand to the North, and paced to the south.  All the way across the riptides off the water to Emma Wood and back.  When I returned, the weather had turned colder and my son was ready for dinner.  Of course, the wife was there with him: I didn't leave him alone!  However, I missed out on my third surfing session.  Oh well, at least I got a good jog in.
Posted by Jeremy Jacobus at 9:12 AM