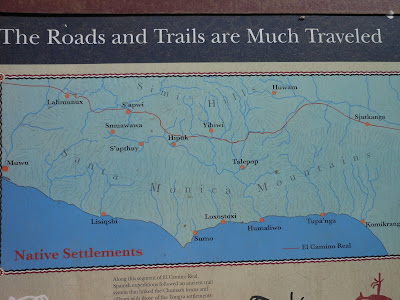 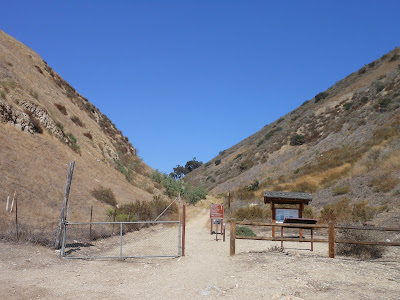 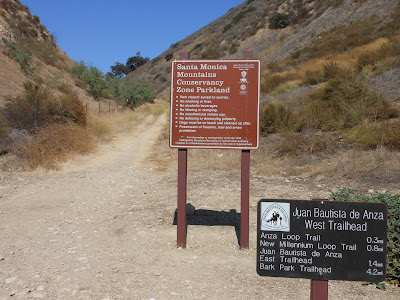 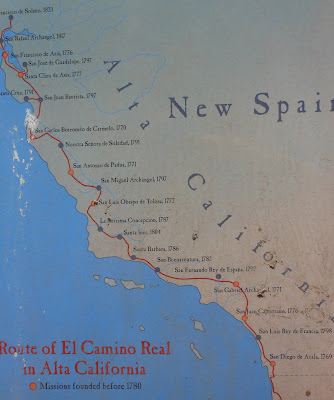 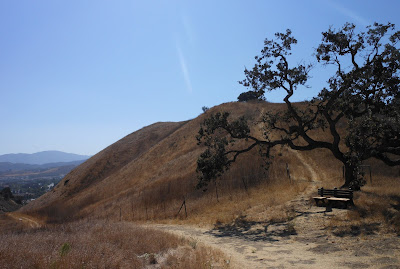 Looking Back
You begin this trail by heading up a short hill.  With hot temperatures, the mild climb seemed anything but.  For the recreational tourist, this park bench may be a welcoming delight.  There is a single track trail that lifts higher to the left, but I continued straight on the main trail today.  Shortly there after, you will encounter another single track trail to the right.  This one also leads higher and is marked with a trail sign.  The Bark Park Trailhead is said to be 3.9 miles up and over the hill.  I am in no mood for an 8 mile rounder so I will save this adventure for another day.  Instead, I continued straight down the wider trail... 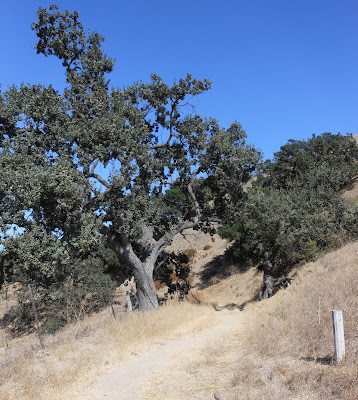 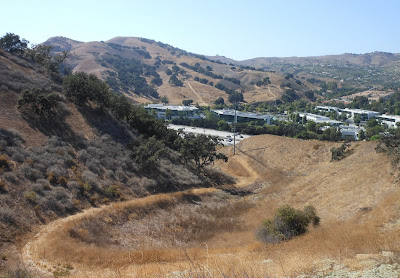 Up the hill and look left, we'll loop this later... 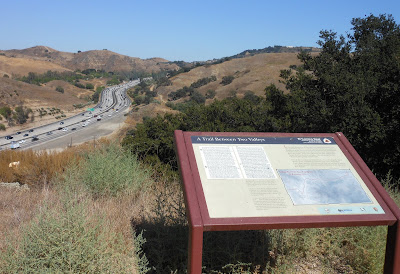 Always nice to hike and learn; glad I took the bike today to beat the traffic 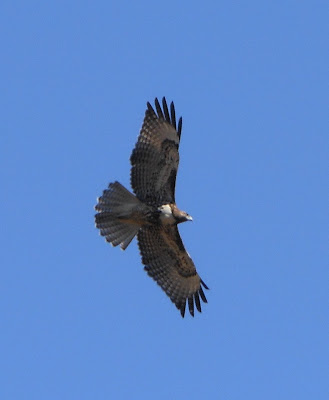 I was all alone and being watched 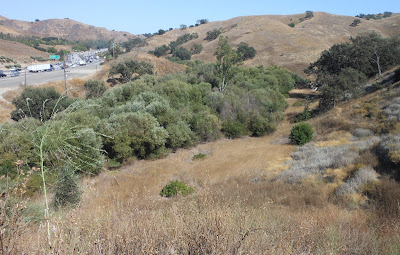 The trail offers you a chance to switchback left -denied!  A bit further up, there was another possible turn left - denied.  Someone bushwhacked a trail through the overgrown and it met back up with the notso main trail.  It didn't appear too many people came this way.  With no shirt on, I was getting all scratched up; again... 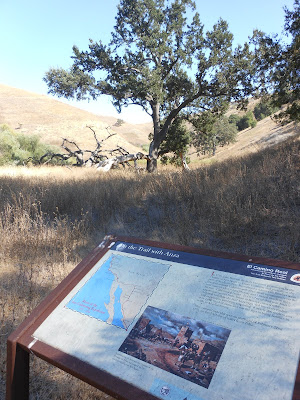 Reassurance, more reading, but where to go now?
Look forward into the woods: 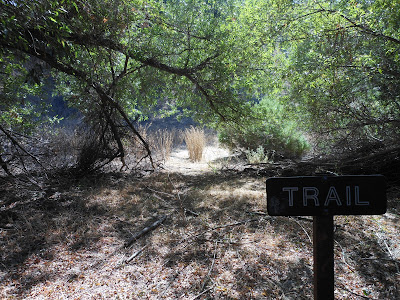 From the opening, you see the back of the wooden sign.
Well, I began to push through the woods... 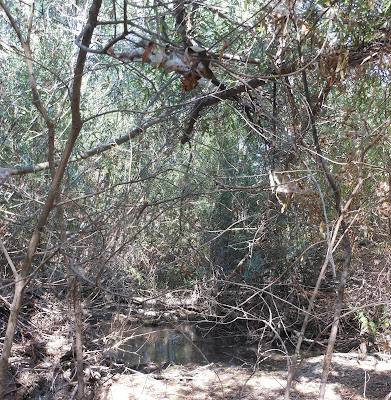 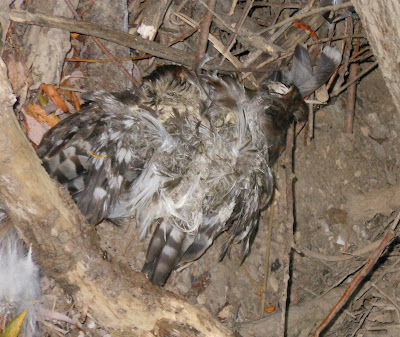 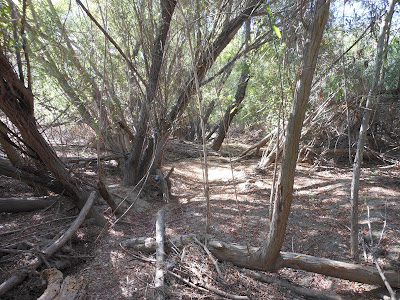 I followed a Hansel & Gretel path of water bottles and trash.  There litter was not out of control, just enough to be a welcoming sign that I was heading the right way.  Eventually, the notso trail lead to an opening and then I pushed through tall dead overgrown sharp, scratchy brush and gave up.  There was no good way to go so I decided to turn back.  When I reached the point of cutting back up into the brush, I elected to stay on the somewhat cleared overgrown trail that looped back around.  I continued back to this point: 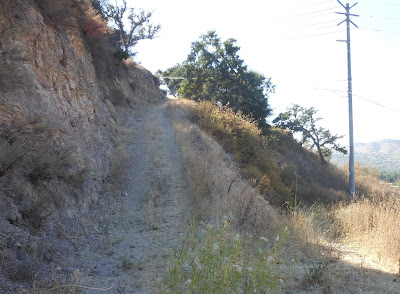 ...Rather than heading back up from where I originally came from, I turned right down the remnants of an old trail  I knew this would open up more from the picture I took earlier.  And, it did, for a moment.  Then as I came closer to the freeway, the trail became sketchy again.  Nevertheless, I pushed and scratched past it, paralleled the 101, cut between a billboard and a fence, rounded the on ramp from Las Virgenes and finally ended up at the back end of the parking lot.  --I wouldn't recommend going this way back.  Nothing to see and not worth it.  In fact, the entire hike was a bore, with exception of the pictured readings.  However, the area did intrigue me as I will have to return to check out Bark Park... ***(Taking a day off from running to rest for a 10 mile run on Saturday)
Day 291: Thursday September 1, 2011
Hiking the Tracks &
2.5 Mile Stroller Run 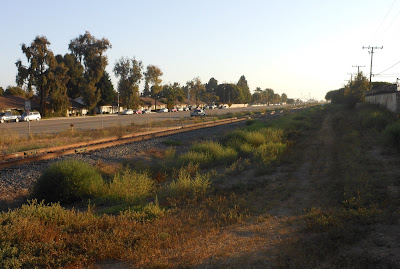 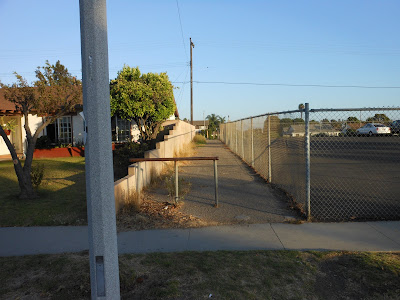 Across the street from Junipero Serra Park on Neath Road
On day 227, I visited Junipero Serra Park, hiked around the block and when I was done, I noticed this pathway pictured above.  Well, today, I parked on Neath Road and discovered that it lead to the train tracks.  There is a dirt trail that parallels the tracks so I jogged on that to Montgomery and back.  I tried going the other way for a while but the footing was not so good.
Later that evening, the wife and I did a stroller run at Kimball Park.  She was watching a 2-year-old until the late evening hours so we took turns pushing and jogging the 2.5 mile course.We ran the first mile in 10.40.13 and completed the course in 24.13.80.  My final quarter split time was 1.44.27.  This is about 2 minutes slower than what I ran it in the other day.  Horrible!  Of course, I wasn't pushing a baby then.  The half marathon is just 2 weeks away.  When I ran my marathon a year and a half ago, I was able to maintain an 8-9 minute mile pace for the first 13 miles.  Now, I can barely hold a 10 minute pace for 2 miles---

Posted by Jeremy Jacobus at 9:02 AM