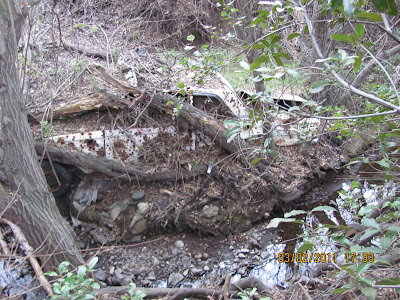 I'm curious; does anyone have any knowledge or information about this car?  I felt like I was in the TV Series LOST discovering the airplane in the trees. 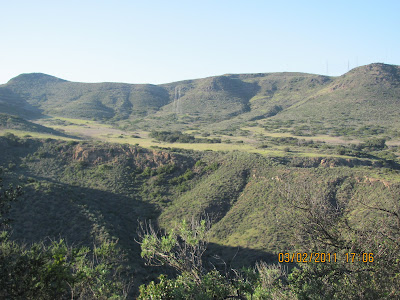 Welcome back to the Rancho Conejo Open Space
Today I parked in the same spot but began hiking forward in a West Northwestern direction.  I followed the road across the field for about a quarter mile and then it took a sudden drop.  I wasn't sure if I should attempt it, but of course I did!  I slid on my butt and took it real slow: 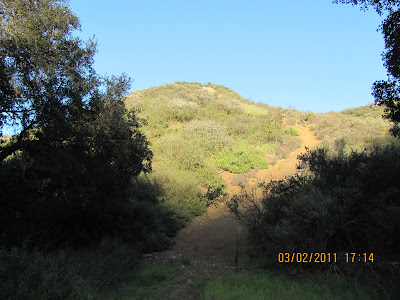 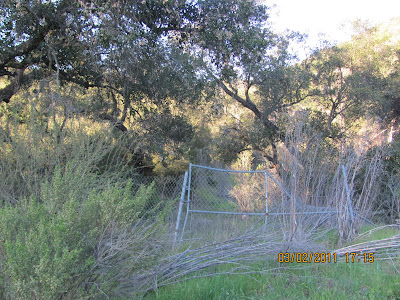 The Main Entrance into the Arroyo Conejo
Of course at the time I passed this fence, I had no clue.  At the bottom of the big hill I intersected a road.  I turned right because it kept going lower.  This fence was nearly immediately on the right, but I kept going.  There was another insane incline trail off to the left, but I left it alone.  I kept walking forward but then took the next left,  This trail also went up hill but so did the trail that I was walking on so I guess I had to go up.  This spur was a bit of a strain and after a quick 75 foot incline, it intersected with another road.  To the left it continued to go higher but to the right it went lower, so I turned right.  The trail began to make a large turn and then I realized that this was the same road that I was just on. Rather than retrace my footsteps, I ventured off to the left.  It kinda looked like a trail until it became thick of sticks.  Nevertheless, I cracked each branch and negotiated my way lower.  I saw the crevice below and knew it had to be the creek.  My goal today was to hike the creek to meet up with where I ended on Day 26.  So, I finally reached the creek and to my surprise, there was a trail??  I knew that I had to go left but I wanted to see where this trail came from so I turned right.  Ah, the fence, it all makes sense now :)

The trail was slightly overgrown and not heavily traveled.  I did not see any evidence of human.  No footprints, no litter!  The Creek began from nowhere and was very shallow.  It trickled slowly down in the direction that I was headed. 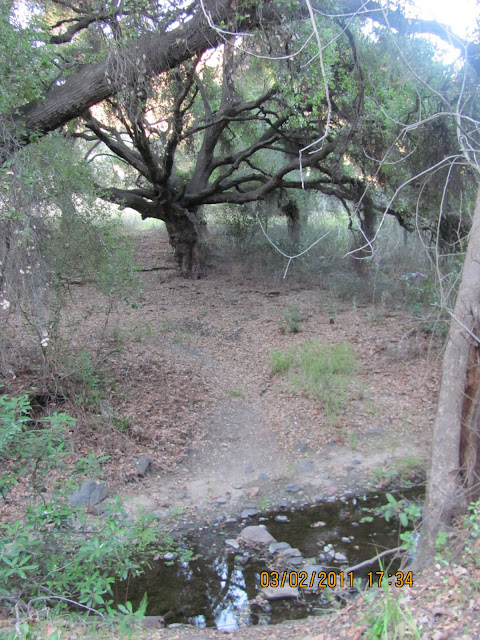 The creek became wider at spots and the area was absolutely beautiful!  I really was hiking with confidence and a smile.  I passed an abandoned car, as seen in the first picture attached to this post.  How in the world did it find its way down here?  I suppose 20+ years ago the landscape was different and somebody went yee-hawing!  It was in a precarious spot  so I didn't drop down into the creek to check for life...
About 20 minutes later, I lost the trail?  Maybe it just didn't exist so I had to zigzag across the marshy grass.  The forest area was no longer and neither was the creek?  --I learned from Ian that the creek flows underground in many areas.  This explains the vegetation and moist ecosystem without the actual visible water.  I hiked the heart of the Arroyo Conejo with Ian on Day 8 http://calihike.blogspot.com/2010/11/day-8-la-barranca.html 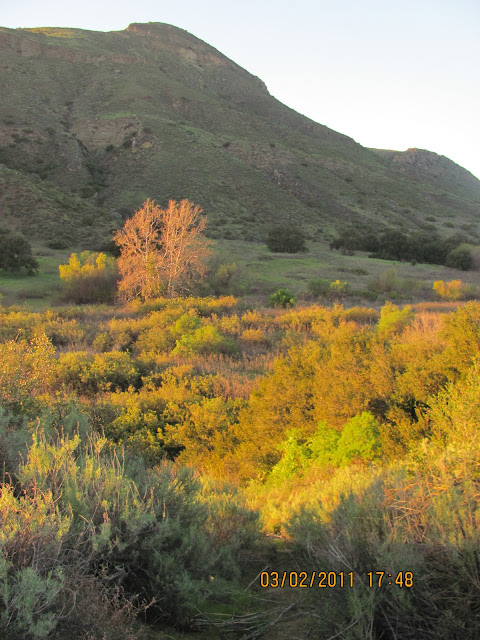 I eventually stepped thru the scratchy unknown and found a narrow dirt trail to the right.  My advice, if you are going to come thru here, stay to the right of the creek if you can.  Even though the creek is not visible in places, there are still crevices formed that would attract water if it rained.  I hiked up the dirt trail because hiking thru any more of this nonsense is just nonsense.  I was lucky to find this trail because it then intersected a wider trail that climbed up the hill and then back down into the marsh.  Hmm, maybe this was the side trail that I was determined to one day make as an alternative to the road that I hiked on Day 26.  So, I turned right and began climbing up.  Off to my left was the road so I knew this trail would work its way up this side of the canyon before joining up with the road.  --Another decision, I saw a mild fork that went off to the left.  This surely would be the trail to meet the road but I decided to keep straight and up.  The trail I was on was more defining versus the animal trail alternative.


A few minutes later, I reached the top.  Confirmed, the trail to the left did meet the road.  I saw it with my own eyes.  The trail I was on met the dirt road at the top.  On Day 26, I was looking all over for a way to get down this steep drop but never found it!  **All this writing is going to turn into a visual map.  All this guessing is unnecessary.  If there was only a map now, my planning would be so much easier.  But you know what, I'm glad it wasn't mapped.  This is my turn to be John Smith!  My focus is to hike this entire area.  I'm sketching the map now and I'm trying to obtain as much elevation info as possible to complete it with accuracy.  Once it's completed, I'll take a photo of it and link it to the blog. --I know that there has got to be a better way to do this but I am uneducated and working with no budget.  At least I'm posting something that makes sense, right?
Posted by Jeremy Jacobus at 2:20 PM