DAY 97: STRAWBERRY FIELDS FOREVER
Date: Saturday February 19, 2011
Miles: 2.5
Elevation Gain: 75 Feet
Time: 1 Hour
Difficulty: It was a downpour!
Reward: The Santa Clara was flowing and the Lemons were in season!
Description: Bypassing the overflowing river, I found a homeless shelter and strawberry fields forever!
Where: Ventura, CA
Directions:From the 101 Freeway in Ventura, exit on Johnson and drive north.  Turn right on Bristol.  Bristol will turn into Northbank, keep going straight.  After Petit, turn right on Red Rock and then make an immediate right on the first street.  Follow that around to the left.  You'll be on Salt River Ave.  Park anywhere, the cement path will be on your right. 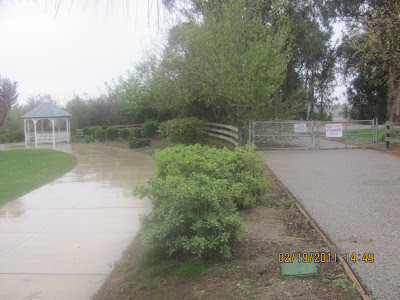 The camera works, sort of.  So what better way to introduce it back to it's domain but to expose it to a heavy downpour!  In my pursuit to hike the entire Santa Clara River, I rounded the turn and gazebo on Day 91: The Dark Tunnel.  With the heavy rain, I was interested in seeing how the river would react. 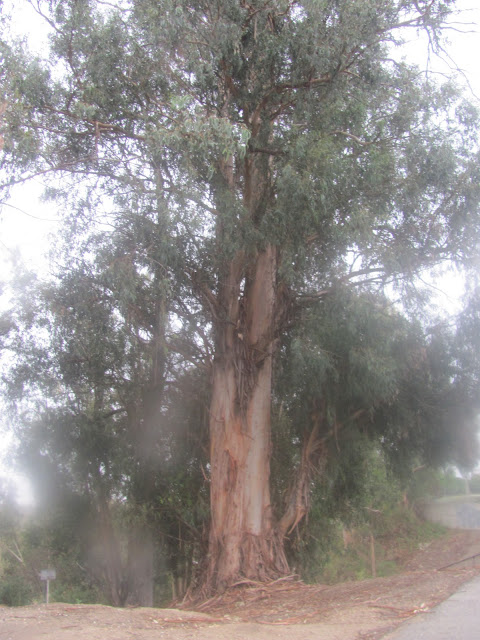 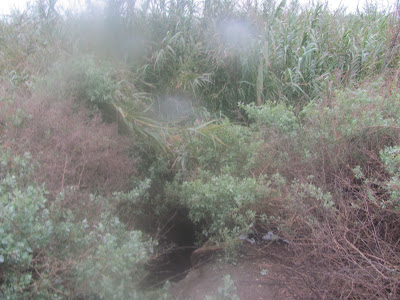 I had wanted to reenter the riverbed exactly where I left off last time, but the river was full and impassible.  Off to the right beyond the tree in the above picture was a short single track trail.  After 20 feet, I thought it was over but then I took a better look at this hole.  Someone had chopped their way into the thick.  It was a muddy ten foot slide down: 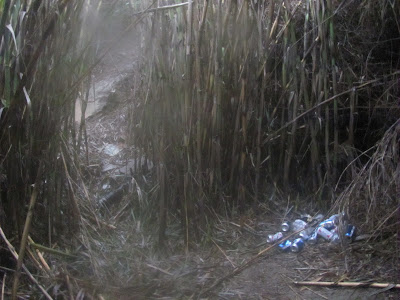 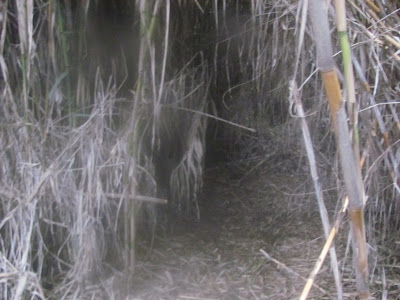 I was completely dry in here.  There was a tent and several bushwhacked trails.  A perfect find for a rainy day.  But it didn't last long.  The maze system came to an end: 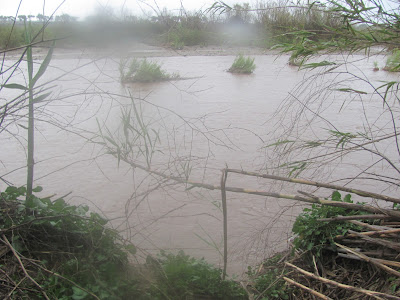 
Normally you can walk right along the riverbed, but not today.  I reached the end so I turned back.  I could have called it a day but, why would I do that.  The real journey began!  I walked across the walking bridge next to my car and rounded back toward the river.  Once again, no place to hike below but: 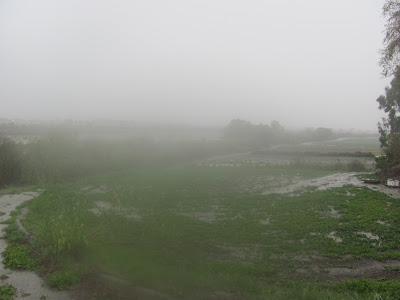 Strawberry Fields Forever
There was a gate and road that lowered to the right.  This took me to the fields above.  Strawberry fields, forever.  It was a mushy sloppy one mile stretch.  Waterways had created and a waterfall formed and dropped into the marsh below.  I did take more pictures but my camera was unable to hold off the rain.  There was even the occasional thunder echo.  I hiked to the end of the strawberry field and then a major water flow separated this field from the lemon groves.  At the top however, they merged and I picked one ripe lemon for the road.
I was at the intersection of Montgomery and Northbank.  Last night, my left foot was swollen to twice it's normal size.  I am still feeling some of the effects of the poison oak and for some reason, blood was not circulating to my foot properly.  Earlier in the week, my thighs and knees were swollen.  I couldn't kneel down because it felt like blood was going to burst in my knees.  The system worked itself to my foot and I was honestly scared that I could lose my foot.  I tried to keep it moving but the tingles would not go away.  My foot was so big, I could not ware my shoe.  At work, I was walking around in socks.
This morning, it was much better.  However, there was a sharp point of my old boots cutting into my big toe.  I tried walking, even jogging on the pavement with my toes curled, but that was ridiculous.  I decided to soak my sock and walk without a left boot.  That lead to an immediate blister forming on the bottom of my foot.  I finalized the hike by wearing my boot like a high heel.  I finally got back to the car soaking wet for the second day in a row.  Day 97 Complete!
Today's mission was simple; connect the dots from DAY 89: INTRO TO THE ARROYO to my failed D

Posted by Jeremy Jacobus at 7:27 PM