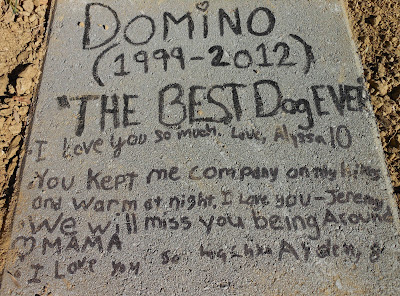 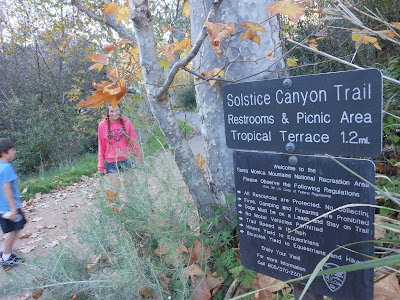 Trailhead
Directions:
From the PCH in Malibu between Kanan and Malibu Canyon Road, turn up Corral Canyon Road (there is a traffic light).  The parking lot is around the first bend in the road.  If you follow the narrow road for about a quarter mile, you may be able to park closer but for us, the lot was full.  There are a couple different trails to choose from but if you just walk straight beyond the lot and bathrooms, you'll find your way as we did... 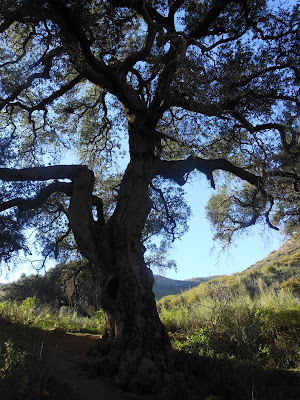 It was a beautiful first day of the year 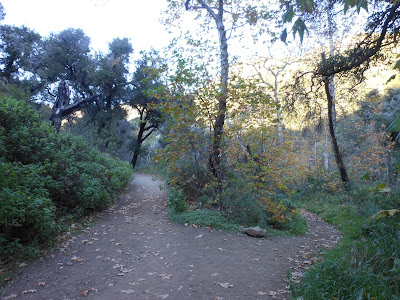 You meet a fork in the road, you can go either way 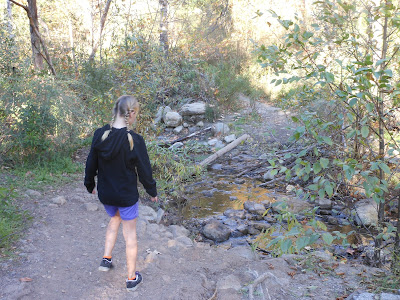 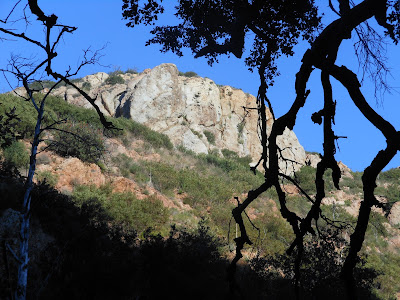 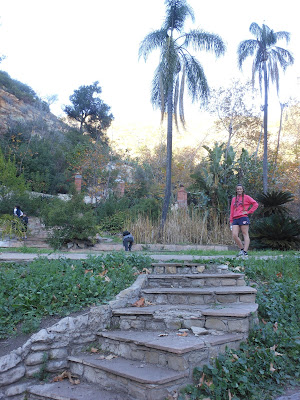 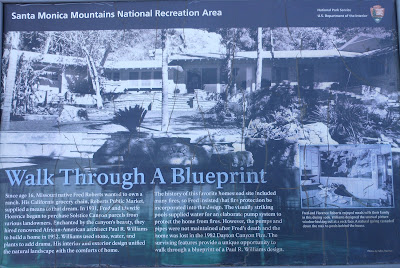 Ironic how a fireproof house burns down 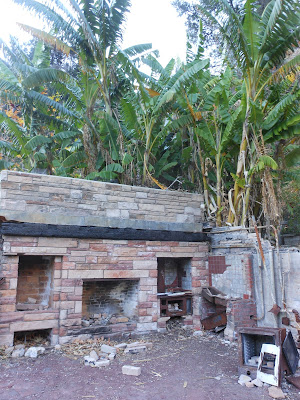 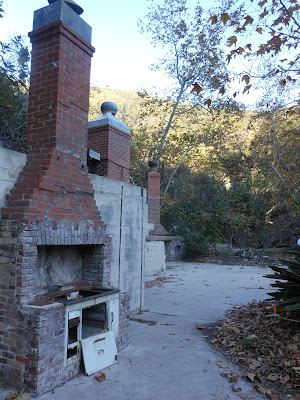 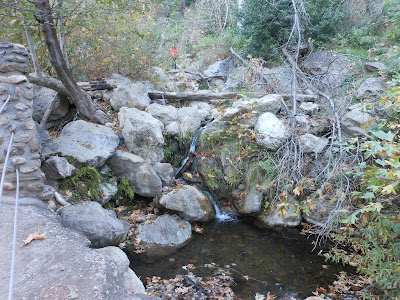 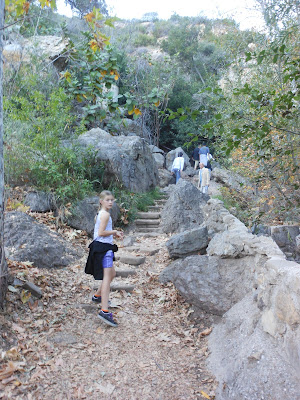 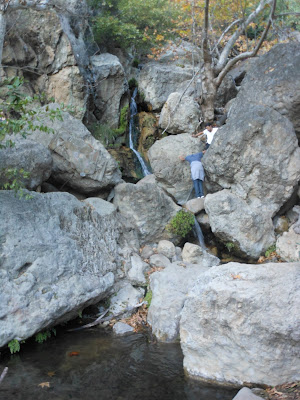 Bigger waterfall (the back yard) 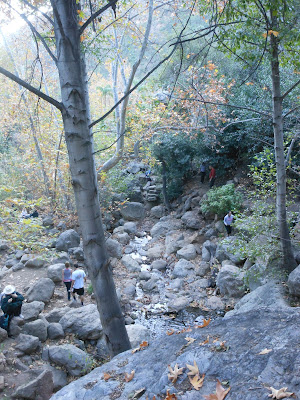 Many people were back here scrambling up the rocks, higher and higher, out of site.  My wife and I decided that this would not be a viable activity with young kids, and out of shape parents :).  Just before the terrace, there is a legit trail, the Sostomo Trail which leads up and around the creek.  This then leads to the Dear Valley Loop Trail.  I reckon that I will need to come back here and try those next.  We could have looped back to the car by hiking the Rising Sun Trail, but Ayden had to go to the bathroom (number 2).  Poor kid locked himself in the bathroom and it took him a good 20 minutes to figure out how to get out.  Boy was he crying... 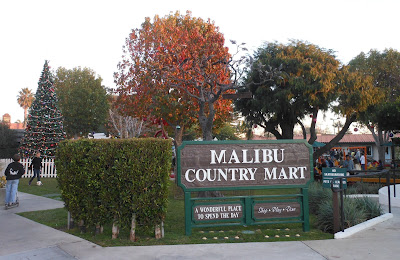 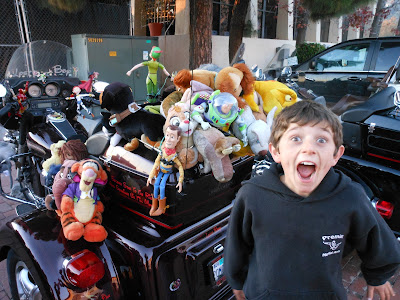 Instead of going home, we continued down PCH to the Malibu Country Mart.  Today, I did not consider this a hike.  We basically hung out in just the park area but many months ago, we hiked beyond the shopping along a hiking trail which leads to a large pond.  If you're interested, search my blog and you'll find it...


**It's early evening and we needed to get back to feed the dogs.  By the way, January 1st represents Sammi's third Birthday.  Happy B-Day girl.  We stopped at Vons and bought a frozen pizza and the fixings to make chocolate covered strawberries.  As normal, we rolled into the garage and Domino was patiently waiting on her mat for dinner.  Despite a small argument that I had with my wife about something irrelevant, I opened up the door to the van and greeted Domino with my cheery "good girl" tone.

Domi had been doing better since her tail injury.  We were at the vet just the day before and they said her tail was healing nice but they were concerned about her weight loss (3 pounds in under a week).  Out of the van, I walk over to Domino like I always do and discovered a site that I will never forget.  First, her bandage was off.  This was the third time since the injury that she chewed off the bandage.  Even with the lamp shade on her head, she stretched her neck around to unwrap it.  But, it was more than that.  She was sitting in a pool of blood, again.  But the most gruesome part was, her tail was shorter.  I knew immediately what had happened.  She bit the end of her tail off.  At that moment, I saw her life flash before my eyes.  This was irreversible.  The worst part about this was, she must have just done it.  There was no trail of blood outside and by the looks of it, it couldn't have been like this for more than 20 minutes.  I felt so guilty.  Why did we go to the Country Mart?  Or if we didn't go to Vons, drove faster or Aydens poop...

Before rushing her to the ER, I wrapped her tail with gauze and fed her left over human food; stuffing, casserole and corn.  We were all in tears.  This would be her last meal.  At the vet, we had the option to amputate her tail or euthanize her.  It wasn't an easy decision but based on everything, we chose the latter option.  She enjoyed some chocolate and other snacks before it was time, but then the time had come.  I did not let go of her and told her that it would be okay.  I reassured her....   ...  I can't write this ... it's too hard.  At 11:00 on New Years Day, Sammi's birthday, My companion of 12 1/2 years took her last breath.  Her heart was beating strong to the end and in my arms, it stopped...

It's been really hard for me.  I've gone to work all week but mostly, I was just reflecting and writing.  Along with this blog, I've been writing a book about Domino.  I call it, Domino Diaries.  I began writing this before I began my 1000 hikes adventure.  I never did know how it was going to end, I still don't.  I took a quite unique approach at writting this and I do hope one day I will get to share it. 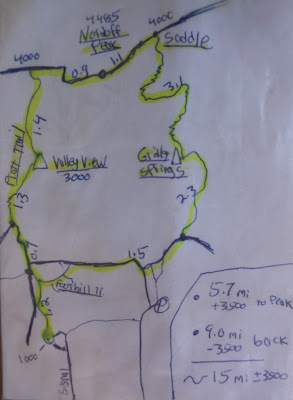 I found this map in the garage.  This is the route Domi and I hiked a few years ago and it's significant because it was her last long trek.  I retired her after this one because of what happened.  I believe I wrote about this when Ayden and I climbed Nordoff Peak.  We duplicated the Gridley Trail where I had to leave Domino because her pads were completely worn.  I did rescue her by walking back up with an off road baby stroller.  I must have hiked about 25 total miles that day, my longest ever one day excursion. 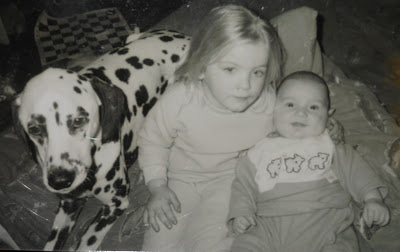 Picture taken over 8 years ago, just after Ayden was born 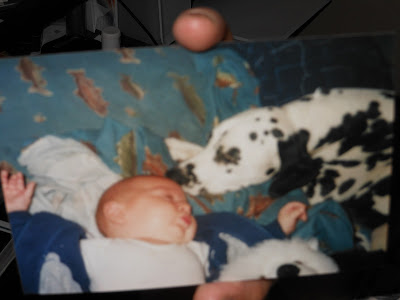 I took a picture of these printed pics 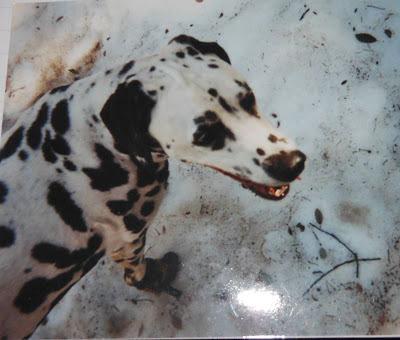 Domino in the snow wearing booties
This was the first and last time Domi wore doggy shoes.  We were hiking the Reyes Trail, before my 1000 hikes.  These boots stayed on her feet for a few miles but she acted retarded with them.  It was like her leg was broken or something, she couldn't stand them.  We hiked 16 miles that day.  Domi was a trooper and I miss her so much.  --It's 1:00am, Thursday night.  I'm calling off sick tomorrow and will be going on a solid hike for Domi.  I'll be hiking Piedra Blanca.  I've only done it once and I didn't quite complete the trip then.  This trail is symbolic because it's the first ever long hike that I did alone, without Domino.  Good Night Domi, I love you for always...  :(
Posted by Jeremy Jacobus at 1:03 AM