Saturday morning I picked up Ian and we drove out to Lone Pine.  We stopped by the visitor center to secure our Whitney Day Permits and we came up one overnight Permit as well.  Nick and Adam would be joining us later that day so our hope was to obtain 4 overnight permits for Sunday night.  More on this later...

After the visitor center, we grabbed a bite to eat at the Mt. Whitney Cafe.  I ate here last year with my parents and it only seems fitting to eat here again ahead of the Mt. Whitney trek.  My burger was bomb, loved it.  I think I ordered the Alabama Hills Burger loaded with mushrooms!

Speaking of Alabama Hills, it's impossible to miss these rock formations when heading up to Whitney.  The picture above was taken on the corner of Whitney Portal Road and Horseshoe Meadows Road.  For more on the Alabama Hills, check out my visits from last year: Day 578: Alabama Hills & Day 577: Alabama Hills

Unlike last time, Horseshoe Meadows was completely full.  We actually nabbed the final tent plot/  I believe there are only 24 walk in spots available but by sundown, there must have been at least 40 tents set up around the camping area.  Of those people, not sure how many people actually voluntarily paid the $6.00 overnight fee.

The system up here is so flawed that if one wanted to, they could just easily remove the money from the drop box.  I believe a ranger came by once during our visit to collect the money but they really don't monitor what's going on up here.

Wood gathering is prohibited and you are only suppose to stay one night but I've heard from others that you can stay multiple days and no one really cares.  In regards to the wood, Ian and I bought some at the corner store in Lone Pine so we were legit.

Last year with Ayden we climbed up to Cottonwood Pass.  Rather than strain the legs on a hard push duplicate track, Ian and I wandered out into the meadows.  Originally I wanted to drive back to New Army Pass and trek a mile or so there, but I made the foolish mistake by not filling up my gas tank in Lone Pine.  I noticed the fuel light on about half way up to Horseshoe Meadows.  Rather than turning back, I drove up 10,000 feet figuring I could just coast down the next morning.  Anyhow, with the risk of running out of fuel, we did not drive over to the New Army Pass trailhead.  Instead, we did this...

Okay, I get it now.  Horseshoe Meadows.  This is the same meadow which wraps around like a horseshoe.  I bet this area looks absolutely amazing from a helicopter.  Wait, can they fly this high??

The next three pictures are quite gruesome.  We stumbled upon a dead cow.  We saw ravens picking at it and later found out that two bears had been eating this cow just yesterday.  Okay, ready, scroll below to read the rest of this blogpost... 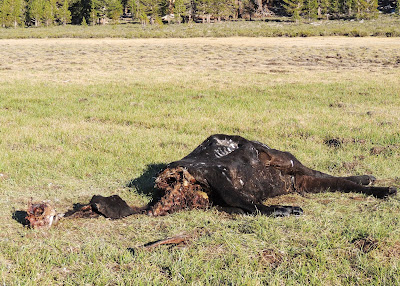 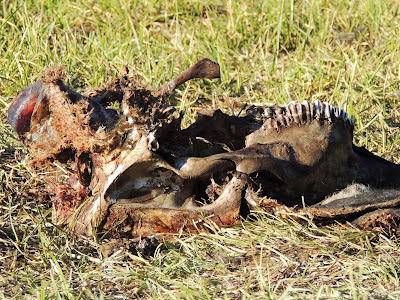 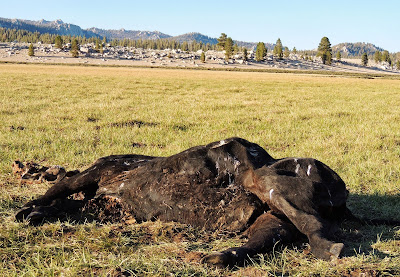 
We got back to camp just before sundown.  The temperature began to drop quickly so we began our fire for light, warmth and dinner.  We spoke to a random guy who climbed Mt. Langley from the Cottonwood Pass Trailhead.  This day hike nearly mirrors the difficulty of Whitney by climbing to 14000 feet and 22 miles round trip.  Being far less popular, the isolation of this trek I'm sure was amazing!

I forgot the guy's name but he told us about the bears eating at the cow yesterday.  Dude, I have still never seen a bear in the wild.  So close, ya know...

While we were talking, it just happened that the wincing crescent moon had set and we were in the middle of one of the largest meteor showers in years.  So lucky!  The Milky Way was Way Awesome.  I've never seen it so clearly before.  The gaseous light of the galaxy scrolled across the middle of the night sky like a mohawk.  The shooting stars lit brilliantly like Mickey Mouse waiving his wand for Disney.

After dinner, we cleaned up in the dark and prepared for bed.  Just then, Nick and Adam wandered into camp.  Right on, so now the four of us were all together and the conquest to Whitney would soon begin.

Ian slept in the hammock and Nick and Adam shared the other tent.  Man, it was cold.  We estimate 29 degrees.  Ice was everywhere and the butter left out was completely frozen to the core.  Ian's feet were numb and I did not sleep very well.  That said, Adam slept like a bear; at least that's what he sounded like.

After breakfast and breaking down the tents, we trekked back to the meadow with the guy to see if by chance the bears were back for the cow.  However, no such luck.

From 10000 Feet back down to 3700 Feet in Lone Pine.  I cruised down the long wide open Horseshoe Meadows Road on fumes.  For being at 10000 feet, this has to be one of the best roads ever to climb to that kind of elevation.  I barely made it into the gas station before stalling out.  I filled up over 19 gallons and all this time I thought I had an 18 gallon tank.

We then went to the Visitor Center in hopes to pick up three more overnight permits.  As it turns out, they hold a second lottery for walk in permits at 11:00 every day.  We made it just in time and I picked #2!  This was great because they called up #'s 1-2-3.  Unfortunately, they did not have any overnight openings!

For the next two hours, we were negotiating with another party who was looking for more day permits.  To make a very very very long story short, we gave her two of our day passes for one of her overnight permits.  The process was anything but simple.  End result, we had two overnight permits and two day hike permits for Mt. Whitney.

We drove over to the Alabama Hills Cafe for lunch to discuss our options.  The place was cramped and busy but I will say, the food was darn good!  In any event, we decided to roll the dice and begin our journey to Mt. Whitney today.

Playing with the probability, we decided to hike to Lone Pine Lake today.  The journey is roughly 2.5 miles and +1700 Feet elevation gain from the portal.  Moreover, it's not technically in the Whitney Zone so you don't need a day permit to hike in this area,  That said, you are still required to hold an overnight permit if you were to camp here.

I read online somewhere that the fine for camping without a permit is $5,000.00.  Well, this is not true.  The fine is somewhere in the neighborhood of $130.  So, the risk is really no big deal from a financial standpoint.  However, if caught, the ranger could turn you around back to the portal.  Man, would that suck!

Posted by Jeremy Jacobus at 9:46 PM