The Oldest Rodeo is in Cleveland // Hood River & Rowena Crest

After our hike and drive around Mt. Hood and before we crossed the state line to visit Cleveland, we set up camp in the town of Hood River,  The Columbia River Gorge is amazing.  The scenic highway parallels I-84 and heads east from Portland, just north of Mt. Hood.  We traveled that route a few years back but never quite made it to Hood River; well here we are.

The small town was quaint and surprisingly inviting.  However, rather than stop at a bar or dine with my wife, the RV made it's way to the water where, once again, the kids went in. 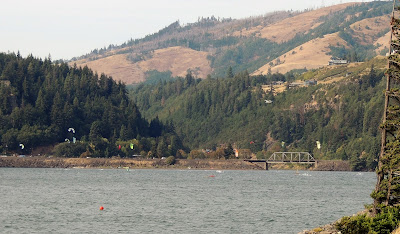 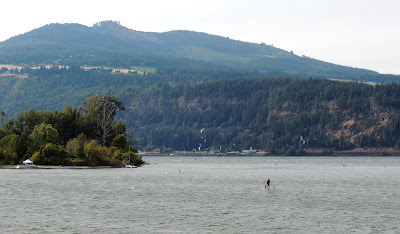 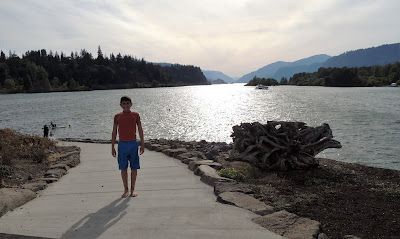 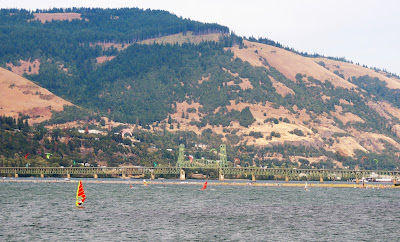 We hung out here for several hours, ate dinner and then cranked the motor - I had Cleveland on my mind.  Rather than taking the freeway though, we took the scenic route.  Being that I drove most of the scenic highway to the west last time, my hope was that the eastern roadway would be similar.  But, it wasn't.  No waterfalls, no trails, but we did summit at: 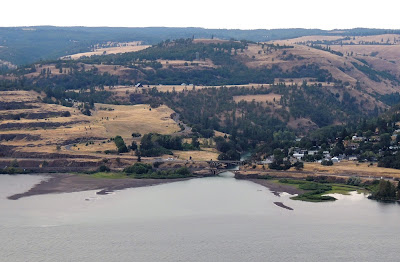 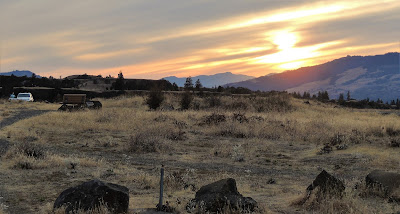 We got here just before sundown, so it worked out pretty well, except for the kids not getting along.  It was like a less than desirable episode of Dr. Phil, but we won't let that bring us down... 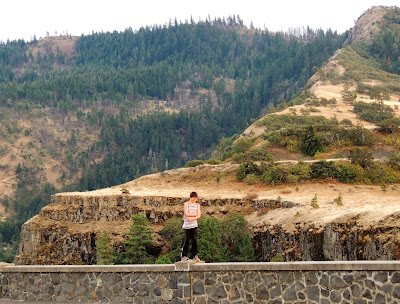 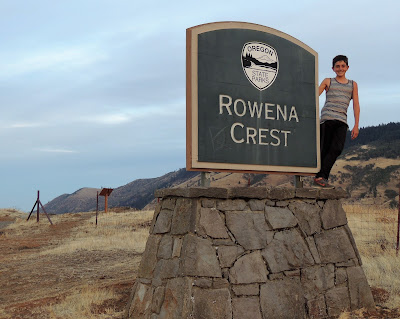 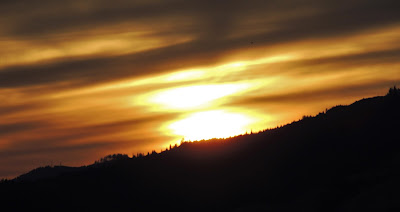 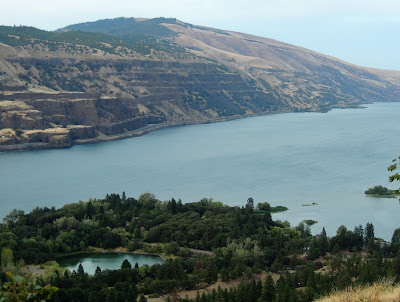 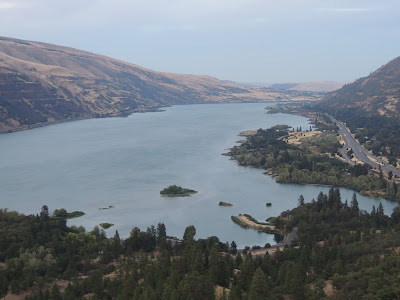 Pretty neat viewpoint, good timing...  Well, let's keep driving; hopping on I-84.  We exited off a couple times, drove through some cities.  Always interesting to do that.  As night overtook day, across the River we see:

Looks like it might have been a controlled burn, but maybe not?  The shot was zoomed in far, past the Columbia.

We finally crossed the bridge into Washington State, and elevation climb we did.  I could see Mt. St. Helens, I believe.  Too dark to know for certain, but the shadow dominance was there.  This creepy drive was neat in the dark, scary and narrow - imagine would have been sick views in the day light.  Hmm, may need to come through this way again some day.  If I do, I would plan it on the 2nd weekend of June when Cleveland holds it's rodeo! 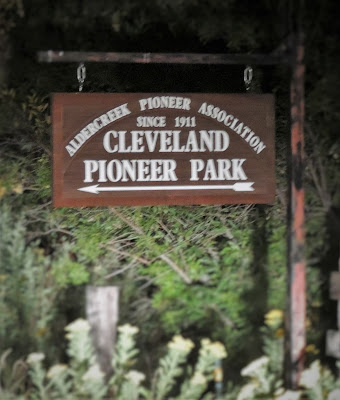 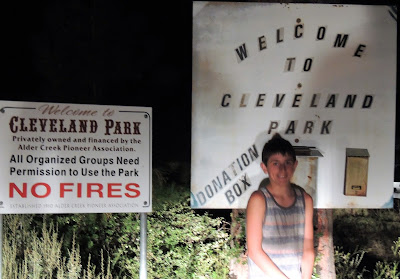 Cleveland is located in Klickitat County at an elevation as around 3,000 feet.  It was settled in 1879 by Ripley Dodge, who named it for the city of his native state -Ohio. (Ah, me and Ripley have lots in common).  I could not discover the population of Cleveland, but it doesn't look to be like many live here.  Not much in the way of surrounding communities either, except for Bickleton which is 10 miles away.  It was like an hour+ drive in the dark with nothing until this little gem was discovered.  No stop sign or stop light - don't blink or you will miss.

Cleveland & Bickleton are basically in the middle of nowhere, halfway between I-84 and  I-82.  There would be no reason for any normal human being to ever have the need to drive through here.  If for instance you wished to drive to Yakima, Washington, one would take Route 97 to the west through Goldendale or merge on I-82 from I-84 to the east. 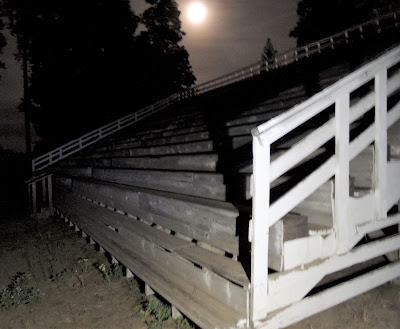 Cleveland contains an old cemetery and a rodeo, which is the oldest in the state. There is also said to be a 100 year old Spillman Carousel.
Cleveland's most famous grandson was William O Douglas, the longest sitting member of the US Supreme Court. His family moved from California to Cleveland before settling in Yakima, Washington. 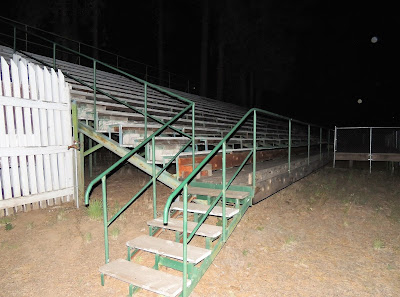 It was the middle of the night, Jess and Marissa remained asleep in the RV as Ayden, Donnie and I explored the Rodeo grounds.  The bleachers looked old and dilapidated and there were no animals around.  Its crazy that this place only exists for one weekend a year, but I presume others locally find uses for it - maybe? 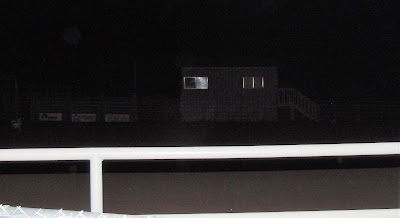 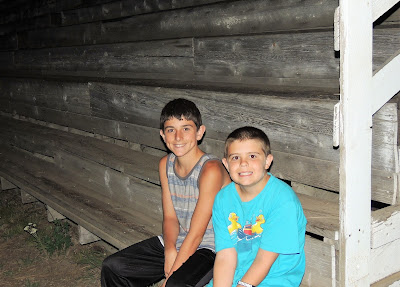 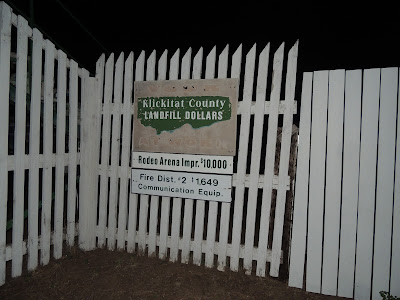 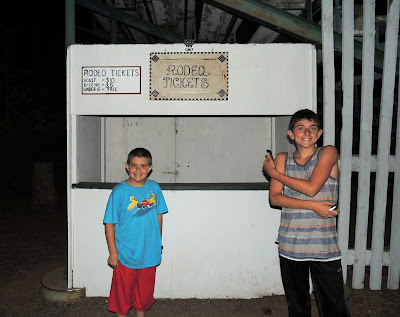 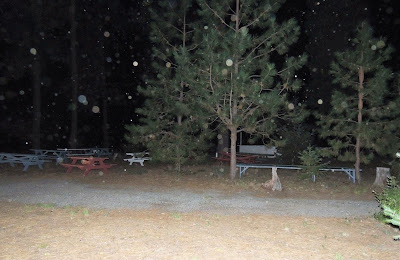 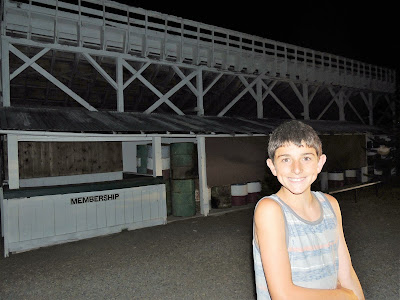 There are 28 Cities named Cleveland in America.  I just discovered this fact at this website:

Cleveland, Washington is now my 8th official visit to Cleveland, USA.  Every time I plan a trip to a new state, I am looking for Cleveland...

Posted by Jeremy Jacobus at 7:54 AM