Bethells Beach
This is what I had to wake up to each morning.  Well actually the first couple of mornings it rained but the sun quickly made peace with the earth.  Wednesday morning was quite windy so we decided to take advantage of our 4x4 off road tour with John. 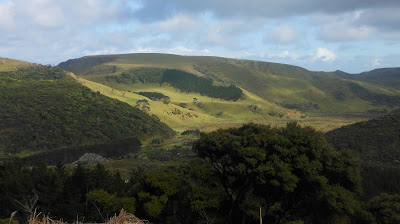 Views from the Jeep
Bethel: House of God.  --John explained that several large Korean families have moved into the Bethells neighborhood.  His inclination suggests that they feel protected due to the meaning of Trudy's last name.  Initially I though, hmm, this would be a great spot to be on December 21, 2012.  However, then I thought that this may be the first place to go so I am still currently searching for a cave to hide in, probably Missouri.


Onward with our tour... 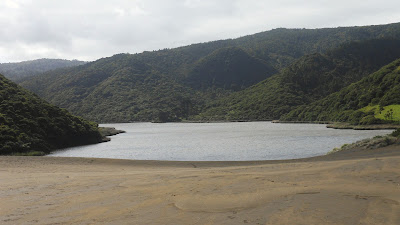 Essentially, the river meeting the ocean on day one will lead to this hidden lake.  John said that the locals often flutter this area on the weekends.  There is a gate that you can park by off Bethells Road and this site is approximately a 30 minute trek.  If you care to wander further around the lake, there is a track which will lead to waterfalls spilling into the lake. 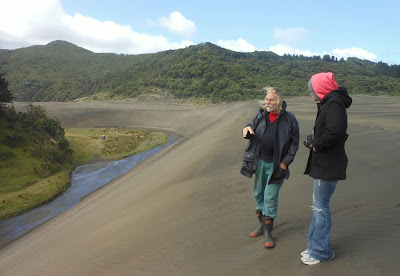 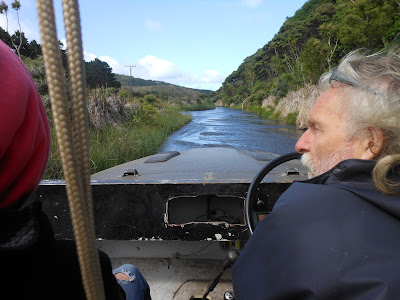 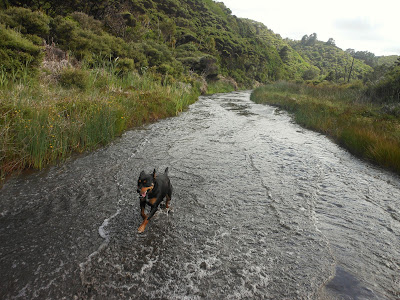 The Dog
We had to of gone several miles and John's dog followed us every bit of the way.  In fact, he accelerated in front before we reached the lake.  By the time we got there, he was having the time of his life.  Hmm, can't seem to remember the dogs name, or if it was even a male for that matter.  Funny thing is, New Zealanders are very literal with their words.  Commonly, the cat is called "Cat" and the dog is called "Dog".  Their currency has no penny or nickle, but they do use a "10 cent piece", not called a dime.  In addition, they round up or down a final purchase to the nearest "dime" and the 15% sales tax is already factored into the price.  Lets proceed shall we... 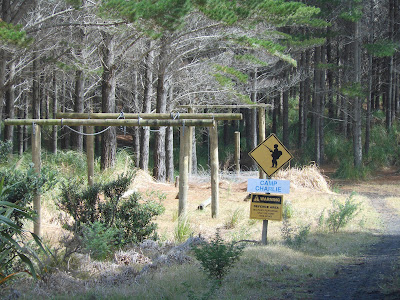 I believe the army rents space for training here 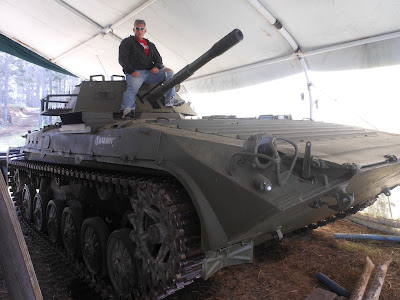 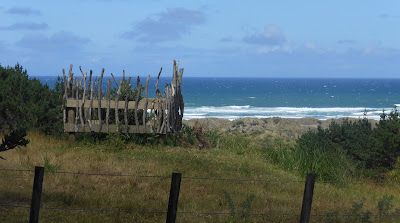 This is a horse memorial 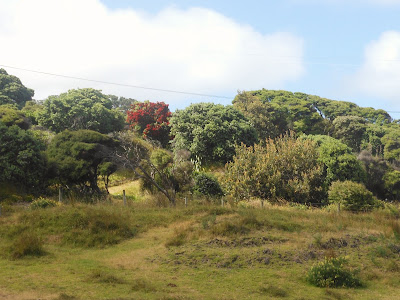 Our tour was over but the day was only beginning... 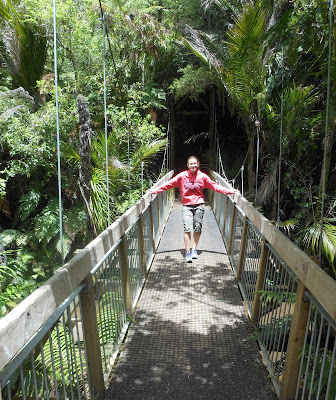 A Suspension Bridge leading us into the Rain Forest
To reach the trails in this area from Auckland, head out the 16 West.  Exit Lincoln and turn left and then turn right on University.  Follow this to the roundabout and take Swanson which will turn into Scenic Road.  Turn right on Bethells Road and look for the "Ark in the Park" sign on your left.  This is Falls Road.  Turn left, pass the golf course and park all the way at the end.  Welcome to Waitakere Ranges Regional Park... ﻿ 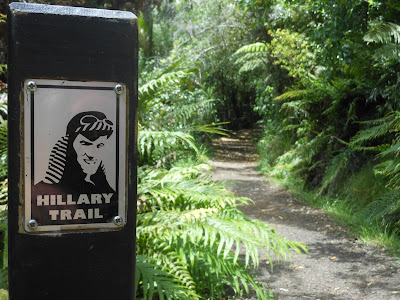 This picture is dedicated to my sister Hilary, (one "L") 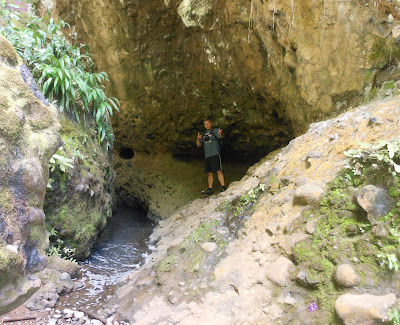 Down a side trail (Falls 15 min rtn)
All of the walking tracks are labeled by time.  RTN stands for Return (in and out).  We ran into one hiker who said that the times are "Rubbish", a commonly used word out there.  I found her analysis mostly correct, except for when I got too tired.  Usually, you will be able to outpace the suggested time. 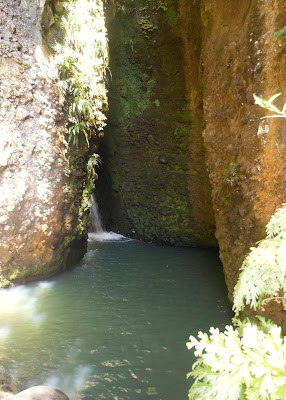 My best shot of Cascade Falls :( 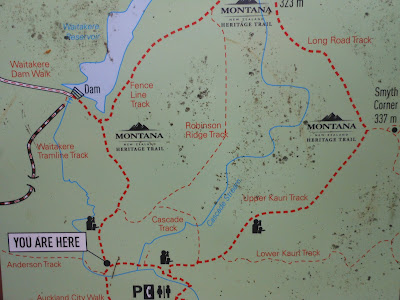 A good trail map of this immediate area
We began tramping down many of the tracks but the trails were closed off.  Seems like this is seasonal and/or due to repairs being made from the rough and rainy winter months.  We nearly turned back at this point but the ran into a couple of other groups.  The next part of our hike was not one Jessi was fond of, but I talked her into it nevertheless... 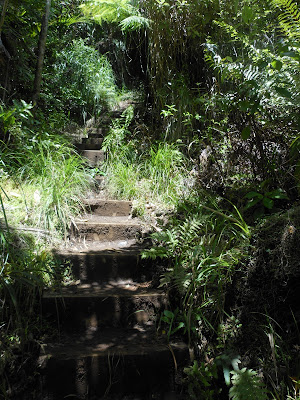 We took the steep trail toward the Dam 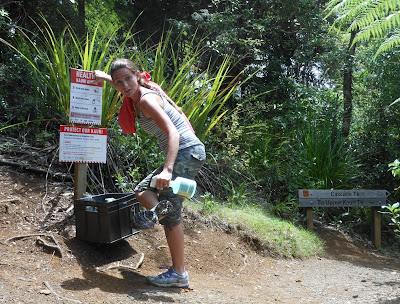 They are serious about keeping insects in their proper domain
The process begins at the airport where security will ask you if you are bringing hiking boots into the country.  New Zealand is a fresh country and they fear introducing foreign species to their land.  Of course, all animals living on this vast island were introduced at one point or the other, with exception of an island bat which evolved naturally. 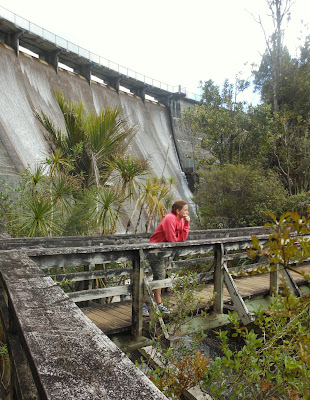 Waitakere Dam
This is a great place to rest and eat your lunch.  Jess and I ran at the top.  I felt like James Bond from Golden Eye.  If you bend your eyesight around the corner, you will notice a massive waterfall.  The angle is not favorable for photos.  Rather than crossing the dam on top, loop back around the bottom, which will actually raise higher and then bring you back.
The one great thing about our entire trip to New Zealand was that we saw several more waterfalls after this and each encounter surpassed the one previously.  Stay tuned to more updates, it's well worth it... 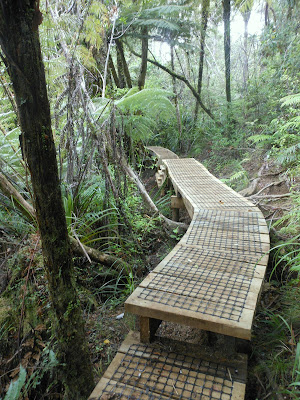 We decided to take the shorter Cascade loop trail back 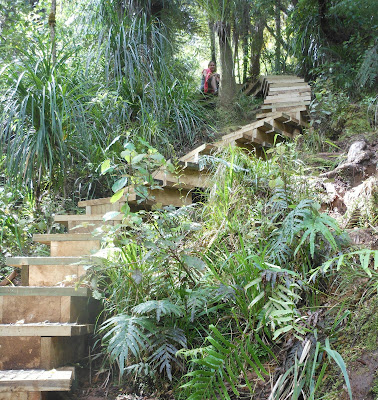 The track was a rollar coaster ride and exhausting
The board walk footing was great, but the black webbing for traction made me dizzy

A bird of some sort, hmm...?
This Hike is over but this day and trip will continue...
Posted by Jeremy Jacobus at 11:19 PM