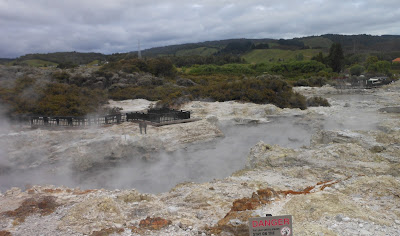 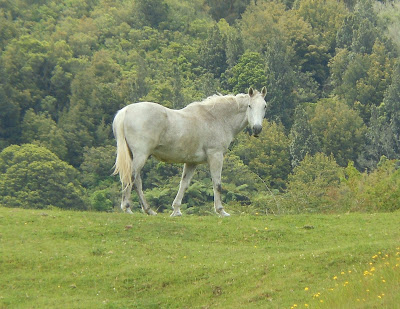 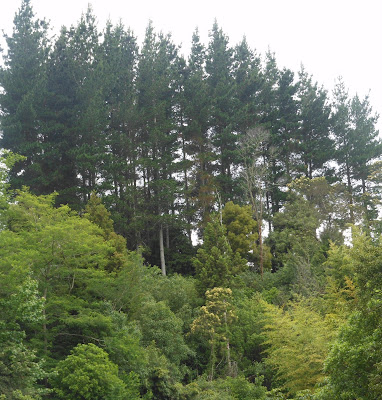 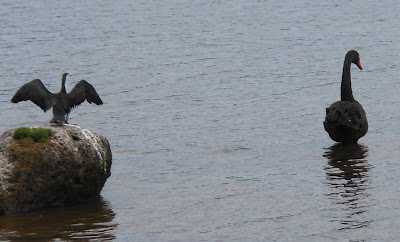 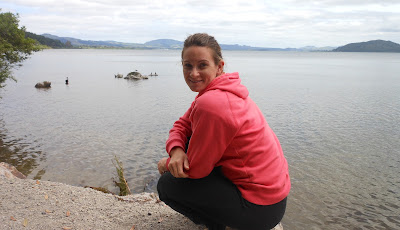 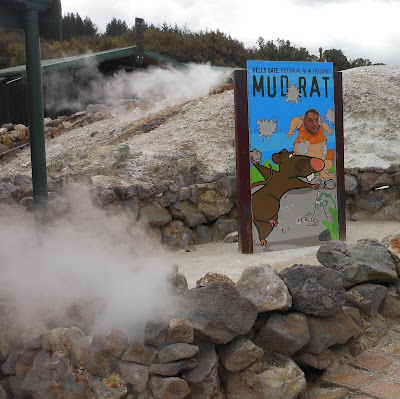 Hells Gate
John pointed out on the map two touristy type towns; Rotorua and Taupo.  Each town boarded a lake and contained natural wonders.  We only had time in the day for one additional adventure so we chose Rotorua, the closer of the two.  Before taking the highway into town, we circled the long way around the lake to the north.  John said that there would be redwood trees.  Well, coming from Cali I have seen some amazing redwood trees so maybe I got my hopes up.  The trees near Hamurana were nice, but nothing like what you would see at Big Sur or Sequoia National Park.  We ran into some locals at a coffee shop and they said there were more redwoods south of the town but we never made it there. 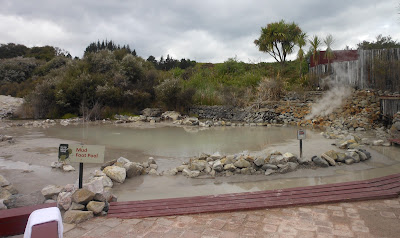 A park built around the geysers
Continuing around the lake, we saw a brown park sign that said Hells Gate.  So, we veered off the main road for about five minutes and found some natural geysers!  Lucky find!!  As soon as we got out of the car, the sulfur filled the air.  I loved it and remembered John saying that he loved to go to Rotorua to clear his sinuses.  Jess on the other hand was not fond of the rotten egg like smell. 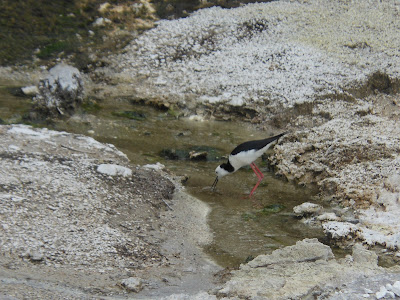 Birds bathing and drinking the warm natural waters
I was disappointed to find out that yet another natural phenomenon had a structure built around it.  I think this place was charging like $15 per adult plus additional fees if you wanted to put your feet in.  This time, I pretended to not notice the sign and walked straight through.  There were only a few other people here but somehow we made it in.  The place was cool but I'm glad we didn't spend money on it.  We took about 10 minutes to walk around the loop trail and then headed back to the car. 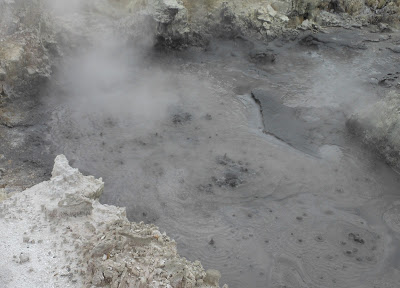 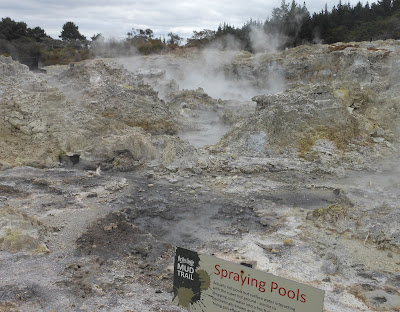 Back to the main road enroute to Rotorua.  Next on the attraction list was to locate the spillway from Lake Rotoiti to Lake Rotorua.  By the way, on the South Island there is a Lake Rotoroa so this can be quite confusing.  Unfortunately, we did not locate the connection.  John said that one lake funnels into the other at one spot and spills millions of liters of water every minute.  I formed a visual of Niagara Falls but never got the chance to see it. 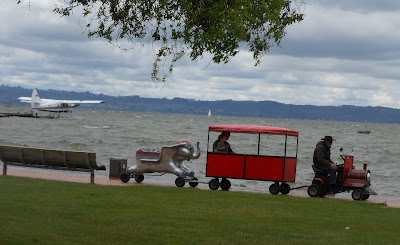 Choppy Waters on Lake Rotorua
We finally made it into Rotorua and the first thing you will notice is the smell.  Very strong sulfuric scents, which suggest there must be more amazing geysers somewhere around.  John had pointed to another spot on the map but at this point, my memory was running thin and we did not search. 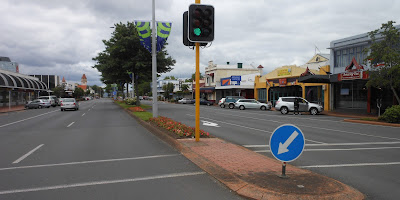 Streets of Rotorua
All of these towns south of Auckland are set up similarly.  The main road goes through the outside of the town and gives way to "City Centres" that intersect at the round about.

Drive Thru Windows at Burger Thing and Mac Donalds
Can you believe these prices?  The New Zealand dollars exchanges for approximately .82 American so the valuation is somewhat comparable.  However, prices eating out anywhere is through the roof!  We ate most of our meals free at the Bethells and now that we are in the real world, we were forced to pay!  We didn't eat at Mc D's or BK, but I thought it would be funny to ask what was on their dollar menu.  NOTHING.  The cheapest burger is $3.00, and that's without cheese.  We did order a Mc Flurry.  They don't have M&M's or Recees.  They have Strawberry Crunch where tastes like strawberry milk and honeycombs.  They also have Bubble Gum Squash, the most popular Mc Flurry in New Zealand -- we didn't try that one.  For lunch, we ordered a large pizza at Pizza Hut for just $10 bucks.  Heck, a whole pizza beats a $12 value meal at Burger King... 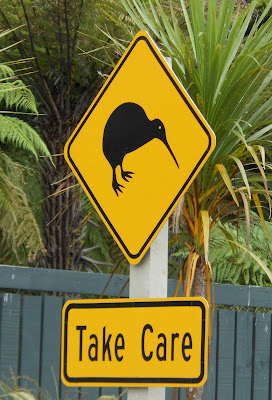 Kiwi Crossing
The Kiwi is a fruit but in New Zealand, it is the National Bird.  The term Kiwis is referred to New Zealanders just as we call ourselves Americans.  When I heard the DJ in Davenport talk about the Kiwis, I was kinda confused.
Just as you are leaving Rotorua, you will pace an indoor Sky Slope.  The place looked cool and they had an actual skylift outside and above the building.  <~Wondering why Vegas hasnt done this yet?  Next door to the skylift is a zoolike park.  We stopped in, walked around the outside and shopped at the gift shop but did not pay the $35 each to go in.  As it turns out, the nocturnal birds were taking their long afternoon nap so we would have had to stick around until 8pm to actually see the Kiwi.
Next door to the Kiwi Park was the Mitai Maori Village.  We were not interested in a cultural lesson of these natives but I heard the food was good... 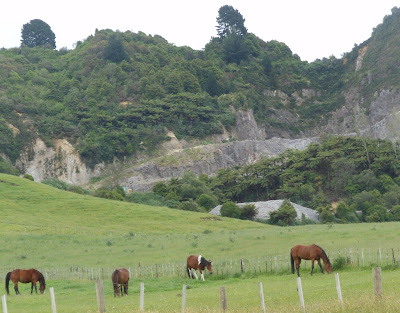 Paradise
From what I can remember, we were fooled once again by another brown park sign.  Once again, in Cali you may spot brown park signs and know that you are going to a state funded place that will be free.  Just outside of Rotorua, Paradise Wild Park lead us to another Kiwi Farm.  I think they shows reptiles and Kiwis here.  The park itself looked no bigger than a softball field.  Shell out another $29 each and they will grant you entrance to the 20 minute walkabout.  The drive was 15+ minutes each way from the main road.  You begin by going over humps and bumps in the neighborhood but then it opens up to the back country, as seen in the picture above.  There were so many shades of green so the ride was gorgeous but the park was our Uturn.
LORD OF THE RINGS: 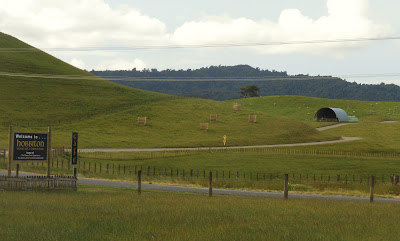 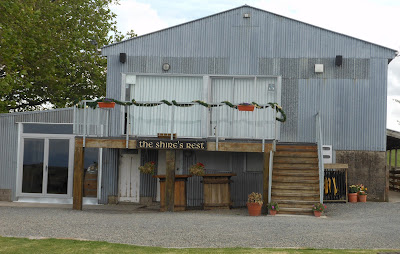 What a dump?  By the time we reached Hobbiton, the place was closed?  It's located just outside of the town Matamata down some back country roads.  We actually got gas in town just after the waterfall hike in the morning but because we were heading to Rotorua, we bypassed the Rings.  Figuring that we would be heading back through en route to Hamilton, we would stop by right now.  I looked online at the pricing and had no desire to take one of their $100+ tours for the Shire Experience.  I figured that the place would still be poppn by 6:00, but this was not the case.  Once again, New Zealand pulls a fast one on us trying to make a buck on a cheesy attraction.

But, all is not lost with this.  We hiked around the outside and took some awesome pics.  There are no tresspassing signs posted so we didnt climb over.  The movie set must have been tucked away behind one of the hills.  Seriously though, the pictures do not do this place justice.  Absorbing the freeness and freshness of the greenland in person was priceless: 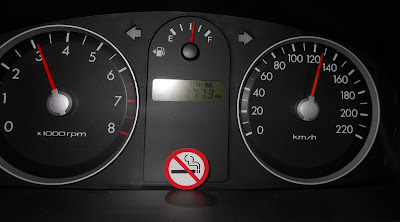 High Speed to Cambridge
I ride faster than this on my Motorcycle, and that's in Miles Per Hour.  Our small Hyundai seemed to max out at about 135 kph.  We drove up on Cambridge in the early evening hour.  I took some pics but they are not worthy of making the blog.  The town was set up like Rotorua and all the rest.  It felt like it had an old fashion prestige to it.  I suppose it reminded me how a random town outside of Boston, MA would be like. 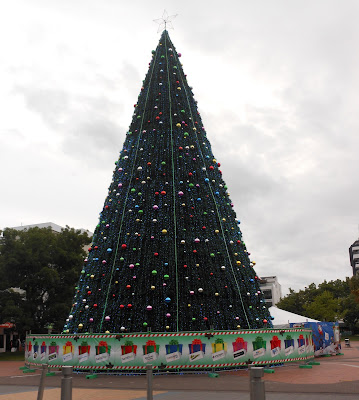 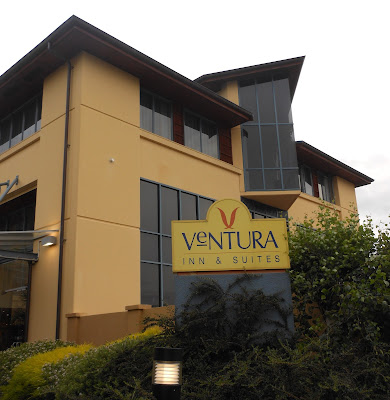 Our Hotel in Hamilton
I thought it would be funny to fly all the way to New Zealand just to stay in Ventura, my home town here in Cali.  Hamilton is a fun town, but we were here on a Sunday night so not really that fun.  We had just missed the Christmas parade and live music so there wasn't much left to do.  Hamilton is an actually a city.  They had a "Sky City"; this is what New Zealanders (Kiwis) call sections of towns with Skyscrapers.  I would say Hamilton is to Auckland like Cleveland is to New York City.  -- Day 392 complete.  Just one more full day left for us in New Zealand...
Posted by Jeremy Jacobus at 11:23 PM