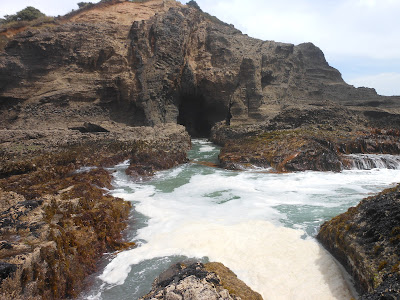 The entrance to the Blowhole at Piha 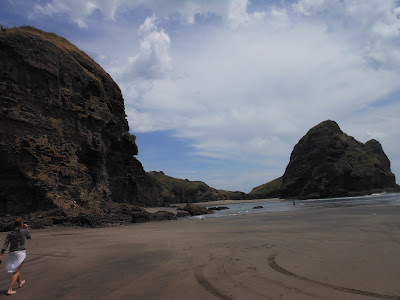 After trekking down from Kitekite Falls, we took the short drive to Piha Beach.  I must say, this was my most favoritest beach on the Island.  I say that like a kid because I felt like one.  This black sand beach is essentially one bluff indent away from Karekare, where we began the day.  After hiking Kitekite, meeting up with the sea water again was a perfect chill. 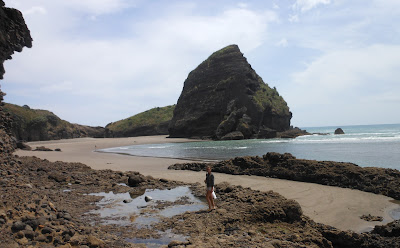 The most spectacular part of this beach is to the left.  It's deceiving.  It looks like you'll be able to cross over with no problem but even during low tide, you'll have to wade at least knee deep at some point during the cross to fantasy land.  It's easier to keep your shoes on and scramble over the rocks.  It's not difficult. 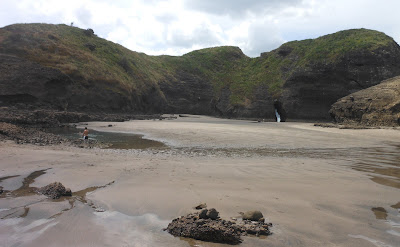 A mostly private and dry cove 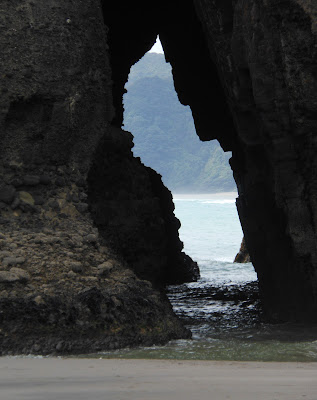 Dare you to swim through there 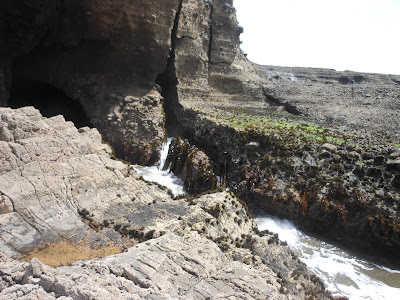 The New Zealand Blowhole
A Blowhole is a marine geyser.  Essentially, air is forced into a sea cave by a wave and when the water recedes, a powerful spout will shoot water straight up into the air.  Unfortunately, blowholes react on tides, weather conditions and mainly seasons, winter being the best month.  Sure, its winter in America but in New Zealand it's summer time!
The New Zealand Blowhole is relatively unheard of because even at its peak, its much smaller than the competition.  For example, the Blowhole at La Bufadora may spout up to 100 feet in the air.  This small bartering town is located about 45 minutes south of Ensenada, Mexico along the Baja coast.  I've been there twice, not in my 1000 days so don't try searching for it here.  The first time I visited, it was mid spring and the geyser was alive.  The second time was in summer and it didn't even tickle.
On this day in New Zealand, there were signs of life but even without the hole spouting, the waves crashing in to this unique area were amazing.  I straddled the rocks and took some chances.  I watched the system for a few set of waves and put trust in my judgment.  --Across the world, there are only a few notable blowholes.  Australia, Maui and Tahiti are the three others that I have heard of but I am sure there are some tiny ones across the way here or there.  Hmm, wonder if Cali has any??? 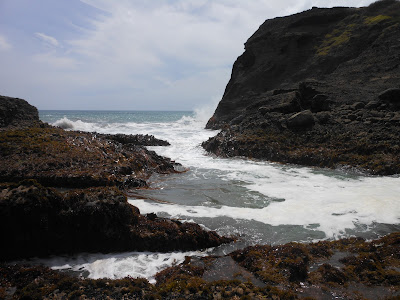 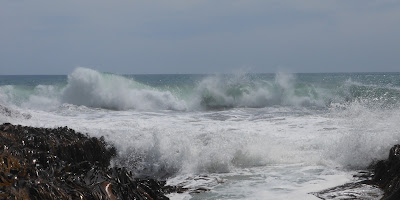 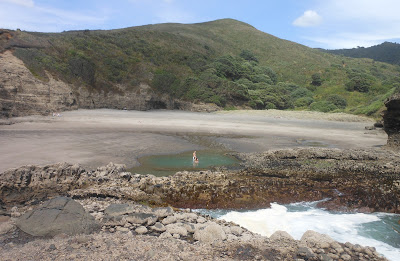 At high tide, a tide pool fills and makes for a cold like Jacuzzi chill spot
Our day was coming to an end so Jess and I drove back to Bethels before dusk.  We ate a solid dinner and then ventured out to listen to live music.  We remembered that Elevation Bar played live music on Friday Nights.  Only problem is, we forgot that they said 5:30 and by the time we got there, they were closing.  The drive to Auckland would have been just about as far, so many windy roads and what not.  Oh well, this was our second to last night at Bethels and it was chill watching the New Zealand version of Who's Line is it Anyway.  I didn't really get the jokes, but it's interesting how they can cus on regular TV.  Isn't this the country that does the news in the nude?  We didn't see that but we did see an interview with Robin Williams in New Zealand promoting his appearance in Happy Feet 2.  I don't care which country you're in; Robin Williams is a funny fuckn guy!  --Not censored; this is a New Zealand Post :)
Posted by Jeremy Jacobus at 8:02 PM