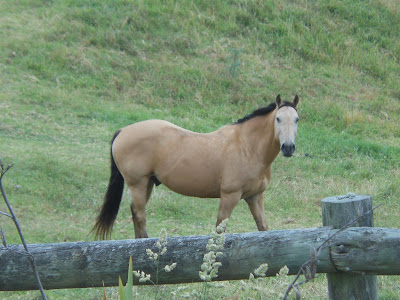 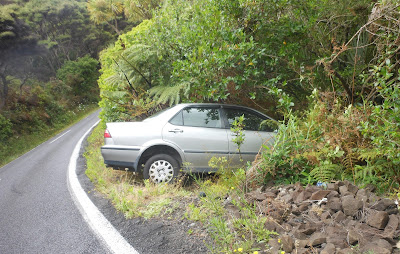 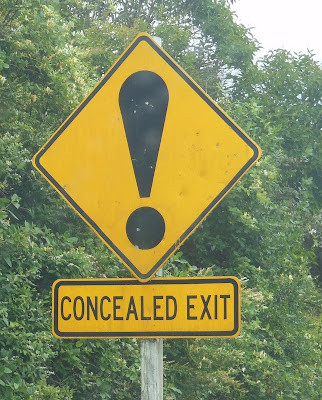 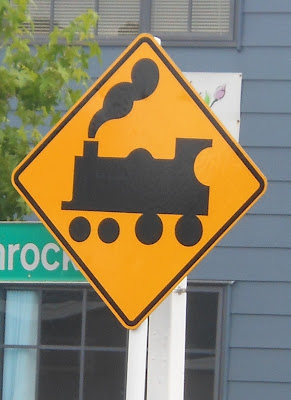 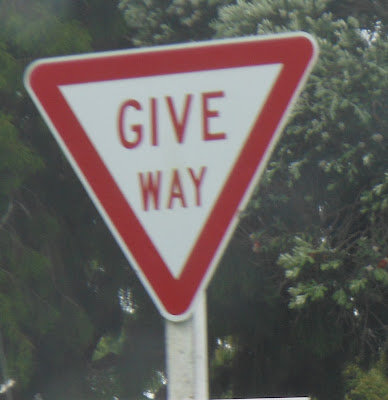 Give Way, New Zealand's term for yeild
(they use it at every intersection and round about) 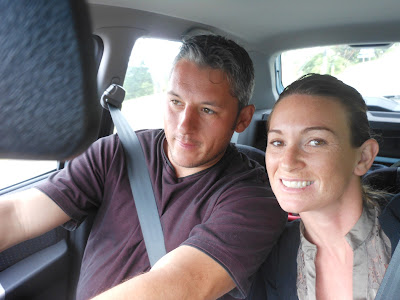 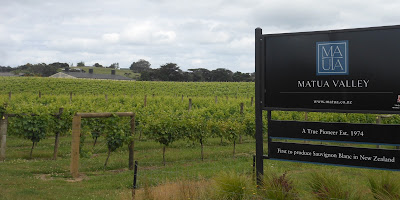 Best Winery in the land 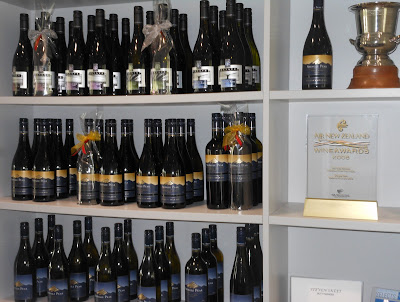 Jess and I have never been to Sonoma or Napa Valley.  In fact, we have only gone wine tasting once before, and that was in Filmore.  I don't think that really counts :)

Without any plan heading into the day, John suggested a few places to see to the north.  Since we had already exhausted the Waitakere Ranges and city of Auckland, North we drove.  Heading up Bethells road, we took the back roads to the 16.  This lead us to the small town of Kumeu.  We continued west to Huapai and stopped at our first winery; Nobilo.  Our first impression here was not much better than the Filmore experience.  The lady game out staggering as if she had been drinking all morning.  It was barely 9:00 so maybe she was hung over from the night before.  Another young girl was there, possibly her daughter, but she didn't say much.  We sampled some wines, good whites and blah reds.  Jess is fond of champagne so the lady opened a bottle for her.  She poured herself a glass first, guzzled it down, and then poured us a glass.  After about ten minutes, we exhausted our efforts and hit the road with a real mild buzz.

Next stop, Cold Creek Winery (I could be wrong with the name?).  This spot is just a minute up on the left from Nobilo.  Unlike the other establishment, there were customers here.  The russian lady serving the wine was very knowledgable and friendly.  We proudly sampled all of her finest and then ordered an additional glass for six bucks.  I felt bad; they're giving us all this free wine for free so it only seemed fair to drink a bit more and pay for it.

Driving west to northwest on the 16, our next destination was Mutua Valley.  John said that it would be on the right.  So, a ways up, we found Mutua Road and turned right.  We drove a ways and never found it so we came back.  Oh well -- just 800 meters further, a sign for Mutua Valley.  We turned right, crossed the tracks and followed the road for many kilometers.  Good thing we had patience because these wines were excellent.  It's a popular place and even a tour bus stopped through during our tastings.   We tried all the whites and all the reds and they all were excellent.  Of course, by now we had about the equivelent of 10 glasses each so of course they would be great.  But really, they were smooth and perfect.  Jess and I decided that the best white wines come from Marlboro (The Northeastern portion of New Zealands South Island, near Wellington).

"*Special spot somewhere outside of Parakai*"
Yes, this was a special spot for Jess and I.  We were driving for quite awhile and I was being entertained...  Finally, this location was the one...  We of course were looking for the hotsprings!  John said that there were some out this way but we didn't find it; but we did find something else.  --Once I gathered my senses, I realized that we had gone about 15 kilometers out of the way to nowhere.  We were somewhere between the Tasman Sea and Kaipara Harbour which is said to be one of the largest natural harbors in the world.
Day #391 * Hike #437 * New Track #417
Saturday December 10, 2011 (New Zealand)
Waiwera & Cricket - New Zealand
My Tripometer: 4 Hours * 2.75 Miles (walking) * +25 Feet
We drove back towards Helensville and then up and over to Waiwera.  The drive was long and the wine was begining to ware off.  John said that there were great hotsprings in Waiwera, which is a beach community north of Auckland on the Hauraki Gulf coast. 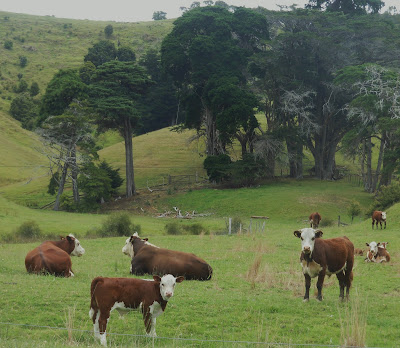 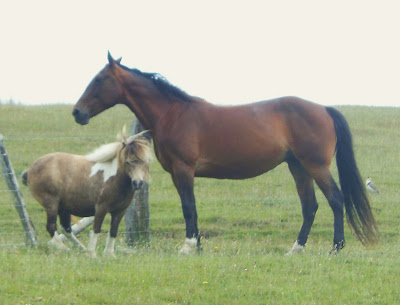 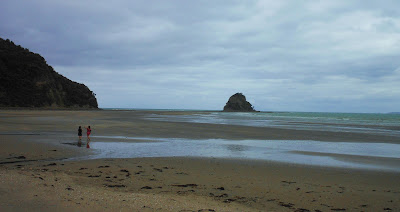 
A cool weather system crept in and by the time we reached the beach, it was pretty much out of our car and back in.  There didn't seem to be anything too exciting in the immediate area, no blowholes.  Obviously it was low tide and we left it at that.  The main and only real attraction in this town was the hot springs.  However, we were very displeased to discover that the springs were surrounded by a wall and building.  I believe the price of admission was something like $20 bucks.  From there, they charged through the roof for treatments.  I guess this is cool is you're looking for a day at the spa, possibly a massage.  Great for those lazy folks who don't like to hike to the springs.  We were disappointed, discouraged so we stopped by the corner store, ate some hokey something ice cream and jumped on the main highway toward Auckland. 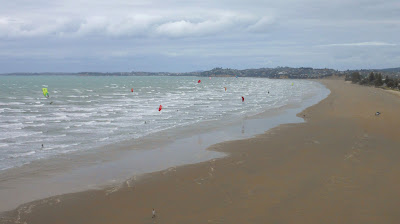 
Just north of Davenport we intersected the beautiful Orewa Beach.  The weather seemed a bit better down here but we didn't stay long.  Today's second hike of the day is a combination of many stops and small walks.  We began to drive around the bays but we just tried to obsorb it rather than taking pictures.  Actually, Jess and I really... well... had a good time for the drive.  Reminds me of Charlie Sheen in the movie The Chase. 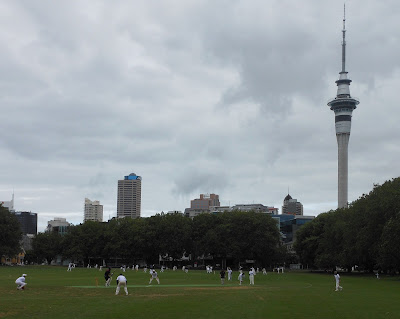 We found our way to Auckland and took a timeout for some Cricket.  This is Cricket season.  John told me that a single game of cricket will take five days to complete.  This was my first and likely last ever game that I'll probably ever see.  I suppose its an acquired taste, much like chess.  I appreciate the skill and spin of the ball I suppose but there is no way this sport would ever make it in America.  Rugby on the other hand I believe will have a market here ten years from now.
Before heading back to the cottage, we drove around the famous Ponsonby District.  This is an upbeat area just outside of Downtown Auckland.  Independent Coffee shops thrive at day and pubs flourish at night; fun scene. 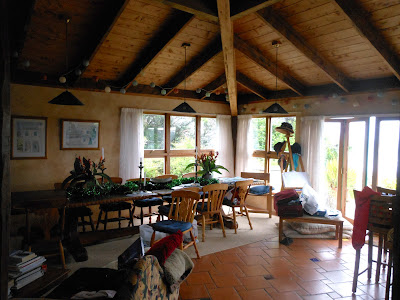