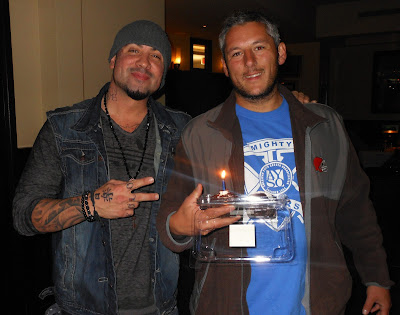 Two Celebrities hanging out in Hollywood

It was the day after my birthday and after a long day in Long Beach, we stopped by Hollywood on the way home.  We took the 710 Freeway to the 5 to the 101, but the 101 was as slow as a turtle so we took some random exit.  We drove along the side roads for awhile and Jess found four one-dollar bills blowing around on the side of the road.  The neighborhood was questionable but she ran out, grabbed the money and jumped back in.

Eventually, we wound up in Hollywood and found a free place to park on the street, a street over from the main strip.  Our hike started here just as a hundred BMX riders were leaving a parking lot for some sort of marathon ride.

On the strip, Jess and Ayden were walking ahead while I had one of the daycare kids in my arms.  I was lagging and then came across Vino Alan, from the X Factor.  I basically said, "What's Up Vino."  He responded and then I told him to, "Keep it Going!"  --That was it, no big deal.  I finally caught up to my wife and told her that Vino was here.  She saw him and then began to follow him into the Kodak Plaza.

However, just before catching up to him I yelled, "Jess".  She was literally three feet behind him, closing in fast.  She turned to me and Vino also turned around.  I essentially dissed Vino by calling out to my wife, "Get Over Here", just as Scorpion once said before upper cutting his opponent.

Anyhow, I saw some strange random game show happening and they were calling people from the audience.  With a kid in one arm, I used the other arm to nudge Jess forward.  When we were within range of the stage, from the far back we continued to walk forward and I was desperately pointing to my wife.  The host of the show picked three people, and Jess was the last one... 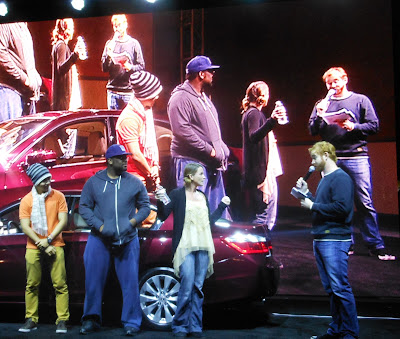 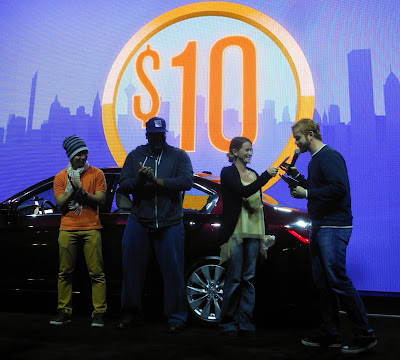 Later, we worked our way back to the bottom floor and Jess surprised me with a cupcake for my birthday.  We had one dilemma, no lighter to light the candle.  So, we waltzed back up towards the top floor to a restaurant that we once ate at, care of Divorce Court.  Yes, some sort of Bar and Grille where Divorce Court comped our meal.

Well, lookie here.  Vino Alan was right at the front entrance.  After Jess asked the host to light my candle, she asked Vino to sing me Happy B-Day.  Well, he wouldn't sing, that would have just been weird, but we did hang out for a bit.  He had been singing for the last 8 hours and he was just out wandering around, looking for some loven.  His last tweet as of yesterday even indicated that, not that I follow Twitter.

Vino Alan is just slightly older than me, shorter than me and sings nearly as good as me.  Hey, I was in choir at Beachwood High, don't underestimate my voice lol...  Vino told me that he has been leaving out here in Cali for the last 6 years but he reigns from Mizzu.  We chatted with him for awhile but then let him go.  We had to get the daycare kid home!!! 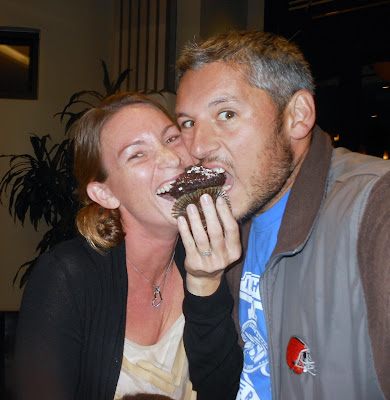 The Crumbs Cupcake was not so great, but it was nice sharing with my wife! 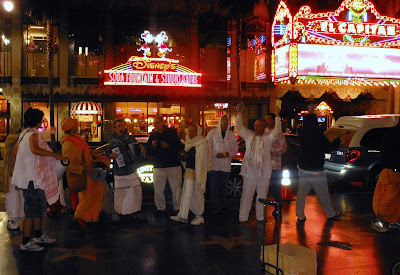 Street Performers, as always out front


**We made a hike of it.  Shot down some streets that we haven't walked down before but most of the elevation gain came from the stairs at the Kodak.  --My computer crashed and it cost me $200.00 and five days to fix it.  Thus, I'm not sure what Hike# this one was, I am posting it out of sequence but I will get back to uploading this blog.  Closing in on my thousand.  Good Times...
Posted by Jeremy Jacobus at 7:43 PM