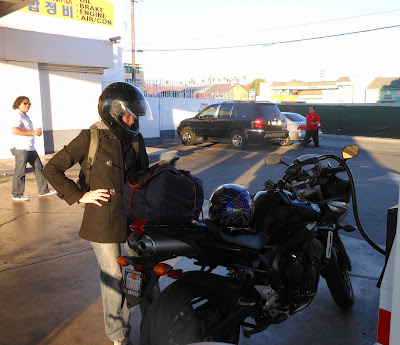 Monday was 1 1/2 figure eights plus warm up and cool down.  This was less difficult than last week but I ran the 3k distance just two days after my race.  My legs had no relief from my run off Mt. Lee on Sunday, yet I managed to complete the 3k run in 16:22.  That's 40 seconds faster than my racing time!  Granted, there was 100 feet less in elevation gain in this run and the track condition wasn't sloppy.

Tuesday was similar to last Tuesday's run.  We ran for about 20 minutes.  The goal was to keep it easy but somehow I separated from the pack with Chris, the 8-year-old star sensation.  Hey, this kid can run a mile in about 5:30 and in my entire life, I've never clocked anywhere close to that.  At first, the jog was no big deal but as Chris broke away from the other runners who appreciated the day off, he increased his speed.  I'm not sure how he does it.  His little legs are moving so fast.  I tried to hang with him by taking long strides but I could not keep up that way.  Thus, I had to pump my knees and really move.  In the final stretch, I nearly gave up but since I was neck and neck with him, I showed him what a longer stride could do.  Yes, I beat him!  I kept it real for him, as a coach, I allowed him to stay side by side till the end so he could give it all he got.  I'm just glad he didn't put me away sooner because if this were a race, I would never have seen him at the finish line...

Wednesday I ran around the park a couple of times without my watch.  However, I did bring Sammi.  After about 3/4's of a mile into it I decided to keep it easy.  I have sever shin splints.  Actually, I thing there's more going on with my legs but without medical insurance, guess I'll never really know.  For real though, it hurts bad and especially my right leg, it's way tender...

Thursday: Happy Thanksgiving.  There was no cross country practice today but we all had instructions from the head coach.  Ayden's goal was to run four 400 meter runs.  Some of the team was suppose to meet up at the park, but I only saw a few of them.  They were already running thus I ran with Ayden separately.  Unfortunately, that did not go too well.  Jess and Alyssa were playing soccer and after one 400 meter run, Ayden walked back to the soccer fields.

Despite the pain in my legs, I completed the four 400's.  I would run one, then walk one...  Here are my not so impressive times:
**If this were an actual mile straight through, my time would have been 5.43.79.  Hey, I just set a PR!! --In all, I accumulated 3.5 miles on Turkey Day.  I'll admit that I was jealous watching several groups of dudes playing football.  I had a chance to get in a game this year but I passed up on it.  With the Vacation coming up and the TV Show, man, --  Ugh, I gained so much weight this weekend and I didn't really eat that much.  It sucks being 38.  What's it going to be like when I'm 50?  My body is not meant for this ware and tear... 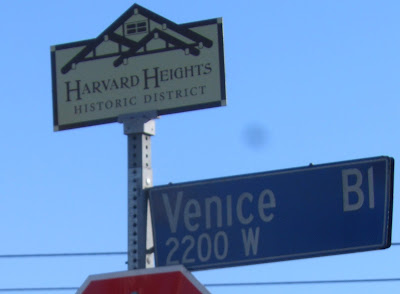 We were somewhere by Culver City.  We exited the 10 Freeway at Western, which is just one exit before Crenshaw.  I believe the graffiti ridden sign said Michael Adams District.  I'm not sure if I recalled this correctly but about a mile from here we did enter the Harvard Heights area.

Jess and I were on a mission to purchase some restaurant equipment.  The topping bowls here were 75% cheaper than what we would pay for them in Ventura.  The only problem was, how are we going to bring all of these back on the motorcycle?

We walked around the neighborhood lugging the heavy pans.  We found a Uhaul and we purchased some bungee cords.  I then convinced Jess to continue walking into Korea Town to call this a hike.  She took some pics of the streets with her phone, but those will probably never make this blog...

Although this blogpost is over, the night out with the pans was far from over....
Posted by Jeremy Jacobus at 10:29 PM