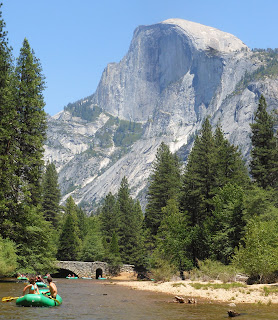 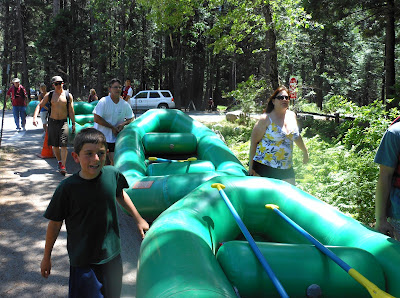 From Curry Village in Yosemite, walk your raft to the Merced
***Problem, you need two adult paddlers to rent the raft and since I was alone on this trip with Ayden, we could not float.  However, another father and his son were faced with the same problem so we teamed up and rented it together.  The pricing is $28.50 per adult and $23.50 per child but I convinced the retailer to waive the fee for the kids since we were teaming up.  Good Deal! 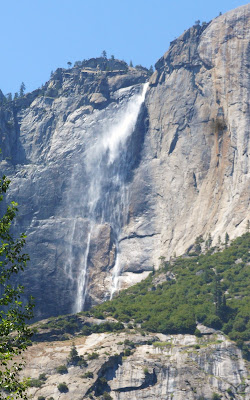 At first we raced out of the gate down the river.  We were determined that no one would beat us.  Then, the ride became a nice relaxing way to spend the afternoon.  It was hot down at this elevation and the sun was strong but the flow of the water sprinkled a refreshing mist... 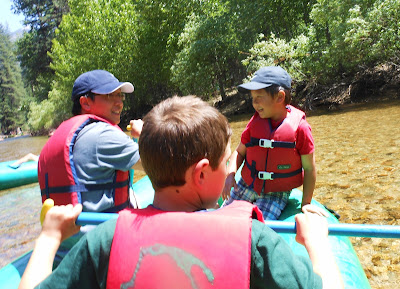 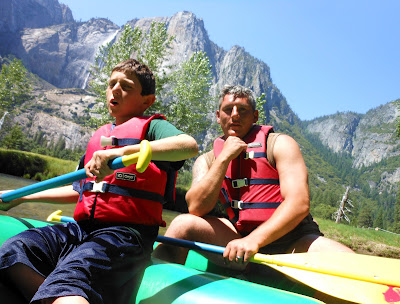 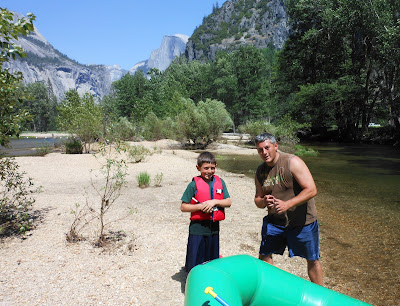 The three mile trip took about an hour and a half for us.  You can take all day if you like.  We stopped once at this island and then continued to the end past Swinging Bridge.  From there, we had a free bus ride back to Curry where the hiking aspect of this "hike" began. 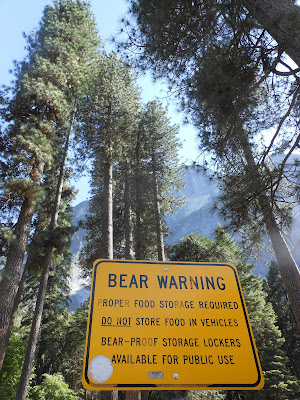 Back in Curry Village 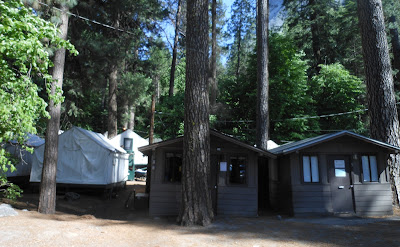 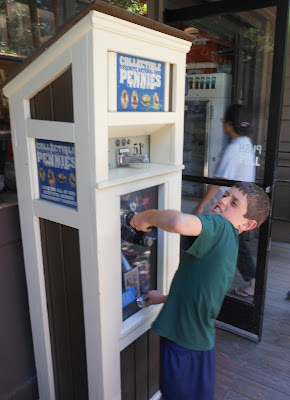 Does anyone else by a .51 cent penny on their vacations? 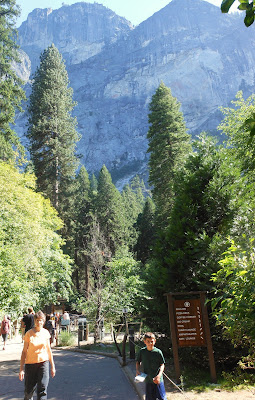 Exploring the town
We completely missed lunch, with exception for that one hot dog at Glacier Point.  We discovered a buffet in Curry Village but it was too late for lunch and it did not open again until 5:30 for dinner.  There were other spots to eat but Ayden was set on the buffet.  We walked around for awhile but by 4:45 we decided to drive to Yosmite Village. 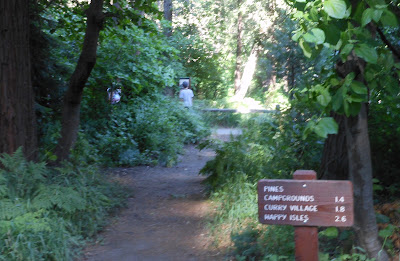 From Yosemite Village, we could always walk back to Curry 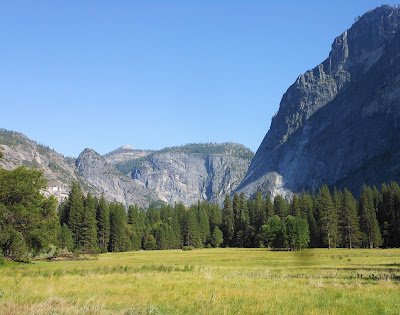 Hiking along the even level trails
Many of my pictures in this area did not turn out.  The only real wild animal that Ayden and I saw on this entire trip came in this field.  It was a deer, big deal.  Still, the close up pic was all blurred!  We walked back along a shady path to The Ahwaahnee Hotel.  There were some cool rock formations but we turned around before going to far because we were Hungry!
However, it appeared to be impossible to drive back to Curry Village?  Due to the one-way roads, we could not find the right way back.  Then, we got stock on the one way road exiting out of Yosemite Village all together.  There was no turnoff for many miles and when I finally reached the left turn, I passed.    It was nearly 6:00 at this time and I knew we had a drive ahead of us still.  My motel for the night was in Mammoth so I took the right turn to follow the 120 up and out of Yosemite.  I will need to plan a return trip soon to hike to the falls, mirror lake and the dozens of other hidden wonders in Yosemite.  However, the visual awes were not quite over yet.  In my humble opinion, the best was still yet to come...
Return to CaliHike.blogspot.com HOME PAGE
Posted by Jeremy Jacobus at 8:24 PM