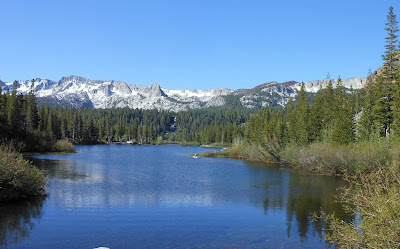 Twin Lakes
Day #577 * Hike #666 * New Track #569
Thursday June 14, 2012
Twin Lakes Campground - Inyo National Forest - Mammoth Lakes
My Tripometer: 1 Hour * 1.25 Miles * +25 Feet
Directions:
From the 395 on the back side of Yosemite, take the 203 into Mammoth.  We spent the night in a motel and then early in the morning continued east.  The main road turns right but we remained straight on Lake Mary Road.  Follow this up and around for a few miles.  You will pass under a bridge which supports a ski lift, Ayden thought that was pretty cool.  Shortly thereafter Twin Lakes will be on the right. 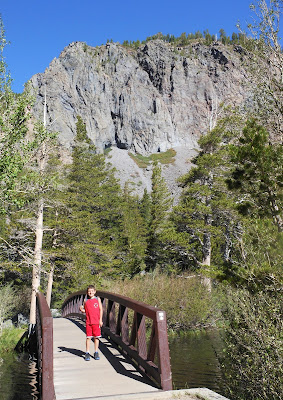 The bridge bisects the Twin Lakes 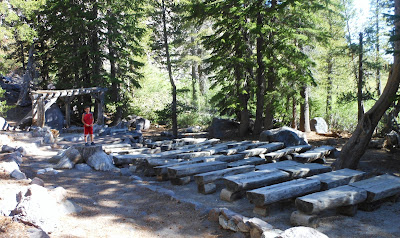 Some sort of performing area in the woods? 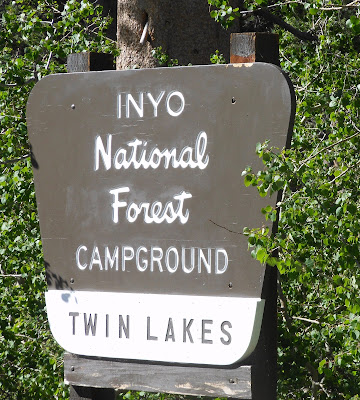 The trail did not appear to wrap around the lake so we were forced back across the bridge.  We passed Tamarack Lodge and it turns out that we were in a campground.  We walked alongside the second lake and spotted another bridge. 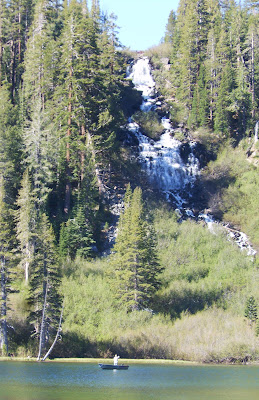 Waterfall at the end of the lake
We crossed the bridge and it entered a campground.  It was early in the morning and I did not really have plans to check out the Mammoth Lakes area, but since I was here...
This area is nice but I don't think I'd want to make Twin Lakes my destination.  I imagine that it's quite busy on the weekends and summer months.  The lake is small but if your looking to take it real easy then, why not.  Our day will continue...
Return to CaliHike.blogspot.com HOME PAGE
Posted by Jeremy Jacobus at 9:52 PM