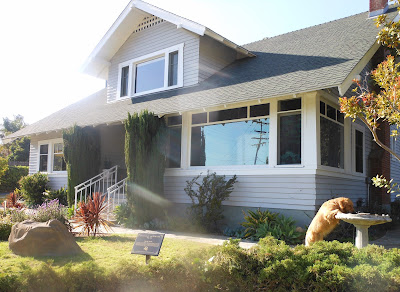 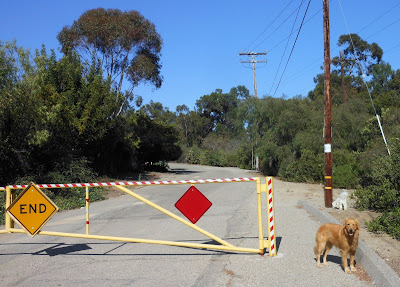 Trailhead - but not really...
Directions:
From Downtown Ventura, take Poli to the east.  At the large intersection with Seaward in front of Ventura High Shool, turn left onto Hall Canyon.  Drive up about 1000 feet to the end and park. 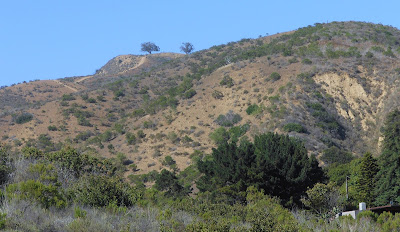 Another way to reach Two Trees? 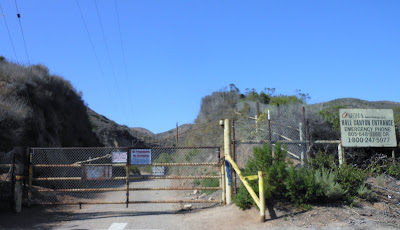 Nope!  Hall Canyon was on lock down!
Along the way, the smell of gas was very overwhelming.  You can actually hear the gas traveling through the pipes.  I wouldn't suggest lighting a cigarette back here.  That said, I saw butts on the ground. 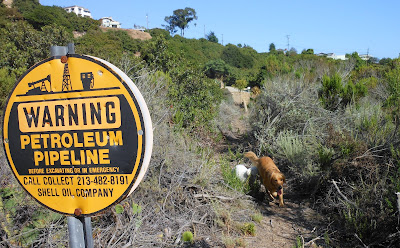 Found a single track trail - turned out to be a dud 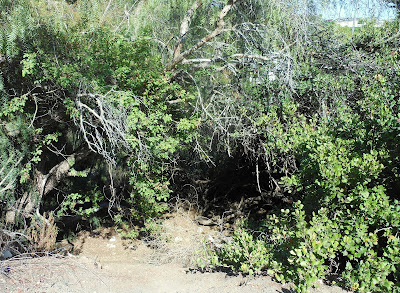 Wandering back, found a homeless hideout, it went nowhere 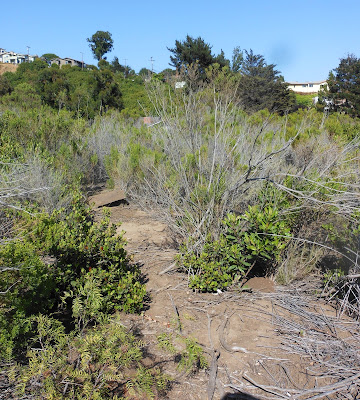 Climbed a little hill and trekked through this 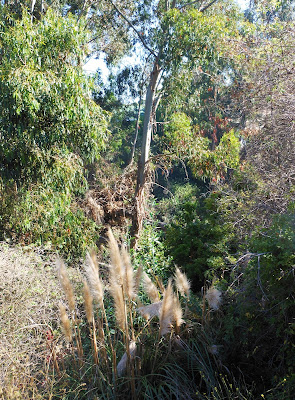 Many scratches later - dead end
I was turned onto Hall Canyon by my neighbor.  I told him how I hiked to the 'V' last weekend and he shared stories of how he hiked to Sulphur Mountain Road from Hall Canyon many many years ago.  I suppose I could have jumped the Hall Canyon fence but it was gated like a fortress so searched for something else to do.  --The things I do just to come up with a New Track!
All the way back at the car, my total hiking mileage was under a mile but all wasn't lost.  Looking down the hillside, I found this: 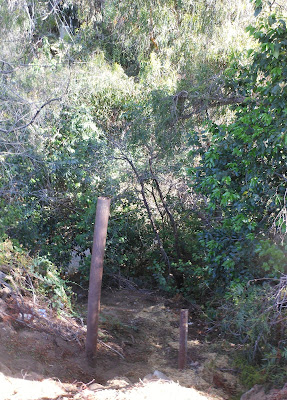 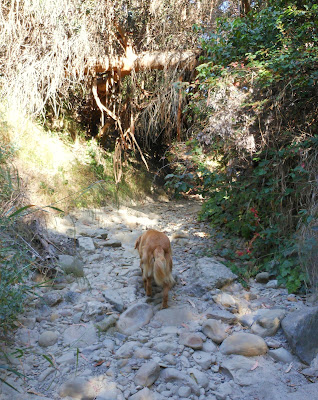 ...Leads to a dry creek bed
**This is not going to be a recommended hike.  The downhill is at a 45 degree grade which makes it quite dangerouse.  The four wheeled legged dogs were even sliding but I made it with ease.  At the bottom, we went left to head back into Hall Canyon... 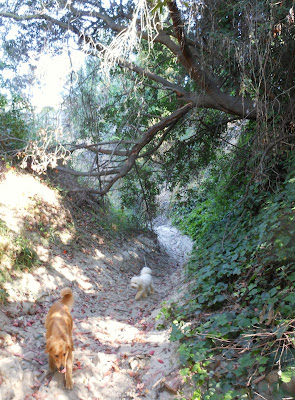 A little overgrown in spots but overall, not bad! 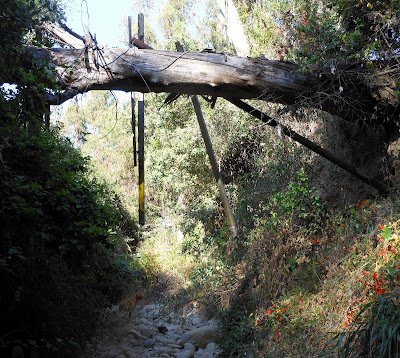 Hiking under the pipelines 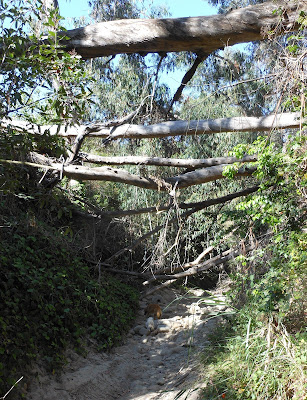 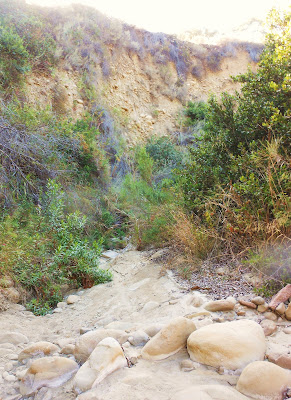 Nearing the end...
There were a few obstacles reaching this point but around this bend, the thick was too thick.  Maybe if I wasn't wearing shorts and if I had a machete, maybe I would have continued.  So, I turned all the way back, passed the steep hill and reached the end of the creek: 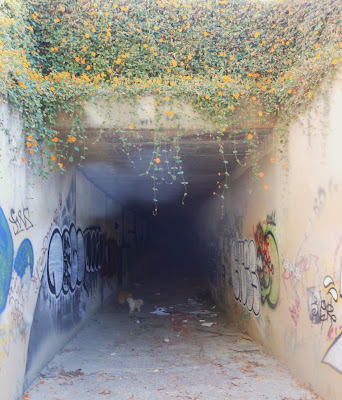 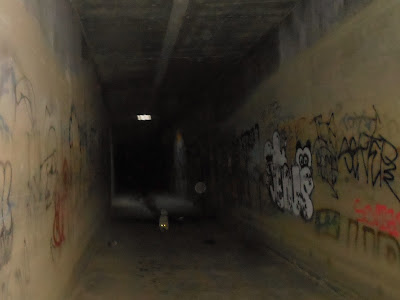 Traveled through the dark to reach this light
It was so dark that I walked completely blindly.  I often snapped a picture and looked at the camera image to determine my footing.  There was one puddle of water that I had to step over but other than that, the footing was good.  I suppose I could have gone further but without a flashlight, I really had no desire. 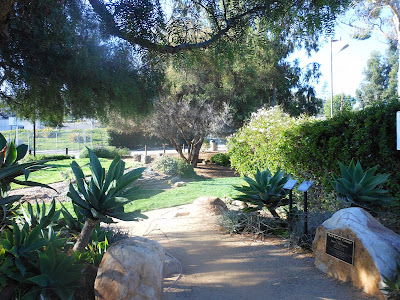 McWherter Corner
Climbing the hill above the tunnel brings you out to this area.  Along Hall Canyon, we walked back to the car and passed the Erburu House along the way... 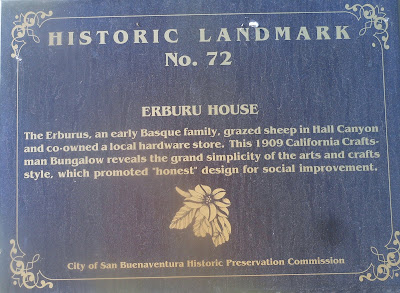 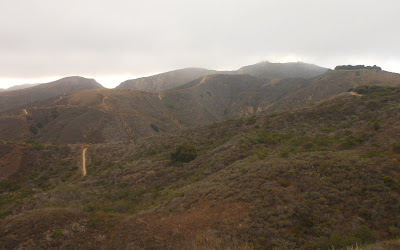 Cloudy Day at the Verde 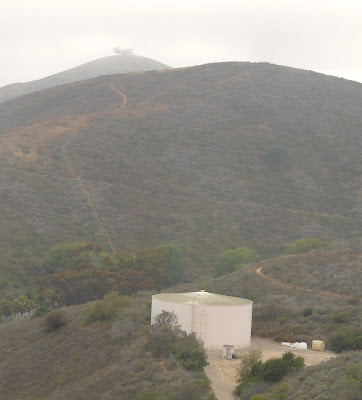 Two Trees in the clouds 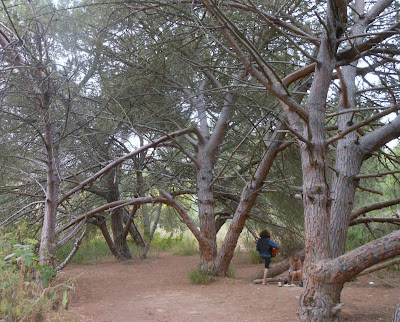