University of California, Irvine - The Reincarnation of Quartz Hill! 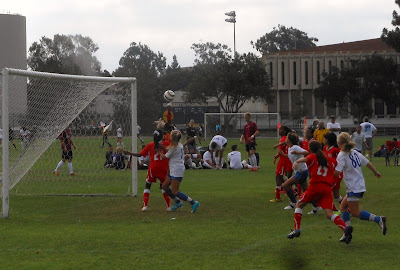 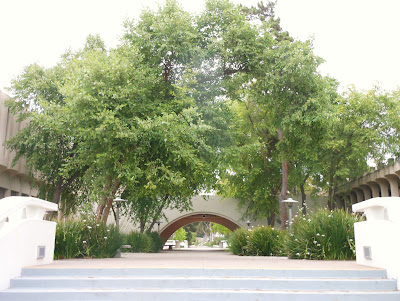 a walk about through the campus 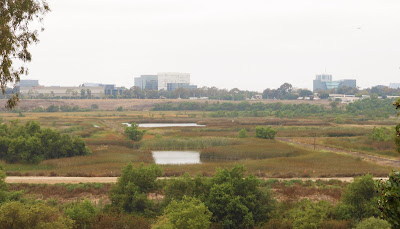 Overlooking Duck Ponds and Irvine from the far corners of the field
We arrived early for the soccer game so I took the opportunity to warm up my legs around the campus.  8:00am -- Game Time   **Tournament Semi Finals**

The Camaraillo Eagles controlled the ball early in the first half.  In the fifth minute of the game, Alyssa headed the ball into the goal!  This was huge.  It was Alyssa's first goal since returning from her injury!

With restored confidence, later that half Alyssa dribbled the ball down the ride sideline as she has done so many times.  Possibly the fastest sprinter on the field, she did not lose a step controlling the ball.  With a leg in front of the defender, in stride Alyssa shot the ball and it sailed to the opposite corner for the GOAL!!!

At halftime Jess said to me that the red team looked awfully familiar.  Sure enough, a man from the opposing team approached us and asked if that little blond used to play for the Vipers.  Huh, well, yes, you bet she did.  Come to find out that this red team is a brand new club team from Antelope Valley.  The majority of the squad stared on the undefeated Quartz Hill team from last season.  Well, undefeated until Alyssa scored two goals in the Championship Game to help lead the Vipers 2-0 past them!

Of course, the Vipers met back up with Quartz Hill in the State Cup.  This is where Alyssa broke her arm.  To be exact, #21, the redwood tree sized girl in the picture above was the one who kicked Alyssa in the back of her foot because she couldn't find the ball.  Today was no different with this girl.  Anytime a ball came around her she simply kicked the ball out of bounce - no skill.

The final score of the game was 4-0.  What a coincidence, how very strange to see Quartz Hill again.  Good job to Alyssa for scoring her first and second goal!  What a satisfying feeling to do this against her former rivals!  ==Championship Game at 3:30.  Check back, but first, check out my next crazy hike...
Posted by Jeremy Jacobus at 10:10 PM