The search for my first Geocache continues.  I logged on to http://www.geocaching.com/ and began searching for a Peanut Butter jar.  The title of this cache was Mountain Lion Lunch Break, or something close to that.  I plugged in the coordinates on Google, memorized the location and then began my search.

I hiked down from my backyard to just above the park where the cache was supposedly hidden in some bamboo.  I found the bamboo off the trail but after ten minutes of searching, no cache!  Ugh!!

**Later that day, I drove with my wife and some kids to Juanamaria Park.  Using the GPS on her smart phone, we determined that there should be a cache hidden just behind this sign: 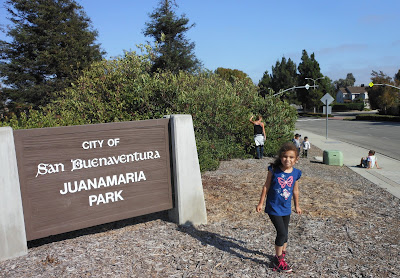 **I did not add this visit to Juana Maria as a Hike because I trekked less than a mile total (in case you were wondering).  With all the kids, we searched for a good 20 minutes and then finally found it! 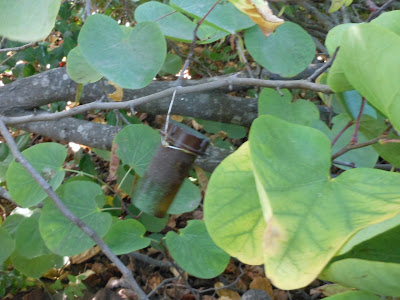 Geocache found in a camo pill bottle!
To reach the cache, walk around the bushes facing the park and look hard.  It's in the last small tree to the north before the bushy shrubs.  I found the cache near the ground but replaced it at four feet in height because that's what the original description said.  What's inside you might ask?  Well, just a piece of paper for you to sign.
My wife said, "We're never doing this again.  It's stupid!"  I commend her for putting up with me today because I was stressing from morning to late afternoon in search for a cache.  When we finally found one, it would have been nice to actually discover treasure.
Hey, I get it.  It's fun just to find things.  It's an accomplishment and I was truly excited when I found it.  However, it did lack the luster that I was hoping for.  If you follow my blog regularly, you may recall that I used to hide "Seal Treasures".  This was in conjunction with my SEALthe Beach campaign last year.  I never did attract much of a following for it so I stopped hiding them altogether.  However, I have no come up with a new, promising concept.  Why not hide REAL MONEY in these caches?!
Check out the game that I have created and play along.  Even if you read this from outside Cali, there's a part for you too.  Click on: PLAY the CASH CACHE Adventure!
Good Luck!
Posted by Jeremy Jacobus at 7:11 PM