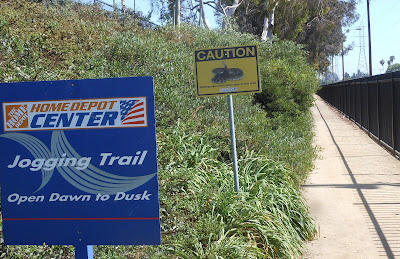 Home Depot Center Jogging Trail
It was Father's Day and part of Alyssa's B-Day present was the L.A. Galaxy Game today.  To save on the $15.00 parking and horrible traffic jam inside after the game, we parked down by the shopping center a half mile from the stadium.

The Jogging Trail as seen above wraps around the entire complex.  If I had to guess it looks to be at least a mile in length.  There are exercise bars along the trail if you are interested in cross training.  We actually walked along the dirt sidewalk on the otherside of the fence.  Along with circling the stadium and jogging back to the car, we easily trekked 2 miles on this adventure. 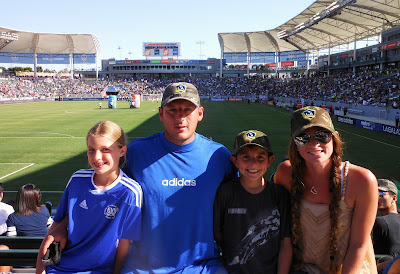 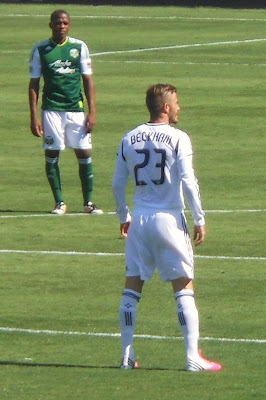 SilverHonors: David Beckham
All of these photos will be shared on David Beckham's profile page at http://www.silverhonors.com/.  Check it out and if you think he's deserving, VOTE for him...
﻿ 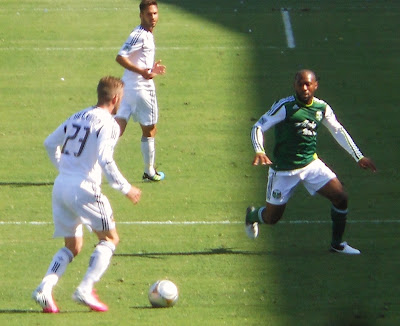 Day #579 * Hike #675 * Duplicate Track
Saturday June 16, 2012
Pleasant Valley Fields - Camarillo, CA
Alyssa's Return and Last Game for the Ventura Mighty Vipers
My Tripometer:  3 Hours * 2 Miles * +25 Feet
It was my first day back from Yosemite and we spent a good part of it at the soccer field where Alyssa made her return to Soccer.  Before the game I jogged the round mile around the oval and accumulated an easy additional mile for the record.
Alyssa did not actually show up until the second half.  The team was already down but immediately her impact was noticed.  It was her first game back since breaking her arm.  It was evident that she played cautiously.  At the point of collision, she pulled up versus pounding through.  She did not score a goal in this contest but she pulled off some nifty moves and aided with an assist.
The Vipers lost this game which meant they would not place in this tournament.  We returned to the soccer field on Sunday morning before the Galaxy Game.  The Vipers played their final game as a unit.  In the final minute of the game, the opposing team scored a goal and the game ended in a tie.
The Ventura Mighty Vipers had an Amazing Run!  They won the State Cup in California and it's sad that their legacy had to end here.  The girls have been split up into four different teams.  Coach Matt has created a new Viper Team with many of the same girls.  They will be competing at the club level in the bronze division.  Alyssa is on the Camarillo Eagles in the Gold Division and their team is nationally ranked.
The AYSO decision to break the Vipers up was appauling.  For them to not include Alyssa on the team because she broke her arm and could not try out is just outrageous!  She risked everything for playing with the Vipers even though she won a scholarship for the Eagles.  The worst case scenario did happen, she broke her arm!  --I wrote more about this in my book, 1000 Hikes 1000 Days OFF TRAIL
Posted by Jeremy Jacobus at 8:39 AM