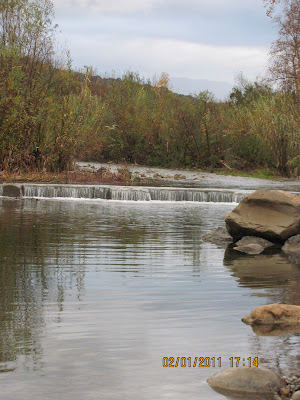 Ventura River
After cold but clear weather on Friday and Saturday, Sunday was met with all day rain.  After taking the day to install a tv and two light fixtures, I figured it was time to hike somewhere before dark.  Before I reached Foster Park, I attempted School Canyon Road.  Hmm, I don't think I was supposed to be there.  Passing an empty guard gate was the first sign and then numerous additional signs with pictures of security camera's gave me an unsettling mood.  I continued driving slowly without music, as usual, but it was dead silent.  I came upon oil wells and then a huge station and then more windy hills and I just kept going!  I drove higher and further and nothing but oil and sounds of oil rushing down the pipes I'm driving next to.  The area was completely dead.  It was a Sunday evening in the rain.  My intent was to go beyond all the oil and then hike beyond that but finally, I said no.  I took some pictures and got the hell out of there.  I imagine that this place is buzzing with workers during the week.  It was a beautiful landscape with awesome views of the ocean, but it was not meant for me, it is not meant for the public.  Word of advice, STAY OUT.  --I'll post some pictures on Facebook.
Hmm, what to do next?  I drove up the road and then down Canada Larga to the end.  Nothing but awesome fields and cows.  I remembered this place because when I first moved to Cali, my then girlfriend, now wife Jessi, drove me down here.  I thought there was a place to hike but clearly, this was all private property.  Basically, this is the next valley over from the oil mountain.  Again, pictures will be on facebook.
Finally, I found a public spot, Foster Park.  Not much time left, so I ran up and came back down.  The river was full so creek hiking was difficult, but I did scope out the entire immediate area.  In the future, I will be back to hike more of the creek with my kids.  In addition, the road continues on the other side to Lake Casitas.  All in Ventura County; it's beautiful!
Posted by Jeremy Jacobus at 7:47 PM