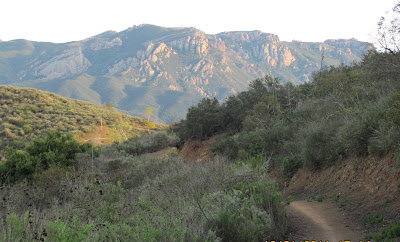 This is a great Mountain Bike Trail and it's even better for running!  The hills are very gradual but the elevation does accumulate.  My legs welcomed the push but I still ran gingerly in fear that my ankles could snap.
Today I studied this area via Google Maps and the Dos Vientos Map page.  I decided to draw my own map of the area since I was unable to find one anywhere.  As I passed each junction, I felt like I had already been here.  There are no signs so you just kinda have to know which way to go.  It actually was quite simple; follow your instincts on the main trail and you will make your way to the end.
The trail closely followed the house line below.  It never really climbed up over the top.  Other than nice houses and cool views of the valley below, the scenery wasn't really that great, until I saw Boney (the picture above).  She keeps reminding me on all these side trails that I am meant to conquer her.  I think I'm waiting for the 100 degree day to take her out!
The temperature was around 70 degrees when I set off; the warmest it's been in over a month.  The trail awoke right after I took the picture of Boney.  I was less than a minute jog to the end and in astonishment, I gasped, "oh my!" 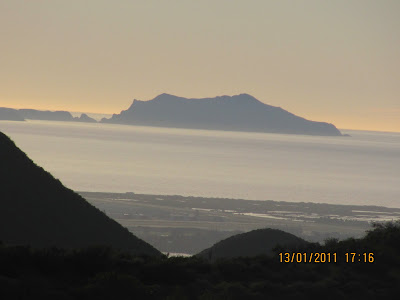 Anacapa from Dos Vientos!
I mean, wow!  The crazy thing about it is, the local residents driving down the roads and from their homes cannot see the ocean or the islands!  I was less than 100 feet up from the intersection of Rancho Dos Vientos & Via El Cerro.  It's nearly sun down and I did not pass one other person on this trail today!  This makes no sense; where are you people???  If that wasn't enough, after I ran down, tagged the street and ran back up, I noticed: 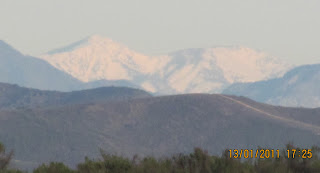 Mt. Baldy
Also known as Mt. San Antonio, I climbed this beast about 18 months ago.  Of course, I hiked it in the summer time so there was no snow.  At 10k feet, this is the real deal.  I'll be rounding up the troops at some point to defeat her again!
After I took it all in, I dashed back down the trail.  Near the end, rather than take the same route, I turned off the trail to the right.  I climbed to the upper house line and then negotiated my way to a broken down trail.  This lead me out to Las Brisas.  I passed a sign that said, "no trail", oops.  But there was another trailhead down there so I flipped back and made yet another climb.  I was on the Via Vis Trail.  So there it is, I basically completed that trail so I can cross that one off my check list.  It funneled back into the Mid Dos Vientos Trail, and finally I was back at the car.  All this in under an hour.  I guess I ran faster than I thought!  I'm going to finish the map and publish it to the blog so others can relax and follow an actual map.  Give me a few days.  Your welcome...

Posted by Jeremy Jacobus at 8:55 PM