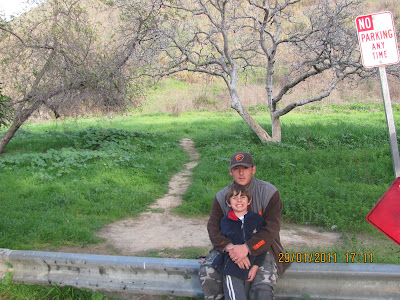 In Ventura, The Avenue area is known for poverty and drugs.  This ought to be the nicest area in town because it is situated between the Ventura River and a small mountain just minutes from the ocean.  Instead, a freeway was built next to the river and the homes are all on top of each other.  We passed by what used to be a single family house but it now has five different front doors and addresses under the same roof.  Much of the area is fenced off as industrial and it continues down all the way to School Canyon Road, which I tried hiking on Day 49 http://calihike.blogspot.com/2011/01/day-49-foster-park.html.  This mountain turned out to be an endless system of oil wells and pipe systems.
We had a birthday party to go to early in the day and then the day began to drag on.  Jess agreed to pack up Ayden in the car and aid me on a hike.  I wasn't feeling good at all today but I knew I had to do something.  With a slight fever, stubborn headache, cold sweats and dehydrated mouth, we set forth toward Ojai.  Instead of taking the additional 20 minute drive up the 33, my wife told me about the trail behind the houses off the Avenue.  I didn't really believe her but since she was driving, what are you going to do.  Indeed, there was a trail?!  As soon as we set foot on that trail, she began to reminisce.  Growing up, she lived in this area and often walked this route.  From the end of Lewis Road, we turned left. 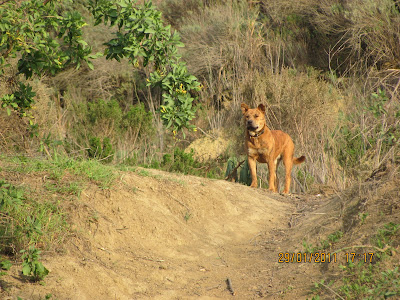 This dog was on a trail above us standing like a statue.  We kept going and then the dog ran down the hill and went the other way.  The flat lower trail turned slightly upward and into the ruff.  It was pretty creepy in here. 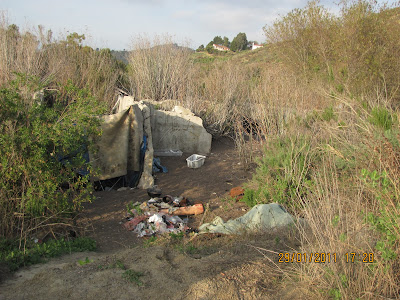 No doubt this was someone's home.  In fact, I believe they were asleep in that green blanket.  We kept walking past and the area opened up to a graffiti ridden jungle.  We saw other self made shelters and cable wires running up a hill.  I imagined that somehow these folks had cable tv out here? 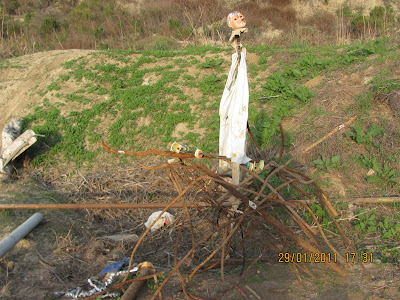 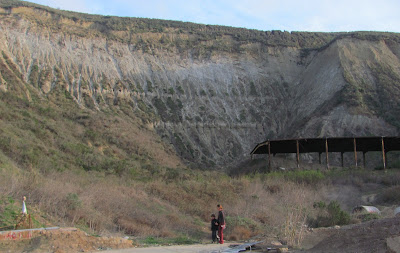 Hoover Dam?  No, just the mountain rock with some strange taboo statue made out of sticks and the head of a doll, Chuckie from Child's Play.  It looked like this area was also used as a skate park for the outlandish child.  The actual skate park is not too far from here.  Anyhow, we continued to a higher trail and reached the top of the area.  There was a fair ocean view but today was hazy.  There was a dirt bike track up here with mild jumps.  I took some pictures of all of it, but will save it for my January video.
We hiked back down and I had the brilliant idea of hiking along the middle trail (where the dog came from).  This is also where the cable was running up to.  On our left tucked away in the brush were several tents.  Peaking ahead, I could see more but then a dog began to bark.  We stopped, my wife turned around and said NO!  The voice of reason escorted me back down the original path.
This trail worked its way to Deanza park.  I played in a softball league last year and played one game there.  The park is part of a school and is kept in pretty good shape, considering the neighborhood.  We walked back toward our car but instead of stopping, we kept on the trail to see where it went. 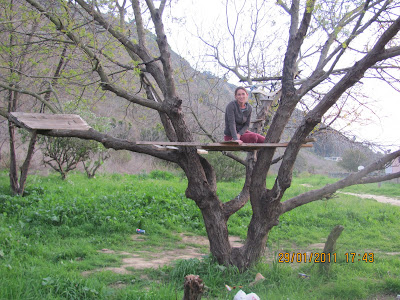 Why not, a tree house!  Notice the bushes in the near distance.  When we continued down the trail we noticed a few kids in this oasis tweaking and sipping on a Four Loco.  Their experience sums up what life is like for an eight year old growing up on The Avenue.  The trail eventually ended on the turn from Cedar St. into Kellogg.  Kellogg ends on the Avenue and becomes Cedar Street on this turn.  If you head up Cedar street, it will turn into Poli just above Downtown Ventura.  As Poli makes its way to the east end of Ventura, it becomes Foothill. 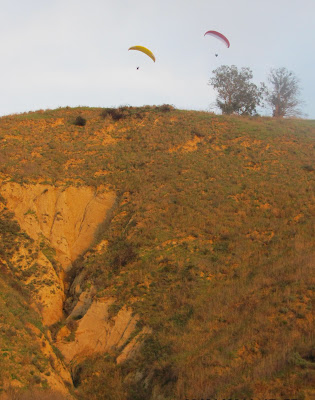 Before we walked back to the car, we saw four motorized gliders flying over top of us.  The area up there is known as The Cross, which I hiked on Day 38 http://calihike.blogspot.com/2010/12/day-38-serra-cross-park.html.  So, this completes Day 76.  I hiked this area so you don't have to.