DAY 72: BACKBONE TRAIL-ZUMA RIDGE/PRIVATE LAND
Miles: 4.5
Elevation Gain:  775 Feet
Time: 1.25 Hours
Difficulty (1-10): 2.0
Reward (1-10): 3.5
Description: Hmm, where do I go?
Where: Zuma/Trancas Canyons, CA
Directions: From the 101 Freeway in Westlake Village, exit at Westlake Blvd (the 23) and head south.  After Potrero Road drive very carefully as the road makes crazy turns and is narrow.  This made me somewhat nauseous today.  After about 10 minutes, turn left on Mullholland Hwy East.  A few minutes later you will make a sharp right on Encinal.  You'll pass a park on your right and then immediately park on the left.
**MY 72 DAY SUMMARY:  251.75 Miles  +38,875 Feet** 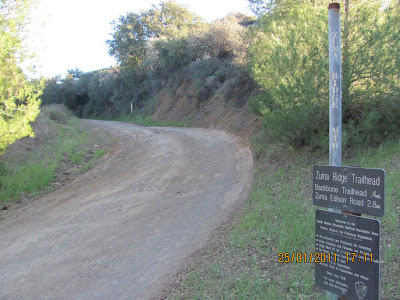 The Trailhead
http://venturacountytrails.org/TrailMaps/Backbone-Kanan-Zuma/AreaTrails.htm
There is a more obvious sign seen from the road "Buzzards Roost".  The link I provided I discovered after I actually hiked this area.  Check out the #2 profile and follow it East to West and then back East as I did.  The gate was open on the dirt road also known as the Zuma Ridge Trail, but you are not permitted to drive up there.  If you cannot find a fair spot not blocking the driveway, continue up Encinal road 500 feet and there is a wider place to park.
Begin walking the 0.4 miles up the road.  You'll pass the Backbone Trail entrance on the left that I completed from Kanan Road on Day 61: http://calihike.blogspot.com/2011/01/day-61-backbone-trail-to-zuma-falls.html
Continue hiking up the road for a moment and then on the right you will see: 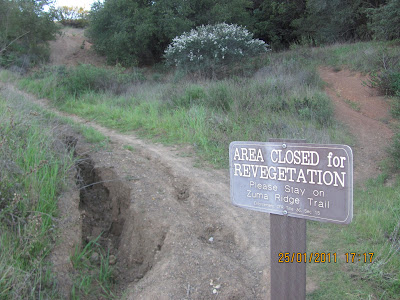 After further research, I realized that this trail was private land.  At the time, maybe I assumed this trail was Zuma Ridge, but I know it should have been the next section of the Backbone Trail.  Just a few moments ago, I was doing some intense research of this area and it appears that there are some proposed trails in the works (officially) but today, I hiked this route.
After tiptoeing up for a sec, the trail showed signs of bike tracks, footsteps and dog doo.  It was going the right way and began heading down, so I continued and began my jog.  About a half mile in, I reached a dirt road.  Rather than swerve lower to the left I took the flat road that essentially went straight.  Less than a minute jog later I intersected another single track trail.  The road continued but from the sign facing the other direction, the proper way to hike this area is to come in from this road up top and then turn onto the single track trail.  I felt better and the trail was inviting.  This was the backbone for sure.
I continued my push downhill and then the real downhill began.  I wasn't sure how far it went but when I rounded the next turn, I heard the rush of water, saw out over the ocean and yeah, I was in a cool spot.  I ran down the hill and at the bottom: 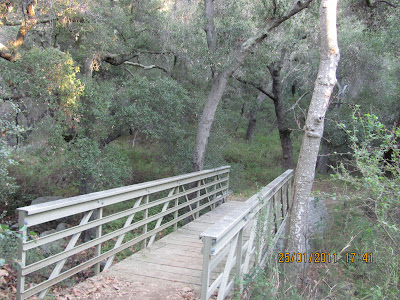 The water beneath the bridge was shallow but the trail turned and likely led to a waterfall.  I really wanted to keep going, but the daylight was running out so I had to go back. 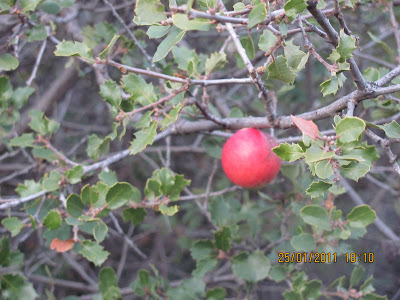 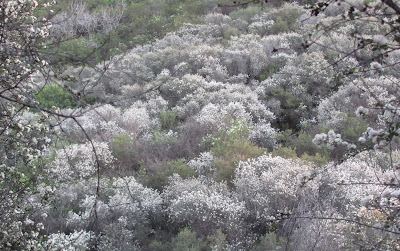 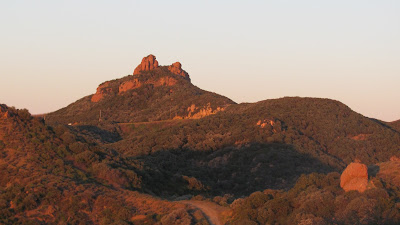 Another day, another adventure.  Until tomorrow, I'm out :)
Posted by Jeremy Jacobus at 8:20 PM