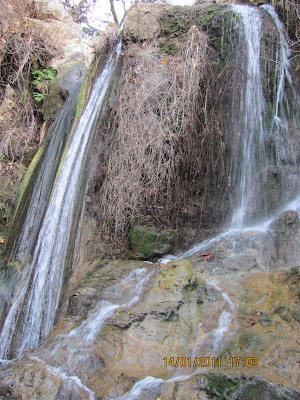 Newton Canyon Falls
I hiked from this trailhead on Day 18:
http://calihike.blogspot.com/2010/12/day-18-backbone-trail-from-kanan-to.html
Record Setting:  I just climbed higher than Manu Kea, a mountain in Hawaii.  The mountain actually begins in the ocean and surges 33,480 feet from it's base.  Manu Kea only stands 13,796 feet above sea level, but technically it's the highest mountain on Earth!

If this parking lot is full, there is an overflow parking lot just before this one.  There is also another outlet to the trail back there.  After a minute or so of hiking from the main trailhead, there is an alternate trail that goes lower.  There is a bent over sign that reads "backbone trail", with an arrow pointing to stay on the main trail.  However, if you hike down this alternate trail for a moment, you will notice the waterfalls.  Keep going lower and you can soak your feet in if you wish.  The trail is somewhat steep, but if I could do it...
For the record, these falls and alternate trail are not marked on the Zuma/Trancas Canyons Trail Map.  I then began my running pursuit to the Zuma Falls.  The trail parallels Kanan for a few minutes but then it turns into the canyon.  As soon as the noise from the traffic silents, the rush of the water below amplifies.  The trail is well groomed and shaded.  The thick shrub on the left makes it impossible to know what's really going on down there, but you must assume there are more small waterfalls.  Finally, the trail lowers to the level of the water and a bridge allows your passage across.  I noticed that the water was running back toward the waterfalls.  So, there must be an underground river floating this water to the ocean or the waters meet and then go somewhere else? 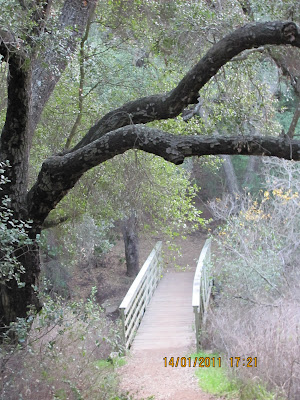 I snapped a few more shots and then I continued running.  The river began to calm and the drone of local frogs echoed my ears.  Again, the marshy brush was too thick to see anything, but the ecosystem changed to a reptiles life.  I kept running and rounded many turns.  The hills were not too insane so I kept a decent pace thru them.  I occasionally slowed to sip my water and take pictures.  In the distance, i noticed: 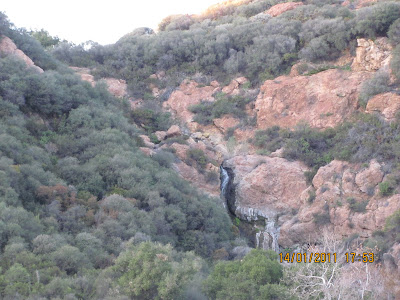 Zuma Falls
I know this because it's listed on the map.  I thought I took a better picture closer up, but that came out blurry!  The was a side trail that dipped into the marsh and it looked like it would lead you right up to the falls.  I thought about checking it out, but I still hadn't reached my turnaround point...
After another five minute run up a steep final incline, I reached the Zuma Ridge Trail.  This is a fire road and a sign said Encinal Road was 0.3 miles down and Bush Road was 5+ miles up.  I'll look into it for another adventure.
I quickly turned around and raced back to the car.  --Just when you think you're done!!!  I jumped on my motorcycle and headed toward the ocean at dusk.  I thought it would be shorter to take the PCH vs the 101 going home.  In theory, I was probably right because I was pretty close to the ocean.  Problem is, the WIND!  My ride was horrible.  Half the time I was riding at a 20 degree angle fighting the wind.  When I approached Mugu Rock, forget about it!  It reminded me of Cory on Jaime Gordon's scooter out of control.  Of course, Cory fell and I did not, but I did do some crazy swerve action and it scared me crazy!  Then, the PCH began to snow, well maybe that was sand flying in all directions.  Now I understand why this road had been closed for several weeks after the nasty rains.  The earth is mad here!  This part of the PCH was opened up with dynamite many years ago.  The mountain is meant to meet the ocean and a road was not meant to cut thru it.  But it does and I do relish it.  I WAS BLOWN ALL OVER THE PLACE.  I was thinking "when I fall" not if; but I didn't.  I made it home safely, so there will be a Day 62!
Posted by Jeremy Jacobus at 9:23 PM