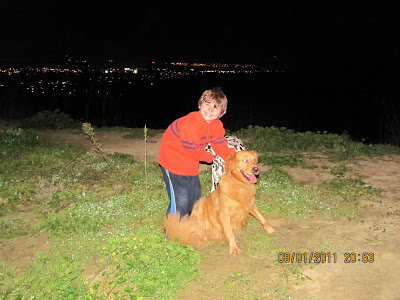 Yesterday was a LONG day in Hollywood.  Jess and I intended to participate on the Let's Make A Deal game show for the 1:00 taping, but we arrived at 10:15 and missed the cut.  So, we stuck around and went back at 11:45 to appear on the 3:00 taping.  This ruined our plans to climb the infamous Runyon Canyon in Hollywood.  We still drove to the trailhead but we'll have to save that adventure for another day.
Well, no luck on the game show :(, this time...  Last time we appeared, my wife won a trip to New Zealand.  This time, nada; except a parting prize that the entire audience won.  It was still a cool, but long experience.  I had no chance to be picked.  Out of 300 hopefuls in the audience, only one dude was picked and the rest were females.  I'll put a picture of our costumes on Facebook...
So, we didn't make it back to Ventura until very late.  I decided to take my son and dogs for a night hike.  Just beyond our neighborhood, there is a gate that leads to Arroyo Verde Park.  We hiked the upper portion of that and followed it out to a lower gate.  We then trekked down the street to lengthen our hike and instead of just coming back up, we tiptoed our way along the narrow barrancas between the houses.  The barranca closest to my house is fenced off but the lower one run all the way thru.  It was dark and my son was scared.  When we made it beyond the house line, the barranca turned into a dark field.  He started crying, "that's where the cows are!"  After that, we called it a night...
Posted by Jeremy Jacobus at 8:14 AM