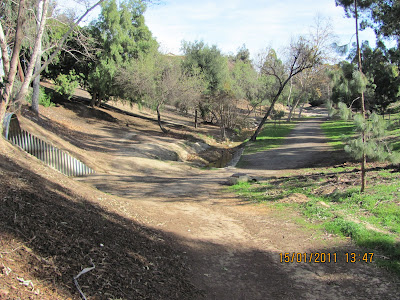 Mission Verde Park
For the next three weekends, Alyssa will be competing in a soccer tournament held in Camarillo.  With two key assists, her all-star team, The Orange Strikers, won their first game over a San Marcos squad by a score of 3 to 2.  There was a 3 hour break before the second game, so we went to Mission Oaks Park.  While the wife and kids played on the playground, I trotted off beyond the tennis courts and found a tunnel.  The other side of the tunnel is known as Mission Verde Park.  To my surprise, there was a trail for me to run.  With several options, I turned left out of the tunnel and ran along the main, flat trail to the right of the barranca.  At the end of the first straight away, the trail goes up and over to the right.  This is what you see: 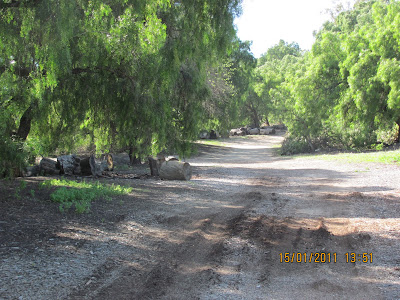 Just keep jogging.  There will be options to take a cement runoff trail up to the house line, but I dipped down to a grassy field: 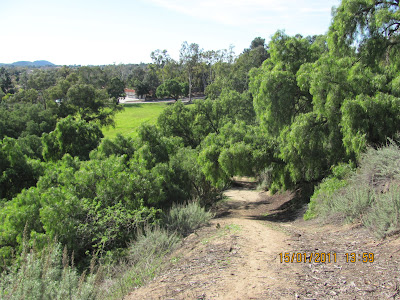 I continued right around the empty grass field and eventually rejoined at a higher elevation.  I kept trucking around the next turn and the trail became a cement runoff.  Then, out of nowhere, it just ended!  I skedaddled lower fifteen feet and began jogging along the sidewalk along Woodcreek.  I turned right on Elmview, the first street.  I then turned right on the next street (Willow View) and continued pacing through the neighborhood.  I passed a street or two and out of instinct, I turned right on Mulberry Ridge.  The street turned to the left and shortly thereafter, I found an entrance back to the trail area.  I had just been up here so I turned left and ran along the cement water runoff to consider this mission as "a loop".  Eventually, I found a decline that brought me right back to the tunnel.  I went back thru and then ran straight.  There was an outlet to the left, but I didn't explore that region.  To the right was the tennis courts so I kept pushing forward.  I passed the softball fields and finally rejoined normal society.  My wife and kids were at the playground: 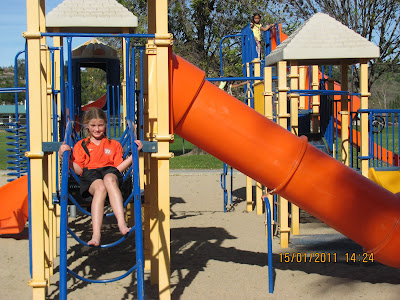 This ended up working out great.  I'm not always going to be able to hike the most extravagant trails but I find like this was completely random and perfect for the entire family.  By the way, Alyssa won her later game 4-2 over Santa Barbara.  She scored two goals and had one assist.  Her team is definitely the underdog in this tournament, but with a 2-0 start, the girls will be going into tomorrow with a bode of confidence.  Speaking of which, we need to meet up in Camarillo at 6:45am.  The alarm is set for 5:30am... GOODNIGHT!

Posted by Jeremy Jacobus at 7:20 PM