DAY 54: SIERRA VISTA TRAIL
Miles: 3.0
Elevation Gain:  600 Feet
Time: 45 Minutes
Difficulty (1-10): 2
Reward (1-10): 1
Description: Between the neighborhoods, why run the streets when you can do this?
Where?: Newbury Park, CA
Directions:From the 101 Freeway in Thousand Oaks, exit Lynn and head South to Southwest.  You will pass several lights (several miles).  The trailhead is on the corner of Via Las Brisas and Lynn (on the right side of Lynn).  Since there is no parking on either street, turn left at that intersection and park.  That street is actually called Paseo De La Paz.
**MY 54 DAY SUMMARY:  191.75 Miles  +29,550 Feet** 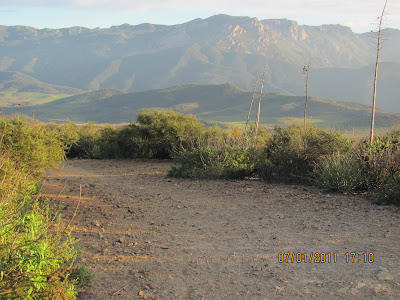 Boney Mountain in the distance.
I did it!  I climbed Mt. Everest; sort of.  It only took me 54 days to climb over 29k feet.  Now I have my sights on the moon :)
Today was actually pretty interesting.  Being that it was Friday and traffic from Thousand Oaks to Ventura along the 101 is nuts (I didn't have my bike), I decided to find a trail along the back way home, Potrero Road.  I didn't have enough daylight or will to conquer that nasty boney mountain in the picture, but on the residential side of the road, I found a cute little trail.  This can also be found on the Dos Vientos Map, trail #1: http://venturacountytrails.org/TrailMaps/DosVientos/AreaTrails.htm
The trail begins like a wide dirt covered bridal trail.  These are common along the main roads but as soon as you make the turn into the large hill, it becomes a normal rock dirt trail.  It's easy to follow but about 3 minutes into it, a decision must be made.  The trail goes left and right; I chose left.  As I continued to follow the trail up, the noise of a helicopter really distracted me.  It was flying over Mugu Rock and back towards the field area in the National Park area across the street from this trail.  I thought at first it was a fire but I later realized that smoke was actually fog and a low layer of clouds rolling in.  I will post some pics on Facebook and include the video for my January video.  By the way, I am almost done with my December video...
The hike became more interesting  because there was some strange man walking thru the thick brush with a walking stick, a strange bag and when he was out sight, he made some sort of metal clanging noise.  I picked up a rock, just in case.  I figured that if I was attacked, I would have one shot to throw him a fastball.  Back in the day, I could reach speeds of 90mph, but my accuracy was not dead on.  Anyhow, I eventually ran past him...
During the incline, you hit a road.  I continued moving straight (left on the road) and about 100 yards up on the left, the trail continues up and into the hill, so you never really cross the road.  I kept going up and then eventually went all the way down to Via El Cerro, a private road that intersects with Rancho Dos Vientos.  I turned around and climbed back up.  I passed that weird guy again and instead of following the same trail, there was an option to take a wide path on the left; so I took it. 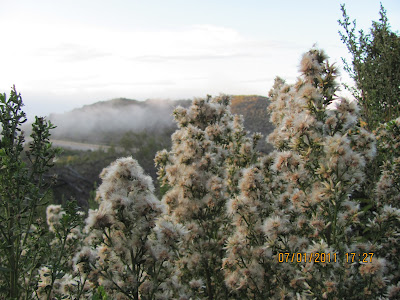 This lead me out to that same road.  A trail sign said to go right, but I went left because I had to start getting back.  I eventually came up to the main trail but I went past that to climb the road to the top.  Well, u-turn, the gate up there was locked so don't even bother.  I went back to the trail and headed back.  That's it!  --I will point out, there were several mountain bikers in the area so this trail is well traveled by the locals...
Posted by Jeremy Jacobus at 8:11 AM