We arrived at the soccer field at 6:45am.  The sun was still tired, yawning somewhere behind the grade.  It was a gentle clear morning but even with the temperature in the upper 50's, my body felt chilled wearing only shorts and a tee-shirt.

Fields: 1.25-mile run.  From the 101 freeway in , exit and the huge soccer park is right there.  The game didn't start until 8:00, so I went for a jog.  My starting point was the snack bar where there was a fine dirt trail.  I began a trot to warm up and then crossed the parking lot and up a gravel path.  The quarter mile stretch above the lot was rocky but I picked up my speed and body temperature.  At the end of the park, I rounded the turn, crossed the parking lot again and joined another dirt track.  Running the width of the soccer field, the trail ended and I went cross country style on the grass next to the fence.  I kept dashing and joined another fine dirt path and then back to the grass again.  On the final turn, I finally rejoined the original dirt trail and sprinted back to my soccer chair.  Maybe the entire oval was 1.25 miles....

Alyssa's squad faced off against .  The fear in the name was more gruesome than the game itself.  played with two forwards and four defensive backs in front of the goalie.  took a 1-0 lead in the first and held it until two minutes left in the game.  Alyssa found herself in front of the goal and diverted a pass off the side of her body into the goal.  The game ended with a 1-1 tie.

Model Airplane Field: I visited this area last month on Day 42, the day I lost my Ring! 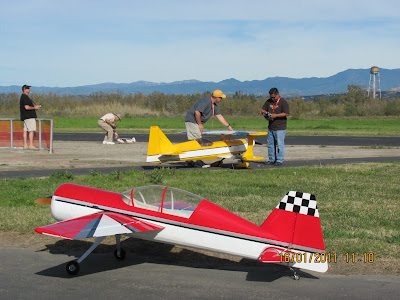 After the first game, we stayed in Camarillo and watched the airplanes fly!  Alyssa didn't go with us last time so it was a nice break for about an hour.  We had more time to waste so...

Mission Verde Park: I was here on Saturday: http://calihike.blogspot.com/2011/01/day-62-mission-verde-park.html 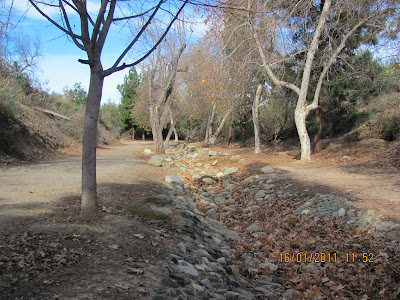 With an hour to spare, the wife and kids went back to play at the park while I set forth towards the tennis courts.  Instead of going thru the tunnel, I continued straight down the section that I did not explore yesterday.  The landscape was similar as I ran along the dry barranca.  Less than a quarter mile into it the trail essentially ended so I looped to the upper portion and ran back.  I then circled the outfield walls and ran the outer portion of the school.  This concluded my second run of the day.

vs. :  There are 3 Ventura All-Star Teams in the female U-10 division.  With all these teams in the tournament from different cities, why in the world are we playing ?  Not only that, the coach of this team is also the Coach for the Ventura Vipers.  Alyssa will be on The Vipers as soon as the All-Star season is complete.  Vipers are the top 9 player out of nearly 250 that played the regular season and Alyssa is the only Viper on her all-star team.  The team she is facing has four top Vipers and they were 3-0 heading into this game.

This team was intimidating.  Forget the scrimmage game that we had a few weeks back when they shut us out; their pregame chants were on point, in harmony and the parents clapped along with.  Then the game began.  Their speed, strategy, agility and perseverance were unmatched.  Spreading out the field and passing the ball reflected a diligent mature system of practice and teamwork.  Where our team seemed like a bunch of little girls all going for the ball, this team was well organized.  The reality check was finalized when the final whistle blew.  We had just lost 5-0!  The opposing girls displayed noble sportsmanship by forming a tunnel for our girls to run through.  They cheered for us, clapped and gave them all pats on their backs.  It’s unfortunate for Alyssa that she could not be a part of this experience.  For years she has been dominating the league scoring 10 goals a game at times.  But just as Lebron James could not win a championship in , Alyssa lacked the fundamental coach and skilled teammates.  A month from now, her pursuit to greatness will truly begin.  Until then, our team is still in contingent with a 2-1-1 record.  We have overachieved thus far and next week, these girls will play their hearts out.

Pier:  AKA Long Beach Pier: After the game, we drove back to to let the dogs out and change.  With time left in the day, we took the 90 minute drive down to to visit my sister.  After dinner, we took a short hike along the promenade by the Olympic Pool, which I believe was built for the 1984 Summer Olympics.  This is located in , but the promenade expands over three miles into .  We walked the cement pier and viewed the Queen Mary & a colorful .  It was dark and hard to see but my sister explains that there are several manmade islands drilling for oil.  To prevent an eyesore, these oil derricks are built with waterfalls and are lit up with colorful lights at night.  Along our walk back, some kids were lighting fire kites and releasing them into the night sky.  I heard about these but never saw one until now.  They must have been expert firekiters because the flames were well controlled and climbed thousands of feet into the night air until they burnt out.  At their highest point, they looked like the Planet Jupiter through a telescope.