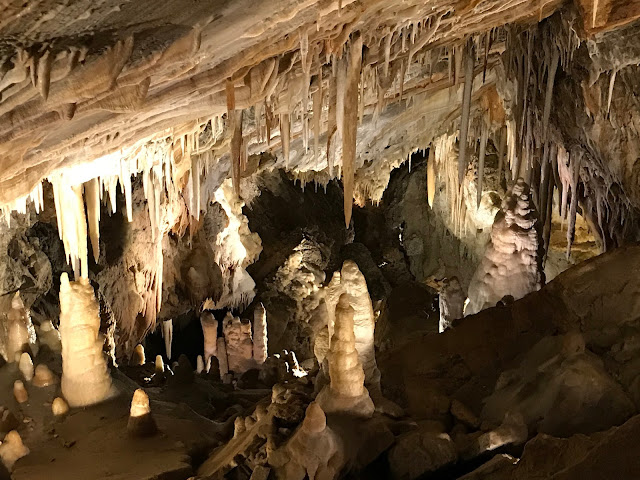 Nestled away along the I-70 Valley rests the small town of Glenwood Springs, Colorado.  Other than filling up the tank in Grand Junction, Glenwood imprinted my first step in this amazing state (not counting my two-year-old experience which I can't quite remember).

My Uncle Fred was right, get gas in Grand Junction - much cheaper, and indeed it was.  The drive along I-70 was simply beautiful.  Gorgeous reddish-green landscaped sloped both sides of these real mountains guiding us.  Along side, a river flowed.  I imagine our freeway was in fact the pathway for this  snow-melted highway.  The afternoon temperature of this July 2017 day was perfect; window cracked open in the RV.  Our destination and purpose for our trip was now understood with an exclamation mark!


Arriving at the near evening hour after a long haul across, the Caverns would be our day's even for tomorrow.  We were just in time to tuck away at the target parking lot, and then the rain came.  As we soon found out, Colorado likes to rain, pour and thunder in the late afternoons and evenings.  Growing up in Cleveland, the boom-booms were refreshing and slightly scary.  However, trying to explain the real thunder roar to a 13-year-old California boy was a bit challenging.  I remembered back to my youth, watching the movie Poltergeist, where I learned you could count the light and when the thunder strikes, that number represents approximately how many miles the lightning was.  Fortunately, most of our counts were double digits as the activity actually took place in the mountains above.  That said, there was that one or two nearbys that shook our house on wheels. 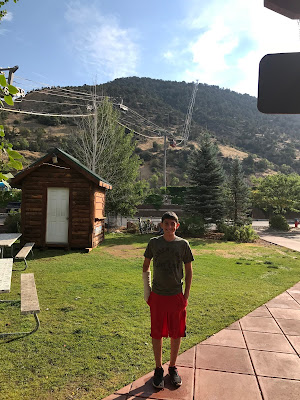 The amusement park is just up those cables at the top of the hill.  How strange and exciting, right?!  Ayden, as brave as he is, was slightly haunted by having to take the gondola up.  Further, his arm was only a week out of being broken, so most of the fun by the sun would have to set for this cadet.  Lol, I'm a poet now! 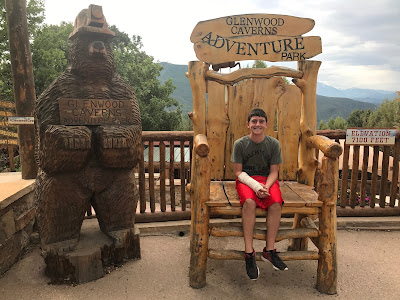 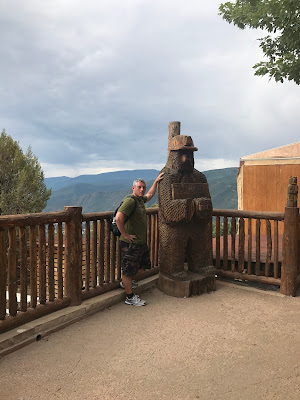 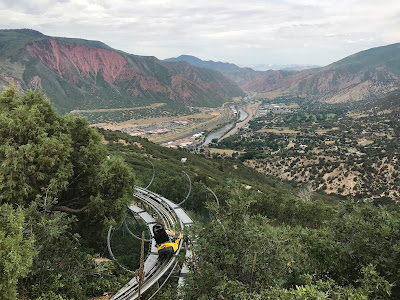 The Alpine Coaster pictured above would have been the one ride I would have actually been interested in, but Ayden could not participate.  He really couldn't do any of the rides.  The park is overall quite small, yet growing year by year they say.  We did ride the 4-D motion ride, four times for all four movies.  I typically do not like the motion sickness rides, such as those found at Universal.  But this one was fine, nothing more than a quick flick, slight shake and spit of water to moisten the aroma. 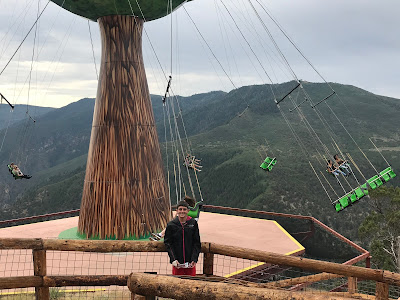 This is what Glenwood Caverns is really all about.  Two separate caves were discovered up here.  We took both tours and they were quite educational.  The explanation of how they originally squeezed their way through the passage was incredible.  Surely I may be able to do this at the end of my Fat To Fit journey, but my prior Fat before Fit, not a chance. 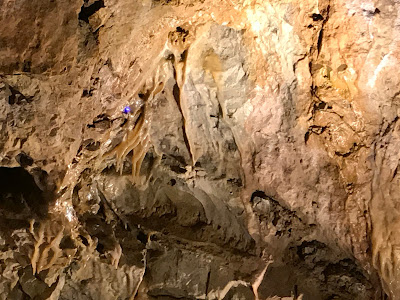 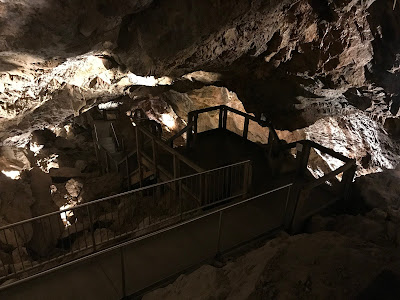 Since then, they have made the openings much easier.  The staff takes great pride in these caves and the guard it religiously - do not touch or misstep.  They do offer private tours as well where you can dive deep into the dark and below. 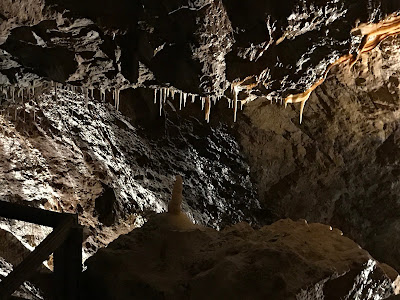 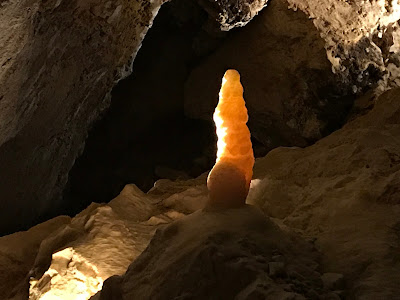 The amazement of astonish flourished all desires and confirmed that Glenwood Caverns was indeed an awesome waypoint.  Simply Marvelous! 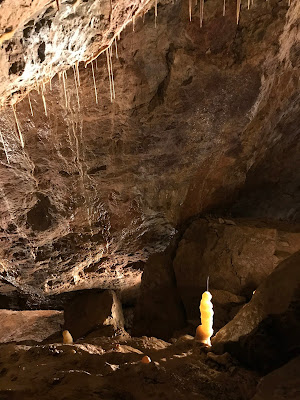 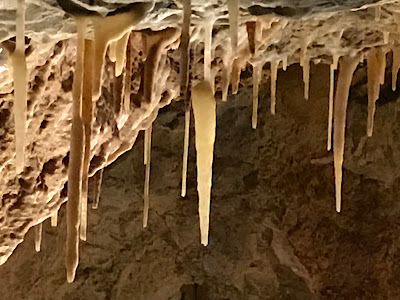 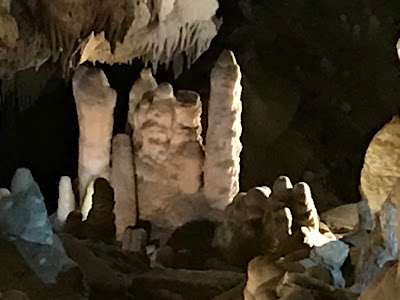 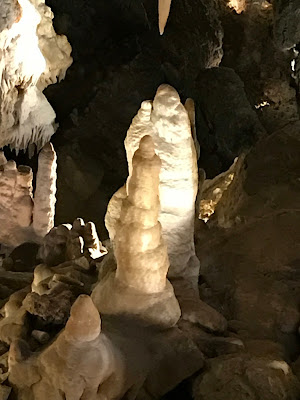 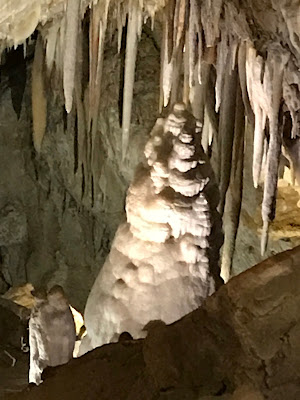 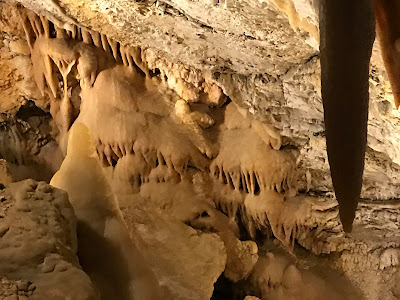 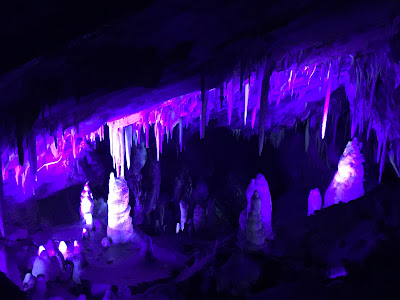 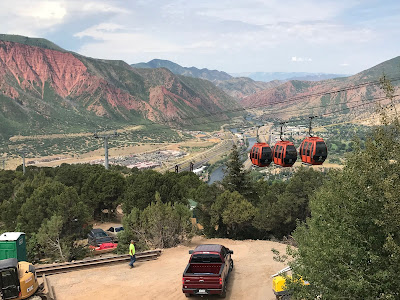 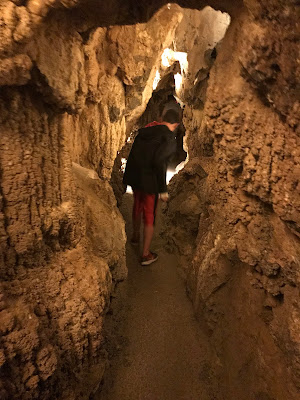 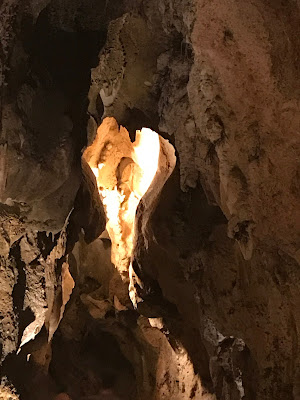 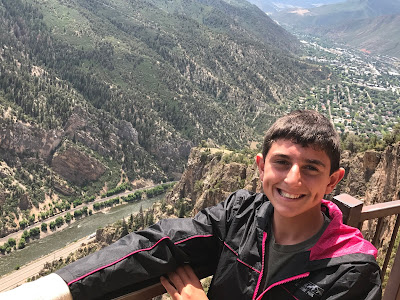 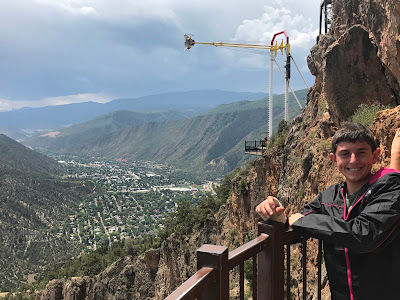 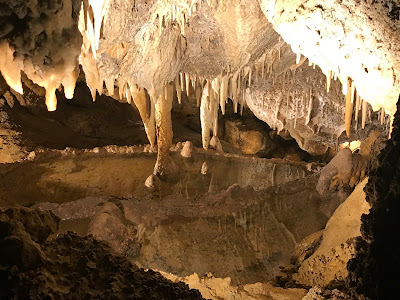 There are several hiking trails in the area.  We were destined to go visit one, forget the name, think it was like floating log, or something, but obviously we did not go there.  The tiny town was under road construction and it created a huge traffic cluster.  Rolling around in our RV, I'm not as nimble as I could have been.  I ended up driving over a bridge and found myself on the 82 towards Aspen.  Since inevitably I was going the way anyhow, we skipped the hike for our next rendezvous.
Posted by Jeremy Jacobus at 6:57 PM