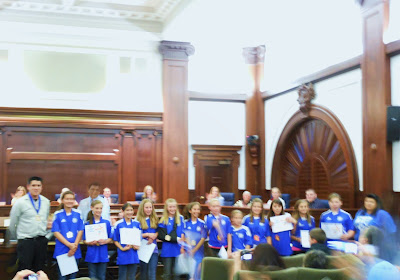 This has become quite a popular area for me lately.  On this day, I trekked down from Rancho Conejo Road and turned left before reaching the Hill Canyon Water Treatment Facility.  I jogged toward the 400 year old oak trail but went up to Happy Valley.  There are still many unique places to explore back here but today I ventured down a single trek which took me under a tree oasis in Happy Valley.  This is just past the abandoned car in Happy Valley if you are coming from this direction.  I completed the look by tramping back to the Abandoned Car Trail from this direction and then back up the Gateway to the Arroyo Trail.  Essentially, I have made several figure 8 trails off the beaten path over the last couple of weeks here...

Today was a quick trot after work because we were invited to Ventura City Hall where they honored the Ventura Mighty Vipers for becoming State Champs!  They were also published in the Newspaper a couple of days later, check out the article: www.vcstar.com - Mighty Vipers Win State Cup

Alyssa did not appear in the picture because she was at the hospital :(  --She is recovering well and has been invited to play for the U-13 team when they play for Nationals in Utah in June.  Hopefully she is 100% to participate!  What an honor!

For the first time since beginning this adventure, my New Track's are less than Day's Hiked in a row.  I had to break the rules by hiking yet another duplicate trail.  Although disappointing, especially because I am nearly halfway done, I knew with my vacation next week I would more than make up for it!  That being said, I still hadn't planned anything other than the rental car and 1 hotel room for this upcoming trip.  My focus now was on finishing up the condo so the new tenants could move in on Saturday.  Meanwhile, the old tenant was still lingering around.  --For the past several nights I was helping Alyssa with her Science project.  Now that this obstacle is complete, I can move forward.  I hope to share the results of her experiment but I fear that her father may have thrown away all the hard work that we did...

I did the same exact route as the day before.  I am now 2 New Tracks off pace!  With Sammi and Ziggy, I hiked the upper portion of the park from my backyard right after work.  After that, straight to the condo for more painting and moving out the junk from the previous tenant, who was still sleeping in the garage.  We laid the carpet down on this day so the entire upstairs was finished!

I didn't bring the camera to work today because I figured that I was going to have to rush back home and finish the condo asap.  I made the vacation plans over six months ago and I thought we were leaving on Saturday morning.  So, I opened the folder today at work, month end, crazy!  As it turns out, we were not leaving until Sunday!!!  TGIF.  I finished the month strong by collecting over $65k gross, which is more than 10k in company fee.  No comment on how much of that I get to keep :)  :(!!!

Realizing that I had some time, I took the 20 minute drive up to Happy Camp, not to be confused with Happy Valley, and I hiked past the golf course along the main route.  I have still yet to loop the entire area and today was not going to be the day.  However, I took some time to explore the right fork and then ventured off a single track from there.  Neat area, but overall, quite boring.  There was some puddles from off and on rain but there was no significant water flow...

Another rainy day in California!  Jess and I spent the morning cleaning out the condo and by mid afternoon, the new tenants were ready to move in.  We got this done just in the nick of time!!!  Before heading home to begin packing, we drove up to Mussel Shoals and hiked the beach in the rain.  Looking ahead at the forecast in the Pacific Northwest, we better get used to this.  Just like last week, I was hoping to see some crazy waves but nothing like that.  I saved the camera for the trip so no way I was going to get it wet!
Posted by Jeremy Jacobus at 12:27 PM