Over the years, I have pretty much driven the entire I-90 Freeway across the country - in sections.  The most scenic stretch, in my opinion, is between Seattle to Spokane.

On my last visit to Seattle, I drove through the long tunnel to Bellevue.  I thought this was a very neat start for such an awesome Interstate.  In Bellevue that day, I hiked: Day 507: Cougar Mountain.

On this trip, I picked up from where I left off at last time and this is where the freeway climbs into the elevations, through the wintry weather mix, mountains and lakes before finally settling into Spokane.  Sorry, pictures not included.

In the pic above, I believe this is much further east, near Bozeman.  We had just picked up the RV from Missoula, Montana and in route to Yellowstone, we drove into the night where basically we were snowed out.  It was a complete white out!


This time of year, many roads were closed.  Originally I had planned to drive through Yosemite and exit to the South.  Take Route 89 down but shortly after the turnoff to Lamar Valley, the road was closed for plowing, as it is for every winter season.  However, the Lamar Valley Road was open, so we could in theory drive from West to East.  But, that wasn't going to work because we needed to head south - so after the long drive to the park entrance, a hike at the Hot Springs, an hour drive into the Valley - we U-Turned and drove all the way back to the 15 Freeway.  The Detour cost us 4-5 hours; but it was well worth it! 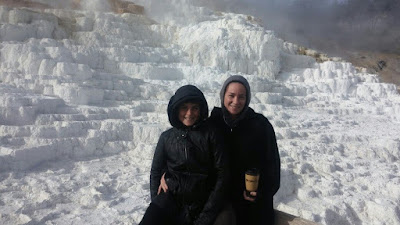 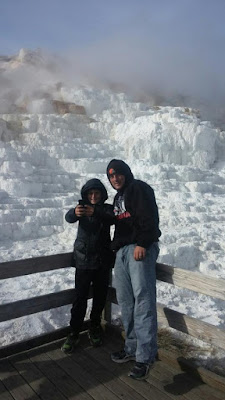 Although we could not drive to Old Faithful, the Hot Springs Trail was awesome.  Jess and Ayden went back to the RV while I extended the hike an additional mile.  I wish I had more to share about this spot, but, really, you should go there for yourself to enjoy it.  This is not the earth you know and it is what they say it is - Discovery TV in real life- AMAZING!

These guys were amazing, but be careful and don't get out.  The seem friendly enough and if you get them to bahhh, their tones are wimpy weak.  Nevertheless, I heard recently that a Bison in Yosemite attacked someone who got out of their car and got too close.  I don't recall the outcome of this, but I don't think it was good.

At one point, we did see a very large grizzly cross the road.  This was in the heart of Lamar Valley.  Big Bad Dude just strolled across the roadway and did not care about anything.  About a half mile out, you could see the herd of bison react and change their grazing course to avoid the encounter.  So it is true, the Bear is the King of the Jungle.  Hmm, well - at least the King of Lamar Valley.  I'm sure a Lion would have something to say about my last statement...
Posted by Jeremy Jacobus at 8:27 PM