***This Tripometer is not really based on anything other than the fact that I got out of the RV a few times and walked around.  Perhaps I hiked more than a mile but, - I will never tell!

Our I-15 Series Spring Break trip lead us right through Idaho Falls.  This marked our 2nd night rest period in the RV.  I did not have an absolute planned itinerary but after the long day in Yellowstone and hundreds of miles of driving into the night, parking in the heart of the city seemed magical.  Sleeping through the night was tranquil.  The gentle horseshoe surrounding falls vibrated like a soft fan tranquilizing you to sleep pleasantly.  Of course, my wife and son were already asleep so when they awoke, what a pleasant surprise: 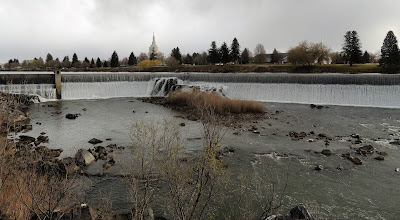 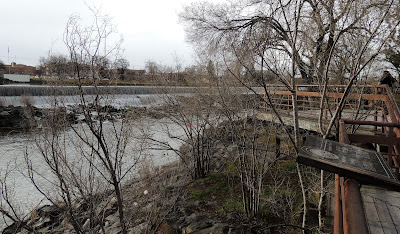 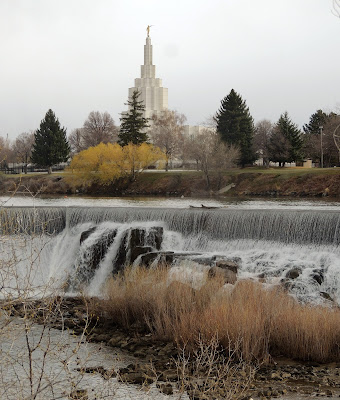 We cooked up some breakfast, walked around the Snake River spill - perhaps a half mile, and then continued on with our trip...

Continuing down I-15, we detoured to the west on I-85.  Heading towards the city of Twin Falls, we randomly drove over this bridge... 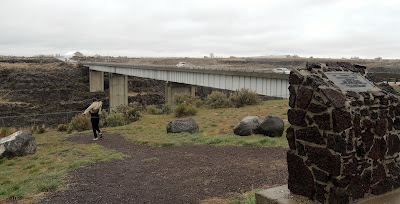 Looking back at the map now, at one point before this bridge it appears that the Snake River really opens up, like a lake.  Before this trip, who even knew about the Snake River.  If I were to ever be on Jeopardy - Well, I would probably still get the answer wrong.  That said, Idaho is not just a potato.  I guess I had some uneducated biased opinion that it was no different that Iowa - not that there is anything wrong with Iowa mind you, as I did go there and find caves, but still, Idaho is the real deal.  In fact there were other places that I would have liked to stop - but this is what I chose and I call it a good choice, as you will soon see:

Some call it the Niagra West of the Mississippi.  This is about 2 hours from Idaho Falls, we were still waking up, if you will, driving in my pj's and what a mystical site to see on an off drizzle day.  The picture above is nice, but being there was incredible.


I took a bazillion more picture here, but this is all you get.  Carry on...


Important Notice:
Heading back on I-84, (I-85 earlier is a short freeway for connection purposes only - I-84 triangles your direction), about 1 1/2 hours in you will enter Utah.  Now pay attention!  There will be a Rest Area or View Point off to the right.  STOP THERE!!!  Holy Crolly - I did not.  I could tell from the freeway that the vantage point would have been amazing to see all the way across the entire Great Salt Lake.  However, I was driving so well and so determined, I figured nah, I'll just get the next one.

Well guess what - that never happened!  Instead, we kept driving to Salt Lake City, first time and about 1 1/2 hours from the border.  We drove around the downtown and saw nothing but Mormon Churches, or are they Temples?:

From what I could tell, there were some industrial revolutions happening around the low lying areas to the Salt Lake.  We made an effort and had a recreational site in mind, but eventually U-Turned there, googled up an RV Park - not some camping area but ended up being a place where people lived and housed a few unsuspecting folks like myself to stay the night, dump the shit, fill the water and re energize for the rest of the trip.  The pit stop was needed, not so bad but hardly rewarding.

That next morning, we stopped at a Cabellas, never been before, but my wife and I each had credit cards which, okay, no comment, but the store was amazing!  We bought some fudge there but I can't seem to find any pictures?  Anyhow, that was my Great Salt Lake Experience!  No complaints because the waterfalls before them were dope!

-Make Every Moment Yours - No Matter What!
Posted by Jeremy Jacobus at 7:33 PM