For Directions to this Trailhead, please click the link below.  This will also guide you through the first 3 miles of the trail:


I was inspired to do this trek today by a guy that I somewhat inspired myself, Chris Novak who is on Day 247 or so of his 1000 Hike Adventure.  So, I opened an invite Thursday afternoon and on Saturday Morning a restless group of natives joined me:

Chris was actually taking the same picture standing right next to me.

Ryan: I hadn't seen in many years.  I went on many overnight expeditions with this guy, including the Sespe Hot Springs and Mt. Baldy (these were both before my 1000 Days).  I used to work with him but he has since graduated into life - living life.  Good Job Ryan for conquering this world and marrying someone who supports and enjoys these adventures with you.

Ayden: My boy is growing and I'm so proud of how well he did on this journey.  He carried a heavy pack and trekked strong in the front with Ian as I was trying to reestablish my body.  Love you son!

Ian: I still work with him but I honestly don't see him much.  My last real encounter with Ian was on Day 1000: Mt. Whitney.  Ian has the legs, skills, mindset and adventure for this stuff.  I sure hope that I will be able to share some more experiences with all these guys - and others who could not come on such short notice.

Eugene: Ironically enough, Ian's friend, who I didn't think I met before - well I actually did once.  About 8 years ago when I climbed Mt. Baldy for the first time, with Ryan and many others, he was on that overnight!  He took the ski lifts that day with another group while me and the hardcore group took the heavy packs up the Ski Hut Trail.  It was a pleasure meeting you again.


The above picture is courtesy of Chris Novak: crotalus84.blogspot.com.  I actually grabbed this pic and many others that you will see below from his FB page.  As I was, he is way behind on his blog but I can't wait for him to relive this trip and share it with the world.

After the unnamed camp on the map, where I camped at four years ago, we crossed the creek as seen in the above pic and began the climb into the wilderness.  The creek levels up to this point were much lower than last time.  A bit disappointing but made easy to cross the water - except for Ayden who slipped his foot in several times.


The initial climb wasn't bad.  Years ago it was and should still be considered too sketchy for very young ones.  However, after a few easy switchbacks, you level out again and gradually incline to the next spot.

Up to this point, the trail is in pretty good shape.  This will be the last sign you see though.  It's never an issue where you can't make out which way to go.  Follow logic.

From the No Name Camp, it's only 1.1 miles and about 300 foot elevation gain to Middle Matilija.  This is a great place to camp.  The spot is open and has several different fire pits.  It could support very large groups.  From the car, it's about 4 miles and 800 foot gain - easy!

We didn't take very long rests but at the camps or other spots where it made sense, we stopped so that the lagers (me - lol) could catch up.  Thank you Ian because you could have easily gotten to Maple in half the time.


The spot in the pic above was our most important rendezvous - yet we didn't know it at the time.  Each group brought their dog - but I did not bring my Sammi on this trip.  I guess, just as well.  Eventually when the trail becomes overgrown it is flourishing in ticks, and it's not even really tick season so just imagine.

Blitz was pulling at that root in the water and eventually severed it off the tree.  Good Job Dog!

After the pause, the fun - the pain - begins.  If you are not feeling 100%, then just turn back here and go home or camp at Middle Matilija.  Otherwise, you are about to enter the treacherous switchbacks under the open sun of God's rays.  Okay, so they are not that bad or that long, but they will make you think.  In the summer months the temperature often climbs over 100 degrees so you really may want to rethink this.  --The climb itself on this part is only about 500 feet - no big deal...

Care of Chris Novak, dressed in Orange, I rest!  At this point, I was still relatively close with the lead group, but Ryan had been lagging pretty badly, which was fine with me - as long as he caught up, which he did.  This desirable spot is where we discovered ticks on ourselves and dogs.


We also filled up our water here but it was not necessary.  There is plenty of water spots all the way up but we were all running low so we pumped the creek for what it was worth.


For the past 30 minutes I had been hiking all alone.  This may have been my most enjoyable part of the trip.  It was a challenge.  My older fat body was questioning each step.  It technically was not very difficult but I was just slow - still faster than Ryan :)

In the pic above, you miss the scope of what is actually happening here.  The creek weaves into the small rock canyon and you climb slightly above.  It's really a neat - rewarding spot!

"The Tree" was at "The Camp".  We were all pretty spent at this point.  We had blown right past Upper Matilija Camp a while back.  There was a daring family who set up camp there.  I would not recommend camping at Upper Matilija.  I mean, it's okay, but Maple or Middle Matilija are much better camps.  Of course, there are nearly a dozen other random spots, such as this one above, which would be perfect for one or two tents.  My son calls them, the pre-camps.  So, let's move on to our final destination... 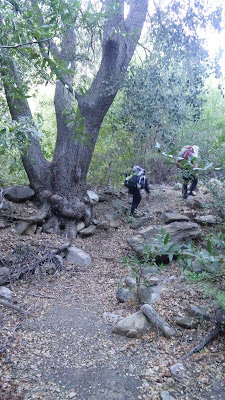 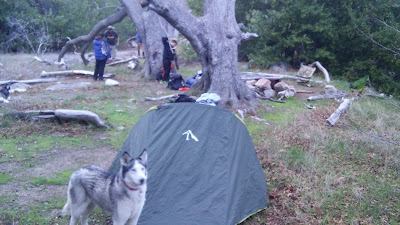 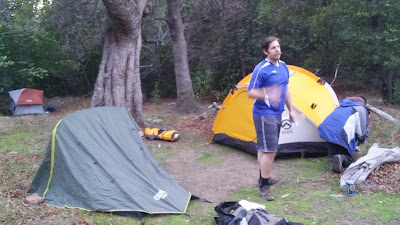 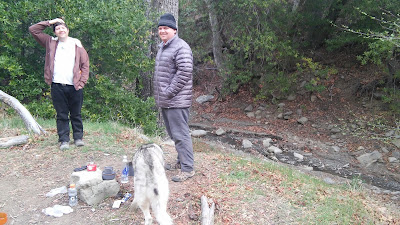 For dinner I made lobster!  I prepared it with butter behind the shell, squeezed lemon juice all in it and sprinkled some lemon pepper on it. I then smothered it in some more butter, wrapped it in foil and by the time I ate it, it fell right off the shell into my mouth.  So Good!

A couple hours into the night we saw a couple of random headlights coming down from Ortega.  It was an off duty Ventura County Sheriff hiking with his buddy who was a Boy Scout Troupe leader.  These guys were the real deal!  They got dropped off on the 33, hiked up the closed Cherry Creek Road, to Ortega, which is an off road motorcycle trail.  They camped with us here and got picked up at the trailhead the next morning.

Maple Camp is perfect.  Many spots - and even more places to wander off if you just want to be alone and look at the stars.  Even a bench tree fallen for your comfort.  The creek level was a bit more than a trickle, yet enough to refill the water.

***That next morning, Ayden and I started off the mountain first...

With gravity on our side, we just rushed off that mountain in just a few hours.  At the end, I was so sore, rolled the ankle with the high ankle sprain and we were out of water!  Rather than refill, we just rushed to our car, drove to McDonalds and drank down an extra large Strawberry Fanta.  I don't know, it just sounded good.  I also heard the other guys made it out - MISSION COMPLETE


First sign of the poison found at Mc Donalds.  As I write, I itch all over.  At last some of my most precious parts have been spared - this time.  Like I said, the trail was overgrown at parts.  You don't need to bushwhack but you will stir up the poison oils! 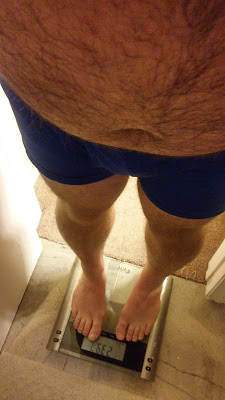